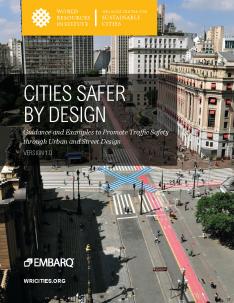 Cities Safer by Design is a global reference guide to help cities save lives from traffic fatalities through improved street design and smart urban development. Over 1.2 million people die in traffic crashes globally, mostly pedestrians, and that number is growing every year. This hands-on guide taps examples from cities worldwide and includes 34 different design elements to improve safety and quality of life.

This report is made possible through funding from Bloomberg Philanthropies.

More than 1.3 million people are killed in traffic crashes worldwide, making traffic fatalities one of the leading causes of death in cities, especially in developing countries. Children, elderly, and poor people are particularly vulnerable. The report from WRI Ross Center for Sustainable Cities and made possible through funding by Bloomberg Philanthropies includes more than 30 specific urban design recommendations for urban planners and policymakers.

Cities Safer by Design emphasizes two ways to improve traffic safety in cities. First, by building and retrofitting urban environments to reduce the need for individual vehicle trips; and second, by reducing vehicle speeds in areas where cars, pedestrians and cyclists mix. The report focuses on improving infrastructure for pedestrians, bicycling, and mass transport.

The report includes examples from specific cities. Tokyo, a dense, but transit-oriented city, has a traffic fatality rate of 1.3 per 100,000 residents compared to Atlanta, Georgia, which has 9.7 per 100,000 residents. Many cities in low- and middle-income countries have higher accident rates, or lack adequate data reporting. In addition, the report provides on-the-ground examples from Mexico City, Rio de Janeiro, Istanbul, New York, Paris and more.

Many of the world’s cities can become safer, healthier places by changing the design of their streets and communities. Where public streets have been designed to serve primarily or even exclusively private motor vehicle traffic, they can be made immensely safer for all users if they are designed to effectively serve pedestrians, public transport users, bicyclists, and other public activity.

This is currently not the case in many cities. Traffic fatalities account for 1.24 million annual deaths, with over 90 percent of global traffic deaths occurring in low- and middle-income countries (WHO 2013). Currently estimated to be the eighth leading cause of death worldwide, this is expected to become the fifth leading cause of death by 2030 at current trends. The majority of these fatalities are vulnerable road users—pedestrians and bicyclists in developing countries who are usually hit by motorized vehicles (WHO 2009).

These deaths can account for hefty tolls on economic development, with traffic deaths amounting to 3 percent of gross domestic product (GDP) in India and Indonesia, 1.7 percent in Mexico, 1.2 percent in Brazil, and 1.1 percent in Turkey (WHO 2013). Almost half of all traffic fatalities occur in cities; a larger proportion of serious road traffic injuries occur in urban areas and involve vulnerable road users (Dimitriou and Gakenheimer 2012; European Commission 2013).

This global health issue is being pushed by large underlying forces. Across the world—especially in places such as Brazil, China, India, Mexico, Turkey, and other emerging economies—people are buying private cars or motorcycles at a galloping pace. The world’s car population has already passed 1 billion and is expected to reach 2.5 billion by 2050 (Sousanis 2014). The percentage of the world’s residents living in cities will increase from 50 percent in 2007 to 70 percent in 2030 (UNICEF 2012). Urban land areas are expected to double by 2020 from 2000 levels (Angel 2012). Between considerable population and economic growth, there is enormous demand for new housing and urban expansion, with streets and the public space network linking everything together.

A common response to all of these issues is to build roads and design communities for automobiles. Yet this is just a short-term solution to ease traffic or improve safety only for drivers, and in time will only stimulate more growth in car use, a need for even more roads, and more overall traffic fatalities (Leather et al. 2011).

There is another path. Cities can design streets and the built environment to be safer, not only in new communities, but also by transforming existing neighborhoods and streets. Considering a comprehensive street network and the hierarchy of its users can reveal opportunities not only around critical transit corridors, but in the surrounding neighborhood streets. This is called a “safe system” approach to traffic safety. It sets targets and works to change the road environment to reduce injuries and fatalities (Bliss and Breen 2009).

Through its EMBARQ sustainable urban mobility initiative, WRI Ross Center for Sustainable Cities has created this guide to provide real-world examples and evidence-based techniques to improve safety through neighborhood and street design that emphasizes pedestrians, bicycling, and mass transport, and reduces speeds and unnecessary use of vehicles.

The guide provides an overview in chapter 2 on the current conditions for traffic safety in cities, the different groups of people impacted by safety, and what it means to make cities “Safer by Design” through urban and street design that improves safety for all road users.

The rest of the guide—chapters 3 to 8—provides descriptions of the different measures and elements that make up the key design principles to promote safety. These principles are composed of the following themes, and can be found in positive examples from cities across the world.