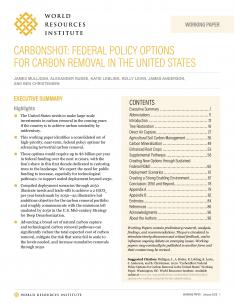 This Working Paper is part of Carbon Removal within our Climate Program. Reach out to Carrie Dellesky for more information.

This Working Paper is part of Carbon Removal within our Climate Program. Reach out to Carrie Dellesky for more information.

CarbonShot: Creating Options for Carbon Removal at Scale in the United States

Avoiding the worst impacts of climate change will require not only steep reductions in emissions but also the removal of carbon dioxide (CO2) from the atmosphere at a massive scale (aka, carbon removal). The United States needs to make large-scale investments in carbon removal in the coming years—up to $6 billion per year in federal funding over the next 10 years, with continued support for scaled deployment beyond 2030—if the country is to achieve carbon neutrality by 2050. Compiled deployment scenarios through 2050 illustrate needs and trade-offs to achieve a 2 GtCO2 per year benchmark by 2050—an objective roughly commensurate with the emissions left unabated by 2050 in the U.S. Mid-century Strategy for Deep Decarbonization.