Foundational Questions on Carbon Removal in the United States 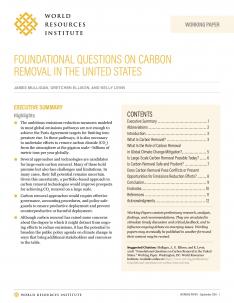 This working paper is part of a World Resources Institute (WRI) publication series CarbonShot: Creat­ing Options for Carbon Removal at Scale in the United States. The series presents findings from a WRI-led assessment of needs for scaling candidate carbon removal approaches and technologies in the United States.

This working paper serves as a primer for U.S. policymakers and the climate community on several foundational questions associated with carbon removal, including the following:

Advancing carbon removal is an exercise in creat­ing options through research, development, early-stage deployment, and other efforts to address major challenges. Each of the candidate approaches faces its own set of challenges, potential pitfalls, and limi­tations. Given the uncertainty, a portfolio of approaches and technologies could yield greater chances for achieving large-scale benchmarks for carbon removal.

Competing arguments have surfaced about the potential benefits and risks of introducing carbon removal to global climate action efforts. Some argue that carbon removal could introduce new demands for scarce mitigation resources or be used by policymak­ers to justify delays in emissions reduction efforts. Others argue that carbon removal could broaden the public policy agenda on climate change in ways that bring additional interests and resources to the table and yield new coali­tions for making progress.

Carbon removal may yield benefits as well as pose risks for people and ecosystems. Potential benefits relate to improved soil health, agricultural productivity, and a range of ecosystem services, as well as prospects to create new markets and industries. If deployed without proper safeguards, however, some approaches could result in the displacement of food production or the loss of natural ecosystems, or fail to deliver expected climate benefits. Managing these risks will require effective policy safeguards and the ability to measure and monitor deploy­ment to ensure safeguards work as intended.

Carbon removal is the process of removing CO2 from the atmosphere and storing it. Carbon removal is intended to help address global temperature rise by reducing atmospheric concentrations of CO2, a major greenhouse gas.

If deployed successfully at a large scale, carbon removal could substantially contribute to limit­ing global temperature rise. Global scenario analysis indicates that the prospects of achieving the temperature targets established in the Paris Agreement are greatly improved if CO2 can be removed on a large scale. The need for carbon removal intensifies if the world is unable to make deep reductions in global emissions by 2030. Other measures that are currently excluded from global models because they are viewed as too costly, or because adoption is driven by factors other than cost, could also help to achieve temperature targets. Such measures include noncoercive population growth reduction and widespread lifestyle changes such as shifting diets to less greenhouse-gas-intensive foods. However, even then, global scenario analysis suggests the global economy will need to reach carbon neutrality in the second half of the century to maintain a likely chance of achieving the Paris Agreement targets. Achieving carbon neutrality without carbon removal would require eliminating all emissions, including from sectors like aviation that are difficult to fully decarbonize.