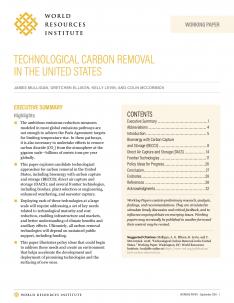 CarbonShot: Creating Options for Carbon Removal at Scale in the United States

The purpose of this working paper is to explore the potential for technological carbon removal in the United States, identify needs likely to arise on the pathway to large-scale deployment, and consider ways to begin addressing those needs. This working paper is part of a World Resources Institute (WRI) publication series CarbonShot: Creat­ing Options for Carbon Removal at Scale in the United States. The series presents findings from a WRI-led assessment of needs for scaling candidate carbon removal approaches and technologies in the United States. This paper focuses on the technological options, including bioenergy with carbon capture and storage (BECCS), direct air capture with storage (DACS) and frontier technologies. It concludes by describing a series of near-term policy ideas that could help begin to address these needs in the United States.

Several emerging technologies offer the prospect of removing CO2 from the atmosphere at a large scale in the United States. These technologies will require significant and sustained policy investments in continued technological development, enabling infra­structure and markets, and scientific understanding of net climate benefits and ancillary effects. Developing capa­bilities for large-scale technological carbon removal may prove critical for stabilizing global temperatures, given the overall apparent need for carbon removal and limitations on land management approaches to carbon removal.

BECCS can take many forms—in several different sectors with several different biomass feedstocks. The net climate benefits and ancillary effects of these forms vary widely. Some forms of BECCS could be detrimental for food security and natural ecosystems. Some forms provide emissions reduction but not carbon removal. Some forms may not provide climate benefits at all, given direct and indirect land use change and other accounting issues. Appropriate safeguards and proper accounting would be needed to ensure that the deploy­ment of BECCS is beneficial. These safeguards would inevitably limit the potential scale of carbon removal achievable with BECCS.

Developing capabilities for deploying BECCS at a large scale principally entails driving down the cost of CCS technology, building out CO2 transport infrastructure and storage operations, and resolv­ing persistent uncertainties related to net climate benefits and ancillary effects. Deploying beneficial forms of BECCS at scale would also require developing supply chains for feedstock derived from sources other than dedicated energy crops, such as forest byproducts, agricultural residues, and municipal waste.

There is no obvious way to bound the technical potential of DACS. Its economic potential is cur­rently limited by high costs and intensive require­ments for low-carbon energy inputs. But costs appear to be lower than previously estimated, and contin­ued technological development could further reduce them. Geological storage capacity in the United States appears to be sufficiently large, although sites must be individually validated.

Developing capabilities for deploying DACS at a large scale principally entails driving down the cost of the technology and building out CO2 stor­age operations. Markets for CO2 utilization products could also help support early-stage deployment for DACS systems. Additionally, because DACS requires a significant amount of low-carbon heat and power, the prospect of its deployment at scale in the United States could have impli­cations for the desired composition of the U.S. energy sector in the coming decades.

Additional research, development, and demon­stration (RD&D) are needed to advance promising frontier technologies and identify new technolo­gies. Progress in technological development and related scientific inquiry would help provide clarity on whether these emerging technologies could be brought to scale and bring to light the kinds of investments needed to do so.

Investing in three categories of action could help address key needs across a portfolio of carbon removal technologies: RD&D, deployment sup­port, and advancements in fossil fuel carbon capture, storage, and utilization. Sustained RD&D and learning-by-doing play significant roles in technology development and cost reduction. Government support and the development of markets for products that utilize CO2 are likely to be critical in driving early deployment. Accelerating the deployment of CCS in fossil fuel facilities could be catalytic in driving CO2 transport, storage, and utilization technologies. Adopting CCS in existing biore­fineries—a relatively low-cost proposition—could have a similar effect.

Carbon removal technologies are likely to rely on regulatory mandates or carbon pricing mecha­nisms to be deployed at large scale on a sustained basis. Carbon removal technologies provide a public good. To the extent that they also provide valuable private goods (e.g., energy or products), the goods are not cost-competitive with goods produced by other means without explicit or implicit carbon pricing. Furthermore, although CO2 utilization markets may play a critical role in sup­porting near- to medium-term deployment experience, they are unlikely to fully support sustained deployment at the scale envisioned in global climate models. As a result, addressing the needs identified in this paper across the portfolio of carbon removal technologies is essential but insufficient on its own without some form of carbon pricing.

Heightened abatement of greenhouse gas (GHG) emissions is needed to achieve the goals of the Paris Agreement and limit warming to well below 2˚C, with efforts to limit warming to 1.5˚C, to avoid the most dangerous climate impacts. Furthermore, most scientific estimates show that to keep these goals within reach, the global emissions trajectory must not only reach net-zero1 by the second half of this century but also continue downward into net-negative emissions. Global climate models therefore illustrate the need to pursue both aggressive emissions reductions and significant deployment of carbon removal.2 They rely upon carbon removal approaches to offset the last remaining GHG-emitting activities that are too challenging or expensive to eliminate, and to compensate for any temporary overshoot of temperature goals.

Carbon removal is the process of removing CO2 from the atmosphere and storing it. It is distinct both from solar radiation management, which seeks to reflect incoming sunlight to reduce warming rather than remove carbon from the atmosphere, and from carbon capture and storage (CCS) from point sources of emissions such as fossil-fueled power plants or industrial facilities. Approaches to carbon removal traverse a spectrum from land management approaches to technological options, including carbon management in agricultural soils, forests, and agroforestry; BECCS3; DACS; and frontier technologies such as biochar, plant breeding or engineering,4 enhanced weathering, and seawater capture. The intention of carbon removal is to store CO2 in plants, soils, and oceans, as well as nonbiologically in geological formations and products (e.g., building materials), augmenting the net transfer of carbon from the atmosphere that naturally takes place as part of the carbon cycle (Minx et al. 2018). In some cases, storage is permanent; in others the CO2 may return to the atmosphere over time.

Carbon removal is intended to help address global warming by reducing atmospheric concentrations of the primary greenhouse gas, CO2, accelerating or augmenting the net transfer of CO2 from the atmosphere.

To-date, a gap exists between the need for rapid emis­sions reductions to stabilize the climate at the tempera­ture targets established in the Paris Agreement and the availability of cost-effective measures that can provide those reductions (UNEP 2017). Advancements in carbon removal can help close that gap. However, each carbon removal approach available today faces its own challenges, potential pitfalls, and limitations. The full potential of each remains uncertain. Given this uncertainty, a portfolio of approaches and technologies could yield greater oppor­tunities for achieving large-scale carbon removal (Minx et al. 2018; Fuss et al. 2018).