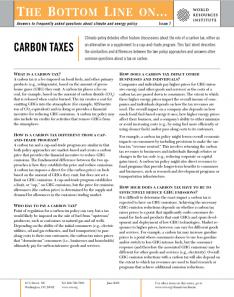 Climate policy debates often feature discussions about the role of a carbon tax, either as an alternative or a supplement to a cap-and-trade program. This fact sheet describes the similarities and differences between the two policy approaches and answers other common questions about a tax on carbon.

What is a carbon tax?

A carbon tax is a fee imposed on fossil fuels, and other primary products (e.g., refrigerants), based on the amount of greenhouse gases (GHG) they emit. A carbon tax places a fee on coal, for example, based on the amount of carbon dioxide (CO2) that is released when coal is burned. The tax creates a cost for emitting GHGs into the atmosphere (for example, $25/metric ton of CO2-equivalent) and in doing so provides a financial incentive for reducing GHG emissions. A carbon tax policy may also include tax credits for activities that remove GHGs from the atmosphere.

How is a carbon tax different from a cap-and-trade program?

A carbon tax and a cap-and-trade program are similar in that both policy approaches are market-based and create a carbon price that provides the financial incentive to reduce GHG emissions. The fundamental difference between the two approaches is how they establish this price and reduce emissions. A carbon tax imposes a direct fee (the carbon price) on fuels based on the amount of GHGs they emit, but does not set a limit on GHG emissions. A cap-and-trade program establishes a limit, or “cap,” on GHG emissions, but the price for emission allowances (the carbon price) is determined by the supply and demand for allowances in the emissions trading market.

Who has to pay a carbon tax?

Point of regulation for a carbon tax policy can vary, but a tax would likely be imposed on the sale of fuel from “upstream” producers, such as coal mines or natural gas and oil wells. Depending on the ability of the initial consumers (e.g., electric utilities, oil and gas refineries, and fuel transporters) to pass along costs to their own customers, the carbon tax raises prices that “downstream” consumers (i.e., businesses and households) ultimately pay for carbon-intensive goods and services.

How does a carbon tax impact other businesses and individuals?

Companies and individuals pay higher prices for GHG-intensive energy (and other goods and services) as the costs of a carbon tax are passed down to consumers. The extent to which these higher energy prices impact the overall income of companies and individuals depends on how the tax revenues are used. The overall impact on a company also depends on how much fossil fuel-based energy it uses, how higher energy prices affect their business, and a company’s ability to either minimize or avoid increasing costs (e.g., by using fuel more efficiently or using cleaner fuels) and/or pass along costs to its customers.

For example, a carbon tax policy might lessen overall economic impacts on consumers by including provisions to make the carbon tax “revenue neutral.” This involves returning the carbon tax revenues to businesses and individuals through rebates or changes in the tax code (e.g., reducing corporate or capital gains taxes). A carbon tax policy might also direct revenues to fund programs that provide longer-term benefits to consumers and businesses, such as research and development programs or transportation infrastructure.

How high does a carbon tax have to be to effectively reduce GHG emissions?

It is difficult to determine the exact impact a carbon tax is expected to have on GHG emissions. Achieving the necessary GHG emission reductions depends on whether a carbon tax raises prices to a point that significantly curbs consumer demand for fuels and products that emit GHGs and spurs development and deployment of low-GHG technologies. Market responses to higher prices, however, can vary for different goods and services. For example, a carbon tax may increase gasoline prices to a point where consumers choose to use less gasoline and/or switch to less GHG-intense fuels, but the consumer response (and therefore the associated GHG emissions) may be different for other goods and services (e.g., electricity). Overall GHG emission reductions with a carbon tax will also depend on the extent to which tax revenues are used to fund research or programs that achieve additional emission reductions.

How does a carbon tax impact lower-income consumers?

The overall impact of a carbon tax on lower-income consumers depends on how the tax revenues are handled. A basic carbon tax, like most consumption taxes, is regressive lower-income consumers pay a relatively higher percentage of their total income for goods and services affected by the tax. Some carbon tax programs seek to address this by “recycling” tax revenues to fund rebates or programs (e.g., Earned Income Tax Credits or energy efficiency upgrades), or allow reductions in other regressive taxes, such as state sales taxes or federal payroll taxes.

How does a carbon tax affect international competitiveness of U.S. industries?

Impacts to an industry largely depend on the level of the tax, how tax revenues are recycled, how much energy the industry uses, and the industry’s competitive position in domestic and international markets. The overall affect on competitiveness will therefore differ by sector, and by firm, as the tax could adversely affect some individual industries and have limited impacts on other sectors. Some argue a tax would disadvantage domestic manufacturers by creating a significant cost penalty for doing business in the United States, but others argue a carbon tax encourages new innovations and efficiencies that benefit long-term competitiveness.

Have other countries implemented a carbon tax?

Beginning in the 1990s, Sweden, Finland, the Netherlands, and Norway implemented carbon taxes as part of efforts to reduce GHG emissions. Similar policies, focused on taxing energy use, are in place or under discussion in other European countries and Japan. Most recently, the Canadian Province of British Columbia established a tax on fossil fuels that starts at C$10 (approximately US$9.80) per metric ton of CO2-equivalent and increasing to C$30 (US$29.35) per metric ton by 2012. The tax is “revenue neutral” as revenues generated will be returned to consumers through tax credits, rebates, and lower corporate and personal income taxes.

For additional information on international experience with carbon taxes, see the Organization for Economic Co-operation and Development’s resources on Energy Prices and Taxes at www.oecd.org or search “Energy/carbon taxes” at www.epa.gov for a summary by the U.S. Environmental Protection Agency.

What are the political prospects for a carbon tax in the United States?

Proposals for a carbon tax, as with other proposals for new taxes, have been politically sensitive in the United States. However, there are limited examples of carbon tax policy approved at municipal levels, including a recent measure to impose a fee of $0.044 per metric ton of CO2 emitted by businesses in the San Francisco Bay Area. In terms of national policy, there have been various proposals over the past two decades to create a national carbon tax (or a similar tax program). The Clinton Administration was unsuccessful in its efforts to implement a “BTU tax” in 1993, which was not a carbon tax, but an energy tax based on the heat content of fuels (as measured in British thermal units or BTUs). More recently, in 2007, two carbon tax bills were proposed in the House of Representatives. None of these proposals have gained sufficient political support and legislative debate to date has focused primarily on cap-and-trade policy.