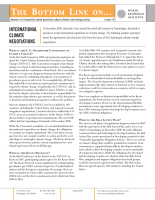 In December 2009, diplomats from around the world will convene in Copenhagen, Denmark to decide on a new international agreement on climate change. The following questions and answers address the agreements and structures that form the basis of the Copenhagen climate change negotiations.

What is the U.N. Framework Convention on Climate Change?

At the Rio Earth Summit in 1992, international negotiators adopted the United Nations Framework Convention on Climate Change (UNFCCC). This Convention recognizes that climate change is real and results from human activities, including deforestation and the combustion of fossil fuels. The Convention’s objective is to prevent dangerous human interference with the climate system by stabilizing atmospheric concentrations of greenhouse gases at safe levels. To accomplish this, all Parties that ratified the Convention accepted general commitments to respond to climate change. In particular, the UNFCCC calls on industrialized countries, identified as Annex I Parties, to take the lead in climate action due to their historic responsibility for the majority of greenhouse gas emissions, as well as their greater financial and institutional capacity to address the problem.

Since its adoption, the UNFCCC has been ratified by 192 countries, including the United States, and regional economic integration organizations. Countries that have ratified the UNFCCC meet at an annual Conference of the Parties (COP) to discuss further cooperation and commitments. The next COP will be held in Copenhagen, Denmark, in December, 2009.

While the Convention constitutes an essential foundation for international cooperation on climate change, the obligations of countries are largely aspirational. The Convention encourages but does not commit countries to action needed to avert and adapt to catastrophic climate change. The Kyoto Protocol, subsequent decisions and the current negotiations for a new climate agreement all aim to fill this gap.

What is the Kyoto Protocol?

At the third Conference of the Parties to the UNFCCC in Kyoto in 1997, participating nations agreed to the Kyoto Protocol. The Kyoto Protocol is most significant for setting binding greenhouse gas (GHG) emission targets for 37 industrialized nations and the European community. On average, these nations committed to reduce GHG emissions fi ve percent below 1990 levels over the fi rst commitment period, which lasts from 2008 to 2012.

As of July 2009, 183 countries and 1 regional economic integration organization (the European Economic Community) had ratified the Protocol. Although the U.S. signed the Protocol, Senate opposition prevented ratification under President Clinton. Shortly after taking office, President Bush stated that he would neither ratify the Protocol nor enact policies to meet U.S. Kyoto targets.

What is the Bali Action Plan?

What issues will be negotiated in Copenhagen?

Any agreement in Copenhagen will have to address several key topics including:

The Adaptation Fund of the Kyoto Protocol, as well as other multilateral funds with similar goals, channel aid to developing countries to pay for activities (e.g. coastal management planning) to reduce their vulnerability to climate change. These are under-funded and need additional support. Sources and mechanisms for generating and distributing these funds are still under discussion.

Changes in land use account for 12-18 percent of global GHG emissions and will be a key component of addressing the climate challenge. The issue of Reduced Emissions from Deforestation and Degradation (REDD), has become one of the more discussed issues in reaching the next international agreement on climate change. Discussions are currently underway on the types and scope of activities that will be considered when quantifying emission reductions; on the methods by which these will be measured, reported and verified; and on the sources and criteria for financial support by international actors. Processes both within and outside of the formal UNFCCC process are grappling with how this final mechanism will look.

Technology is a key component of the Bali Action Plan. Developing countries such as China and India seek support for climate-friendly technologies to meet their growing energy requirements. This technology support could take many forms, such as joint R&D efforts, shared intellectual property, and foreign funding for energy infrastructure. Developed countries seek to foster enabling environments that allow the development of domestic clean energy products and markets but have also voiced concerns over enforcement of intellectual property rights in developing countries.

Citing their lower historical responsibility for emissions and capacity for action, developing nations have continued to request fi nancial support of their adaptation, technology deployment and forestry efforts. In fact, many countries are making mitigation pledges contingent on delivery of fi nancing from developed countries. While specifi c aid channels have been approved, only a small fraction of what is needed has been delivered.

Will a Copenhagen agreement replace the Kyoto Protocol?

In Bali, negotiations around commitments were split into two tracks. One negotiating group was tasked with determining further commitments for Annex I Parties under the Kyoto Protocol. A second group was tasked with the broader remit of developing a vision for long-term cooperative action that includes both developed and developing countries outside of the Kyoto Protocol framework. This bifurcation is indicative of the two outcomes that may be possible in Copenhagen: