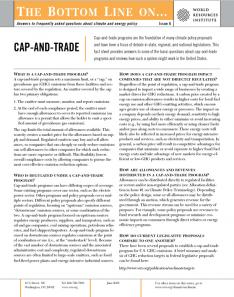 Cap-and-trade programs are the foundation of many climate policy proposals and have been a focus of debate in state, regional, and national legislatures. This fact sheet provides answers to some of the basic questions about cap-and-trade programs and reviews how such a system might work in the United States.

What is a cap-and-trade program?

A cap-and-trade program sets a maximum limit, or a “cap,” on
greenhouse gas (GHG) emissions from those facilities and sectors
covered by the regulation. An emitter covered by the cap
has two primary obligations:

The cap limits the total amount of allowances available. This scarcity creates a market price for the allowances based on supply and demand. Regulated emitters may buy and sell allowances, so companies that can cheaply or easily reduce emissions can sell allowances to other companies for which such reductions are more expensive or difficult. This flexibility lowers overall compliance costs by allowing companies to pursue the most cost-effective emission reduction options.

Who is regulated under a cap-and-trade program?

Cap-and-trade programs can have differing scopes of coverage. Some existing programs cover one sector, such as the electric power sector. Other programs and policy proposals cover multiple sectors. Different policy proposals also specify different points of regulation, focusing on “upstream” emission sources, “downstream” emission sources, or some combination of the two. A cap-and-trade program focused on upstream sources regulates energy producers, suppliers, and transporters, such as oil and gas companies, coal mining operations, petroleum refineries, and fuel shippers/importers. A cap-and trade program focused on downstream sources regulates emissions at the point of combustion or use (i.e., at the “smokestack” level). Because of the vast number of downstream sources and the associated administrative cost and complexity, regulated downstream sources are often limited to large-scale emitters, such as fossil fuel-fired power plants and energy-intensive industrial sources.

p>How does a cap-and-trade program impact companies that are not directly regulated?

Regardless of the point of regulation, a cap-and-trade program is designed to impact a wide range of businesses by creating a market driver for GHG reductions. A carbon price created by a cap on emission allowances results in higher costs for fossil fuel energy use and other GHG-emitting activities, which encourages greater use of cleaner energy or processes. The impact on a company depends on their energy demand, sensitivity to high energy prices, and ability to either minimize or avoid increasing costs (e.g., by using fuel more efficiently or using cleaner fuels) and/or pass along costs to consumers. These energy costs will likely also be reflected in increased prices for energy-intensive products and services, such as electricity and transportation. In general, a carbon price will result in competitive advantages for companies that minimize or avoid exposure to higher fossil fuel energy costs and take advantage of new markets for energy-efficient or low-GHG products and services.

How are allowances and revenues distributed in a cap-and-trade program?

Allowances can be distributed directly to regulated facilities or sectors and/or non regulated parties (see Allocation definition in Issue #1 on Climate Policy Terminology). Depending on the policy design, some or all allowances may be distributed through an auction, which generates revenue for the government. This revenue stream can be used for a variety of purposes. For example, some policy proposals use revenues to fund research and development programs or minimize economic impacts on consumers through direct rebates or energy efficiency programs.

How do current legislative proposals compare to one another?

There have been several proposals to establish a cap-and-trade program for U.S. GHG emissions. A brief summary and analysis of GHG reduction targets in federal legislative proposals can be found here: /publication/usclimatetargets

Who would administer a national cap-and-trade program for U.S. GHG emissions?

Under most federal legislative proposals, the U.S. Environmental Protection Agency would be in charge of administering a cap-and-trade program for GHGs. It should be noted, however, that policy proposals can vary in terms of the regulatory authority granted to various federal agencies and the flexibility provided for program implementation.

How is a cap-and-trade program different from a carbon tax?

A cap-and-trade program and a carbon tax are similar in that both policy approaches are market-based and create a carbon price that provides a financial incentive to reduce GHG emissions. The fundamental difference between the two approaches is how they establish this price and reduce emissions. A cap-and-trade program establishes a limit, or “cap,” on GHG emissions, but the price for emission allowances (the carbon price) is determined by supply and demand for allowances in an emissions trading market. A carbon tax, conversely, imposes a direct fee (the carbon price) on fuels based on the amount of GHGs they emit, but does not set a limit on GHG emissions.

What are some examples of existing cap-and-trade programs?

Cap-and-trade programs that cover GHG emissions include the European Union Emissions Trading Scheme (EU-ETS) which regulates carbon dioxide (CO2) emissions from 11,500 energy-intensive installations in 25 countries. In the United States, 10 states are participating in the Northeast Regional Greenhouse Gas Initiative (RGGI) to reduce CO2 emissions from the electric power sector. There are also other GHG cap-and-trade programs emerging at the state and regional level, including seven states (and three Canadian provinces) participating in the Western Climate Initiative, and six states (and one Canadian province) participating in the Midwest Regional GHG Reduction Accord. Future issues in WRI’s Bottom Line on Climate Policy series will review the lessons learned from other cap-and-trade programs.

What are the critical design issues for cap-and-trade programs?

Cap-and-trade programs consist of several different policy design choices that determine how the overall program operates. For example, the initial level of the emissions cap, and how it is adjusted over time, will influence the price of allowances. Similarly, the allocation of allowances, point of regulation, cost containment mechanisms, and provisions for offsets can all influence how a cap-and-trade program will function. Subsequent issues in WRI’s Bottom Line on Climate Policy series will review these and other design features.