This paper introduces a new method to quantify physical climate risks for power generation projects at the portfolio level. Co-developed by WRI and the European Bank for Reconstruction and Development (EBRD), the approach is designed to be flexible enough to work with portfolios with different levels of data availability, leverage the latest science in climate and hydrology, and use machine-learning techniques such as recurrent neural networks. 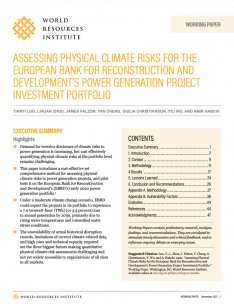 This Working Paper is part of our physical climate risks and water-energy nexus work within our Water Program. Contact Lihuan Zhou for more information.

This Working Paper is part of our physical climate risks and water-energy nexus work within our Water Program. Contact Lihuan Zhou for more information.

This paper pilot tests the method on EBRD’s thermal power and hydropower generation portfolio (i.e., excluding solar and wind). WRI conducted physical climate risk assessments under two climate scenarios, Representative Concentration Pathways (RCPs) 4.5 and 8.5, representing potential climate impacts ranging from moderate to the most extreme. We assessed the direct impact on power plants, and measured risks in potential electricity generation losses. Many of the pilot findings are useful not only to EBRD but also to the broader investor community. The lessons learned throughout the pilot also shed light on why and how existing climate-related disclosure guidelines could be improved and what needs to be done for more widespread and faster adoption of comprehensive climate disclosure.

At the portfolio level, EBRD could expect thermal and hydro plants in its portfolio to experience a 7.0 terawatt-hour (TWh) (or 3.3 percent) loss in annual generation by 2030 relative to its baseline level under a moderate climate change scenario. As shown in Figure ES-2, we estimate that, for projects in EBRD’s current power portfolio, physical climate risk–driven annual average generation losses are about 0.76 TWh (or 0.4 percent of total annual generation) for the baseline period. Losses could grow to 7.0 TWh (or 3.3 percent) under RCP4.5, and to 7.4 TWh (or 3.5 percent) under RCP8.5 by 2030.

EBRD’s current hydro portfolio is likely to see a reduction in overall annual generation due to reduced precipitation and increased upstream water consumption, but some hydro plants in its portfolio could expect surpluses in generation. We estimate a 222 gigawatt-hour (GWh) reduction in annual average hydro generation by 2030 under RCP4.5 and a 148 GWh reduction under RCP8.5. The primary reasons for reduced power generation in the future are decreased precipitation and increased water consumption in hydro plants’ upstream watersheds. Rising air temperature also increases evapotranspiration though it can also increase glacier melt and water availability in the short-to-midterm. Some of the hydro plants could expect surpluses in generation due to increased local precipitation.

We estimate that, while both recirculating and dry cooling systems will experience reduced efficiency driven by climate change, once-through cooling systems are by far the most affected today and will continue to be in the future. Cooling technologies also contribute to the resilience of thermal plants to climate change. As Figure ES-3(b) illustrates, a typical once through cooled power plant has a much higher percentage loss compared with plants cooled with recirculating or dry systems, for both the baseline and future periods.

With Patchy Guidance, Companies May Have Climate Risk Blind Spots