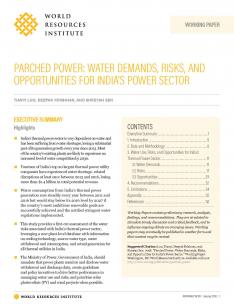 This paper aims to help decision-makers understand the magnitude of water issues for the thermal power sector in India with quantitative evidence. There is a significant data gap in power plant water use in India. The authors used data science techniques and innovative methodologies and developed a comprehensive plant-level geodatabase on water withdrawal and consumption for India’s thermal power sector, making a first-cut attempt to fill the data gap. Combined with information on power generation, water risks, and future projections of energy and water demand, this paper quantifies the Indian thermal power sector’s water demand, assesses its exposure to water stress, and evaluates opportunities for reducing water requirements while supporting power growth for the future.