Building a Case for Clarification 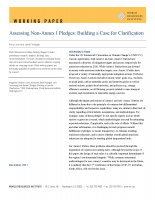 This paper builds a case for the need to clarify the assumptions, methodologies, and other critical details underlying non-Annex I nationally appropriate mitigation actions (NAMAs). It also explains how common accounting rules for Annex I targets will resolve the lack of clarity surrounding targets for developed countries. It concludes with decisions that can be made in COP17 Durban to formalize both common accounting rules for Annex I targets and a clarification process for non–Annex I actions.

Under the UN Framework Convention on Climate Change’s (UNFCCC) Cancun Agreements, both Annex I and non–Annex I Parties have announced a diversity of mitigation targets and actions respectively for emissions reduction by 2020. While Annex I Parties have put forward economy-wide emissions reduction targets, non–Annex I Parties have proposed a variety of nationally appropriate mitigation actions (NAMAs). These non–Annex I actions include economy-wide goals (e.g., business-as-usual goals, carbon neutrality goals, and intensity goals) as well as sectoral actions, project-level activities, and policies (e.g., energy efficiency measures, no-till farming, projects related to mass transport systems, and investments in renewable energy sources).

Although the targets and actions of Annex I and non–Annex I Parties are different in form due to the principle of common-but-differentiated responsibilities and respective capabilities, many are similar in their lack of clarity regarding critical details, assumptions, and methodologies. For example, many of these pledges do not specify aspects such as which sectors or gases are covered, which methodologies are used for estimating expected reductions, if applicable, and/or the role of offsets. Without this and other information, it is challenging to track progress towards fulfillment of pledges, to ensure transparency, to estimate resulting emissions reductions, and to assess whether overall global emissions reductions are adequate for meeting global temperature limits.

For Annex I Parties, these problems should be resolved through the negotiation of common accounting rules. Although beyond the scope of this paper, the design of such rules is a critically important determinant of the regime’s environmental integrity. While common assessment methodologies for non–Annex I countries may be developed in the future, it is unlikely that the 17th Conference of the Parties (COP-17) in Durban, South Africa, will resolve this issue.

There are a number of reasons for this, including the principle of common-but-differentiated responsibilities, the level of complexity of various types of non–Annex I actions, and the lack of experience in this field compared to the common accounting rules developed for Annex I Parties under the Kyoto Protocol from which Annex I Parties can draw. In the absence of a set of provisions similar to those discussed for Annex I, clarification of non–Annex I actions can assist in providing transparency and tracking performance for domestic and international purposes.

While this paper focuses on clarification of non–Annex I actions, we first explain how common accounting rules for Annex I targets resolve the lack of clarity surrounding targets for developed countries. The remainder of the paper is devoted to discussing why and how non–Annex I Parties’ pledges should be clarified. In doing so, we describe the benefits of clarification, as well as the related mandates under the Cancun Agreements. We then outline the specific clarification needs associated with each type of non–Annex I action. It should be noted that this paper focuses only on non–Annex I pledges that are stated in terms of emissions reductions or emissions limitation and not on pledges that are framed in terms of indicators unrelated to emissions (e.g., capacity building initiatives). Lastly, we recommend decisions that can be made in Durban to formalize both common accounting rules for Annex I targets and a clarification process for non–Annex I actions.