Survey and Analysis of Approaches 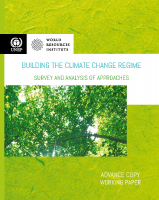 This working paper seeks to identify concrete pathways for building an international "climate change regime." It surveys and analyzes the academic literature as well as proposals by non-governmental organizations (NGOs) and governments.

The purpose of this paper is to help climate change negotiators, other government officials, international institutions, and civil society experts as they jointly work to build the post-2012 international climate regime. The climate regime is defined here as the set of international, national and sub-national institutions and actors involved in addressing climate change. The paper seeks to identify concrete pathways for building a regime capable of delivering a level of action consistent with the objective of the Convention. It does so by surveying and analyzing the academic literature as well as proposals by non-governmental organizations (NGOs) and governments. The authors group proposals according to the key issue they tackle in the design of the regime and the “approach” they take. The five key issues discussed are:

It is important to note that all approaches are meant to be complementary rather than mutually exclusive. While the paper does not make recommendations about which approach to adopt, it assesses each approach against three criteria: adequacy, equity, and implementation.

Monitoring the Receipt of International Climate Finance by Developing Countries