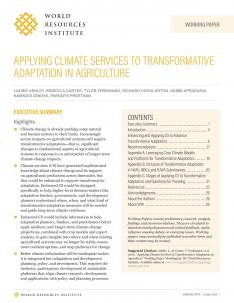 As climate change increasingly affects agriculture around the world, reliable, timely, and targeted information about weather and climate conditions is becoming an ever more urgent requirement for adaptation decision-making.

This paper considers how transformative adaptation – long-term, systemic change to fundamental aspects of systems in response to or anticipation of severe climate change impacts - could be accelerated by enhancing climate services and how they are applied.

The paper explores how components of climate services – defined as systems to develop and provide climate information to meet users’ needs - could be enhanced for building and implementing transformative pathways. It looks at current challenges and opportunities in climate service design and suggests how different types of information and data can be used to better integrate climate services into adaptation and development plans for systemic change. The paper concludes by providing recommendations for researchers, policymakers, and adaptation funding entities.

As per Carter et al. (2018), this paper defines transformative adaptation for agriculture as intentional alterations that are so significant that they change fundamental aspects of agricultural production systems in response to or in anticipation of climate impacts. Such alterations are generally at broad scale and often include one or more of the following attributes:

Transformative approaches offer the potential to reduce crisis and conflict, avoid maladaptation, and ensure that adaptation investments made today will prove strategic further into the future (Carter et al. 2018). This paper explores how CS—systems for developing and providing climate information to meet users’ needs (WMO 2018)— could be enhanced and applied to advance transformative adaptation in agriculture where and when it is needed.