Indonesia’s Ministry of Environment and Forestry took a step forward on the road to Paris when it published a draft of its new climate plan, or Intended Nationally Determined Contribution (INDC), for public consultation on September 1, 2015. As the world’s sixth-largest emitter of greenhouse gases, Indonesia’s climate commitment is an important piece of the global response to climate change.

The draft INDC builds on Indonesia’s 2009 commitment to reduce emissions 26 percent relative to a business-as-usual (BAU) scenario by 2020, as well as its significant efforts to stem deforestation, by calling for an unconditional 29 percent emissions reduction by 2030 and a conditional reduction of 41 percent with international assistance and cooperation.

Over the past several months, Indonesia has analyzed its emissions-mitigation opportunities. As a result of these efforts, the draft INDC includes a quantitative, post-2020 mitigation target, as well as general information on how it will approach mitigation in the land use, energy, and waste sectors; its planning processes; and its resilience strategy.

Nevertheless, the current draft contribution still displays several important gaps in transparency and ambition, which must be addressed before submitting a final INDC to the United Nations Framework Convention on Climate Change (UNFCCC). By eliminating these gaps, the Indonesian government could bring its contribution into line with international best practices on transparency, demonstrate leadership internationally by enhancing ambition, and help ensure success at COP 21.

Here are our top recommendations for Indonesia’s final INDC:

1) Enhance the ambition of unconditional emissions reduction target beyond 29 percent by 2030.

Without further details on modeling undertaken by the Indonesian government, a full ambition assessment of its 29 percent target is impossible. However, Indonesia’s Planning Ministry (BAPPENAS) has analyzed scenarios for achieving a 29 percent reduction and for achieving—under an “optimistic” scenario—a somewhat larger (though unspecified) reduction (see graphic below). The assumed policy actions under both scenarios are similar; much of the difference stems from assumptions regarding the effectiveness of these measures.

The more optimistic scenario should also be reflected in Indonesia’s commitment, and could be included as part of a range together with the “fair” scenario. A number of other countries, including China and the United States, have included ranges in their INDC commitments. 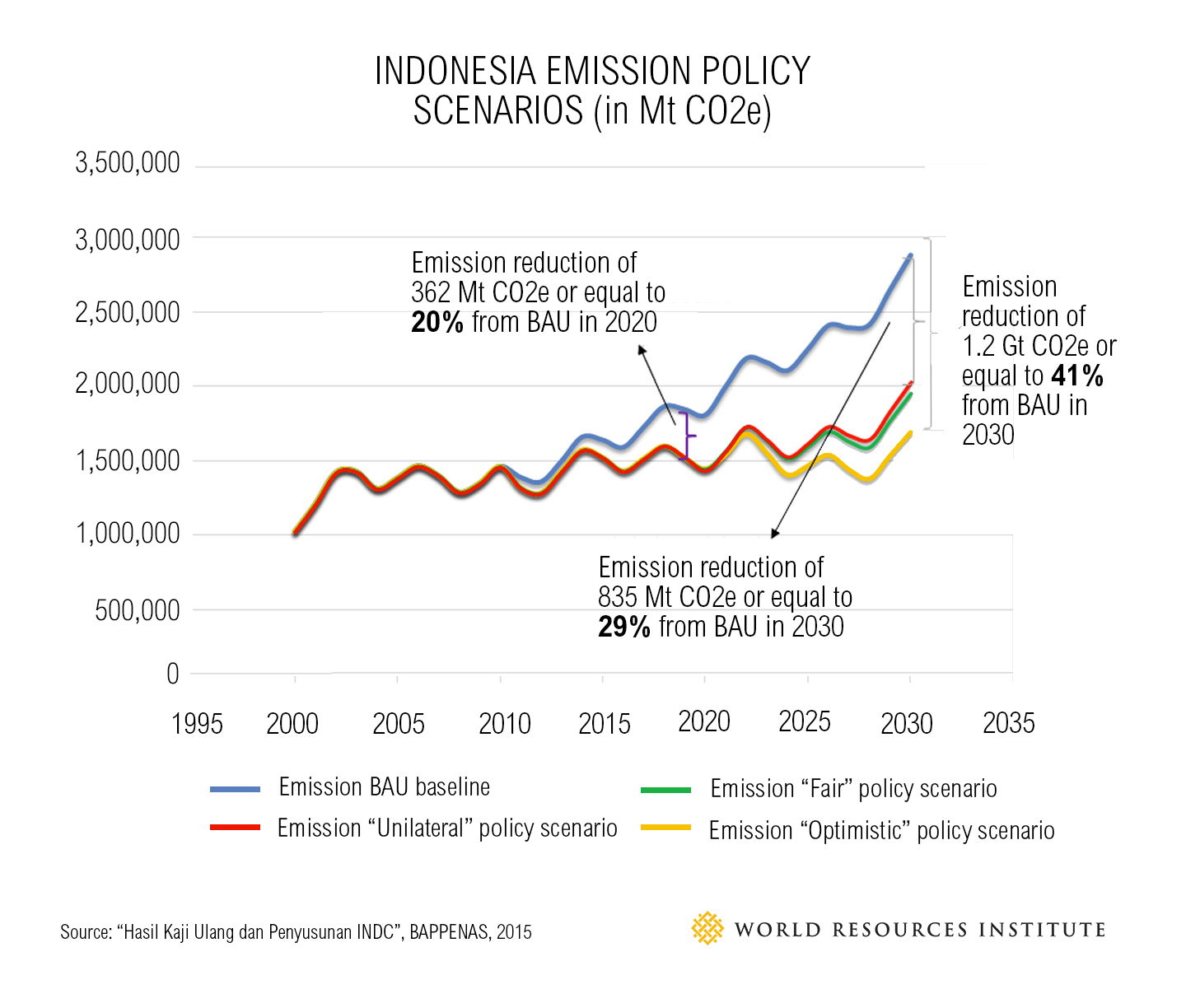 2) Clarify emission-reduction targets by publishing the BAU scenario against that which emissions will be reduced.

Defining the baseline level of emissions against which Indonesia’s reductions will be achieved (i.e., emissions associated with the BAU scenario) is imperative for transparency and accountability. Absent this information, tracking progress towards INDC goals is impossible for Indonesia, and uncertainty regarding future global emissions – as well as associated temperature change – is compounded.

Because Indonesia establishes a target relative to the BAU scenario without published BAU scenario emissions, the draft INDC is out of step with most of the 11 INDCs submitted by other countries with emissions-reduction goals relative to BAU. Of these, eight countries have quantified their BAU, including fellow major emerging economies Mexico and South Korea, as well as Andorra, Democratic Republic of the Congo, Djibouti, Kenya, Macedonia and Morocco. The only three countries not to quantify their BAU are very small developing countries: Benin, Gabon, and Trinidad and Tobago.

While the Indonesian government has analyzed its BAU scenario in considerable detail, it has unfortunately not published this information in the draft INDC. Indonesia can correct this omission by publishing 2030 BAU emissions in the final INDC.

The mitigation section of Indonesia’s draft INDC mentions 12.7 million hectares (31.4 million acres) of forest area designated for social forestry, ecosystem restoration, and conservation and sustainable use. While the specific mitigation impacts of this commitment are unclear, restoration on this scale could result in significant emissions reductions if implemented with a view towards maximizing mitigation potential – nearly 55 percent of Indonesia’s emissions come from deforestation, forest degradation and peatland destruction.

Indonesia could ensure its goal maximizes mitigation benefits by including an ambitious and quantitative carbon stock target in its INDC, and/or including a qualitative commitment to prioritize restoration of degraded lands, which would maximize carbon sequestration.

In addition to these key improvements, Indonesia should also ensure its final INDC follows the full suite of international best practices on transparency, including:

Indonesia plays an important role in the COP 21 process. Beyond being one of the largest global emitters and one of the world’s fastest-growing economies, it can be a model for other developing nations to follow. With a few improvements, Indonesia can submit a robust and actionable INDC in the lead-up to negotiations in Paris later this year.

Climate Plans in the Lead-up to Paris: Where Do We Stand?