How to Calculate Policies’ Effects on Greenhouse Gas Emissions

Tunisia launched its renewable energy program, PROSOL ELEC, in 2010 to scale up solar photovoltaic systems in buildings throughout the country. The National Agency for Energy Conversation (ANME) anticipated that the greater use of solar power would help curb climate change, but experts didn’t quantify just how much the program would reduce the country’s greenhouse gas emissions.

So they used a new tool—the Greenhouse Gas (GHG) Protocol’s Policy and Action Standard—to find out. Experts from ANME began by identifying the emissions impacts of the PROSOL program, including reduced emissions from conventional power plants, reduced emissions from natural gas systems, and increased emissions from production of PV systems imported from other countries. Then, using the standard, they figured out just how much of an impact PROSOL would make in reducing Tunisia’s emissions. Overall, the program is expected to reduce emissions by 4 million tonnes between 2014 and 2030.

Today, WRI is releasing the Policy and Action Standard to the wider world. The first-of-its-kind standard is designed to help countries and local governments better design, track, and evaluate policies and actions. Because no other international guidelines exist, the standard will create more international consistency and transparency in the way emissions assessments of policies and actions are carried out. In short, it can help countries, cities, and others implement more effective emissions-reduction initiatives throughout the world. 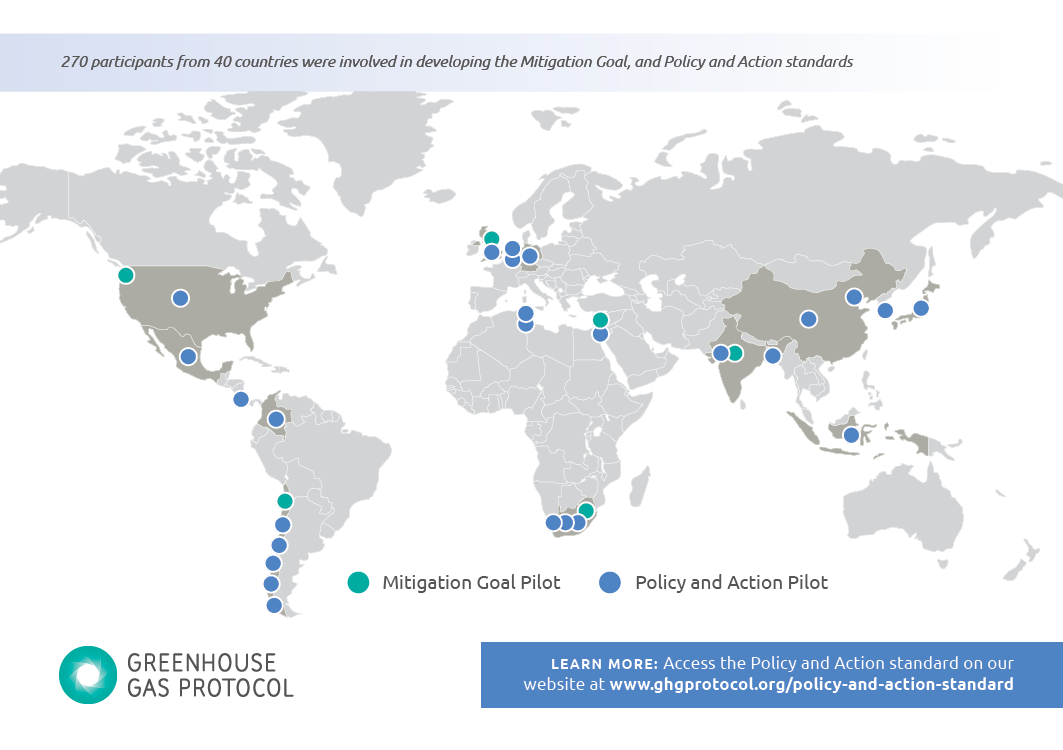 The standard can be used in many situations. It provides general guidance relevant to all types of policies and actions in any sector, including regulations and standards, taxes and subsides, emissions trading programs, voluntary agreements, financing and investment, and more. And it can be used by national or subnational governments, donor agencies and financial institutions, NGOs, and researchers to inform policy design and decide where to invest resources, improve policy effectiveness in reducing emissions, and attract financial support for climate action.

Steps to using the standard

The basic steps to using the Policy and Action Standard are:

The standard is being launched along with the Mitigation Goal Standard, an accounting and reporting standard for assessing progress toward national and subnational emissions-reduction goals.

In all, 270 participants from 40 countries were involved in developing both standards. As part of the process, pilot tests were conducted on 27 policies and actions in 20 countries and cities to make sure the standard works in practice. In addition to Tunisia’s solar program, other pilots included:

Putting the Standard into Action

To help implement the standard, the GHG Protocol website also provides a list of relevant calculation tools that may be used, as well as sector-specific guidance with further detail for the agriculture, forestry and other land use (AFOLU), energy supply, residential and commercial buildings, transportation, and waste sectors.

Download the standard and related tools and guidance, here.