10 Breakthrough Technologies Can Help Feed the World Without Destroying It

How can the world feed nearly 10 billion people by 2050 while also advancing economic development, protecting and restoring forests, and stabilizing the climate?

It won’t be easy and will require major new efforts, but it can be done. Our new World Resources Report: Creating a Sustainable Food Future, co-issued by the World Bank, UN Environment Programme and UN Development Programme, recommends a menu of 22 solutions served over five courses:

This menu enables the world to close the gap between the food available today and that needed by 2050, without clearing more land for farming and while reducing the food system’s greenhouse gas emissions to a level aligned with the Paris Agreement on climate change. 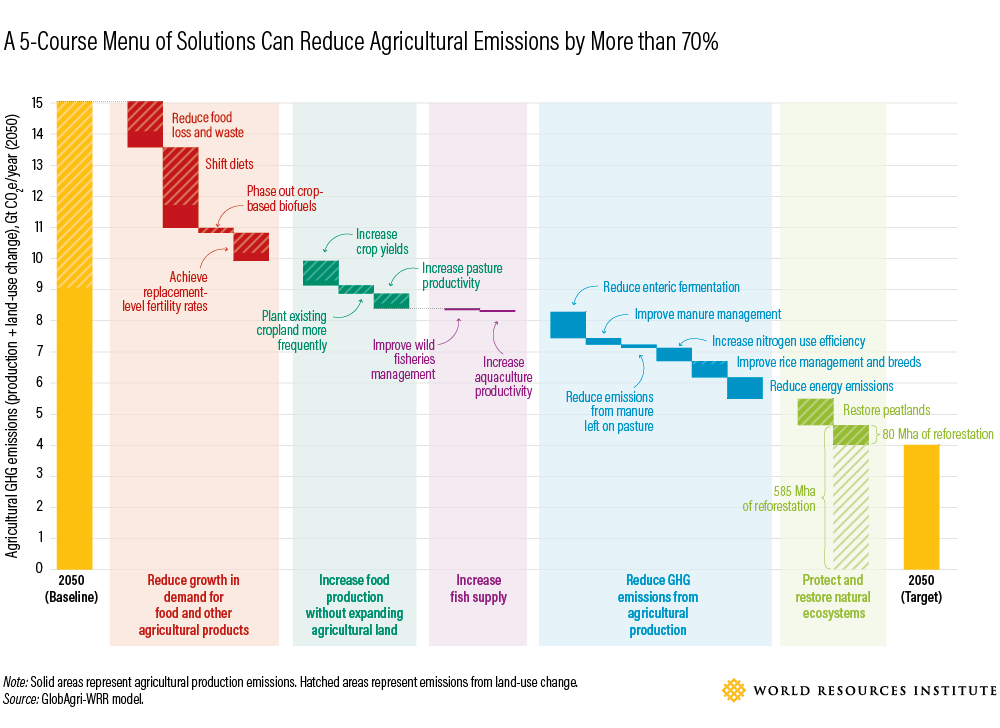 Some items in the menu require more farmers to implement best practices that already exist today. Others need consumers to change behavior, or governments and businesses to reform policies.

The challenge is sufficiently large, however, that many solutions will require technological innovations. Advancing them is a major theme of our report. Here are 10 important examples:

Globally, per gram of edible protein, beef and lamb use around 20 times the land and generate around 20 times the greenhouse gas emissions of plant-based proteins. Affordable plant-based products that mimic the experience of eating beef could reduce growth in global beef consumption, while still satisfying meat-lovers. Fortunately, companies such as Impossible Foods and Beyond Meat are already making headlines by creating plant-based “beef” that looks, sizzles, tastes and even bleeds like the real thing.

About one-third of food is lost or wasted between the farm and the fork. Fruits and vegetables are a common food item wasted in more developed markets. One breakthrough to address this is the emergence of inexpensive methods that slow the ripening of produce. Companies are already investigating a variety of natural compounds to do so. For example, Apeel Sciences has an array of extremely thin spray-on films that inhibit bacterial growth and retain water in fruit. Others include Nanology and Bluapple, whose technologies delay decomposition.

About a third of all greenhouse gas emissions from agricultural production (excluding land-use change) come from “enteric” methane released as cow burps. Several research groups and companies are working on feed compounds that suppress the formation of methane in cows’ stomachs. Dutch-based DSM has a product called 3-NOP that reduces these methane emissions by 30% in tests, and does not appear to have health or environmental side effects.

4) Compounds to keep nitrogen in the soil

About 20% of greenhouse gas emissions from agricultural production are related to nitrogen from fertilizer and manure on crops and pastures. The majority of these emissions come from the formation of nitrous oxide as microorganisms transfer nitrogen from one chemical form to another. Compounds that prevent these changes, including coatings on fertilizers and so-called “nitrification inhibitors,” can reduce nitrogen losses and increase the amount of nitrogen taken up by plants, leading to lower greenhouse gas emissions and less water pollution from fertilizer runoff. Without a regulatory push, research into such technologies has stagnated, but great potential remains. Some new compounds have emerged in just the past year.

Around 15% of greenhouse gas emissions from agricultural production come from methane-producing microorganisms in rice paddies. Researchers have identified some common rice varieties that emit less methane than others, and they’ve bred one experimental strain that reduces methane emissions by 30% in the laboratory. Despite this promise, there is no consistent effort in any country to breed and encourage the uptake of low-methane rice varieties.

Two broad items on the menu for a sustainable food future involve boosting yields on existing cropland and producing more milk and meat on existing grazing land. One way to boost crop yields sustainably (without over-application of fertilizers or over-extraction of irrigation water) is to unlock traits in crop genes that increase yields. CRISPR technology, which enables more precise turning on and off of genes, has the potential to be revolutionary in this regard.

Dramatic growth in demand for palm oil, an ingredient found in everything from shampoo to cookies, has been driving deforestation in Southeast Asia for decades, and now threatens forests in Africa and Latin America. One way to reduce this threat is to breed and plant oil palm trees with 2-4 times the production per hectare of conventional trees. Potential for higher-yielding oil palm trees already exists. The company PT Smart, for instance, has a variety with triple the current average yield of Indonesia’s oil palm trees. These high-yield varieties need to be used in new plantations and when farmers restock current plantations with new trees (typically done every 20 or more years).

Another element of a sustainable food future is to reduce pressure on wild fish stocks. As the global fish catch has peaked, fish farming, or “aquaculture,” has grown to meet world fish demand. However, aquaculture can increase pressure on the small wild fish species used as feed ingredients for larger farmed fish. One technological innovation to circumvent this challenge is to create substitute feeds using algae or oilseeds that contain the omega-3 fatty acids found in wild fish-based oils. Some companies are moving to produce algae-based aquaculture feeds, and researchers have created a variety of canola that contains omega-3s.

The production of nitrogen-based fertilizers uses vast quantities of fossil fuels and generates significant emissions, roughly 85% of which result from the production of hydrogen to blend with nitrogen. Many have invested in solar energy to produce hydrogen for fuel-cell vehicles, but similar technologies can also help produce low-carbon fertilizers. Pilot plants are under construction in Australia.

Despite their potential, none of these measures are moving forward at adequate speed and scale. Research funding for agricultural greenhouse gas mitigation is miniscule and needs to be increased, in part by making better use of the $600 billion in existing public support each year for agriculture globally.

In addition, although many of the technologies above have the potential to save money even in the near-term, many cost more than their conventional counterparts today. Increasing their uptake will require not only more public research funds, but also flexible regulations that give private companies stronger incentives to innovate. For example, in areas where technologies are underdeveloped, such as compounds that reduce enteric methane, governments could commit to requiring the use of these compounds if a product achieves a certain level of cost-effectiveness in mitigation (such as $25 per ton of carbon dioxide equivalent). As another example, governments could require fertilizer companies to increasingly blend in compounds that reduce nitrogen loss.

The good news is that for virtually every type of advancement needed in the food system, small groups of scientists with limited budgets have already identified promising opportunities. Today’s plant-based burgers that taste like real beef were developed and brought to market in fewer than 10 years.

Feeding a growing world population in the face of climate change and resource constraints is an enormous challenge. The technological innovations listed above aren’t the only ones the food system needs, and of course we won’t solve the challenge through technology alone. However, just as in other sectors like energy and transport, technological innovation is an essential ingredient of a sustainable future.