EDITOR'S NOTE 02/28/2018: The new Climate Watch platform is now available, allowing you to explore historical and projected emissions, countries' climate targets and their linkages with the Sustainable Development Goals.

As the 2006 UN Conference of the Parties to the Climate Convention (COP-12) approaches, an overview of greenhouse gas sources is helpful. GHGs indeed come from almost every human activity. This figure is a comprehensive break-down of major sectors, activities and major greenhouse gases at the global level. At WRI, we affectionately call it the "spaghetti chart." The chart was recently included in the Stern Review on the Economics of Climate Change (See also "Global warming, economic cooling?" from Economist.com.)

U.S. version of this chart 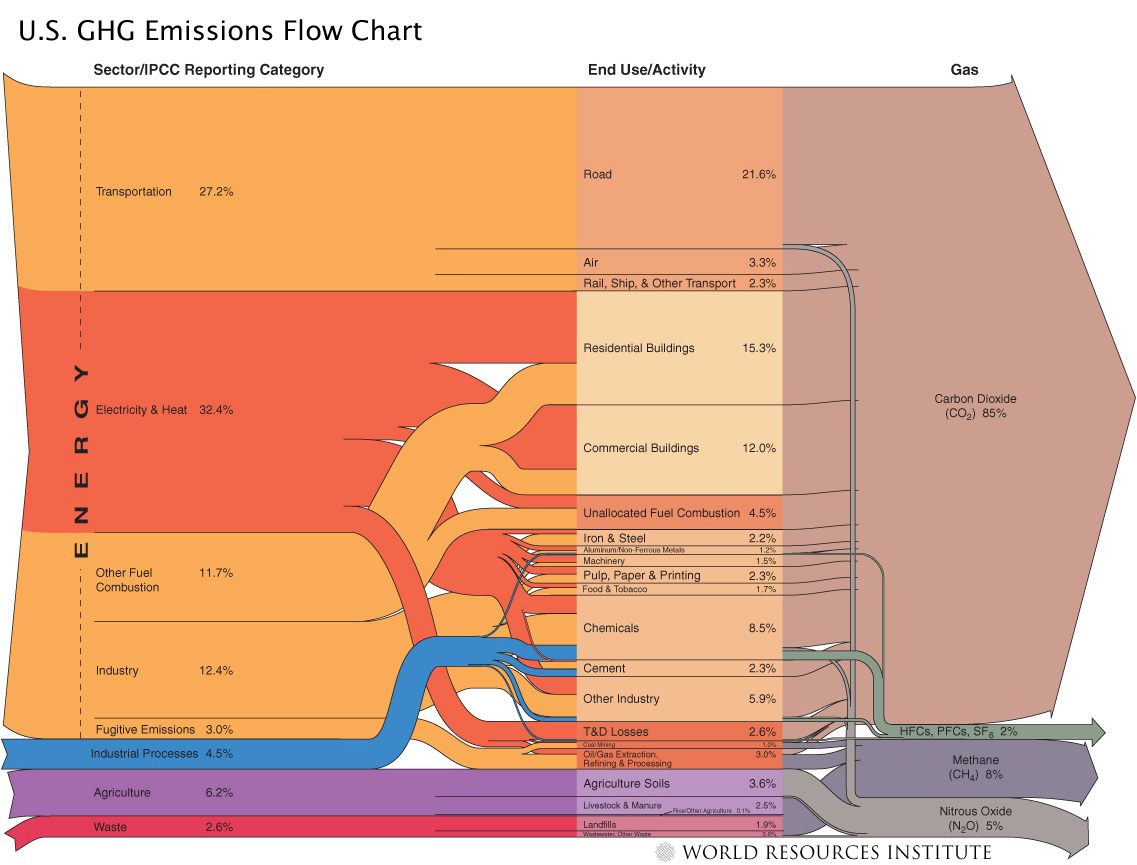 Energy consumption is the major contributor of GHGs (61%). Within energy consumption, 40% is electricity and heat generation, another 20% is transportation and the remainder is building heat and industry.

The major greenhouse gas is of course carbon dioxide (CO2) and nearly all CO2 comes from fossil fuels and land-use change. But methane (CH4) and nitrous oxide (N2O), which mostly come from agriculture and waste, are also significant GHGs and shouldn't be discounted.

This diagram shows GHGs at the global level. But the mix of GHGs is much different in developed and developing countries. In developing countries, land-use change and agriculture contribute much greater shares of emissions than those shown here. In industrialized countries agriculture is usually a much smaller share—6% in the United States for example—and land-use change is often a sink.

Sources & Notes: All data is for 2000. All calculations are based on CO2 equivalents, using 100-year global warming potentials from the IPCC (1996), based on a total global estimate of 41,755 MtCO2 equivalent. Land use change includes both emissions and absorptions. See Appendix 2 in Navigating the Numbers for a cmoplete description of sector and end use/activity definitions, as well as data sources. Dotted lines represent flows of less than 0.1% percent of total GHG emissions.