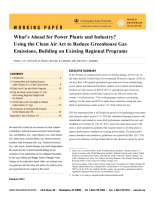 This working paper explores how states and the U.S. Environmental Protection Agency (EPA) could reduce greenhouse gas emissions from power plants and industrial facilities using the standards of performance under section 111 of the Clean Air Act.

This working paper examines the process for establishing performance standards covering existing power plants and industrial facilities in the United States and finds:

In the absence of congressional action on climate change, all eyes are on the states and the United States Environmental Protection Agency (EPA) to see how they will regulate greenhouse gas emissions from existing large power plants and industrial facilities. Indeed, power plants and industrial facilities are the sources of half of all U.S. greenhouse gas emissions, making those plants and facilities central to any effort to reduce the country’s total emissions. This working paper explores a promising pathway for the states and EPA to make these reductions using the standards of performance under section 111 of the Clean Air Act.

EPA has announced that it will begin the process for regulating power plants and refineries under section 111. EPA has scheduled listening sessions with stakeholders and intends to issue draft performance standards for new and modified power plants by July 26, 2011, and at the same time issue to the states a draft mandatory guideline that requires states to develop plans to impose performance standards on existing power plants. The final performance standards and mandatory guidelines are expected in May 2012. The process for refineries will lag behind that for the electricity sector by about six months, with draft rules to be issued in December 2011 and final rules expected in November 2012.

The traditional approach to regulating power plant and industrial facilities is through performance standards that prescribe specific emissions limitations on individual sources. This approach has been used for years to control conventional pollutant emissions, and is the safest approach from a legal defensibility standpoint. Because many states have already begun regulating some existing sources using cap and trade, the traditional approach may not be the one preferred by the states or their stakeholders. Indeed, states that have already chosen to reduce emissions from power plants and industry using flexible, marketbased approaches, can be expected to develop plans calling for alternatives to the traditional source-specific performance standards. EPA under George W. Bush concluded that the Clean Air Act allows cap and trade as a demonstrated and effective form of regulation under Section 111(d), and the Obama EPA has not contested this interpretation. Until federal courts rule on this approach, however, there will be some uncertainty about its viability.

The assumption that the states and many of their stakeholders will propose cap and trade under section 111(d) of the Clean Air Act has led to a number of questions around program design features, such as whether the Act allows offsets, or trading across listed categories of sources and whether the existing regional cap-and-trade program designs would be acceptable to EPA under section 111(d). Even though many of these issues are questions of first impression and therefore cannot be answered with absolute certainty, this paper explores the arguments for and against specific cap-and-trade design features in the context of section 111, including the implications for existing and planned regional cap-and-trade programs.