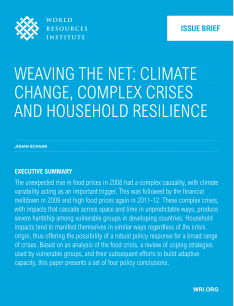 Complex crises produce impacts that cascade across space and time in unpredictable ways, and create severe hardship among vulnerable groups in developing countries. This paper uses the food crisis of 2008 as a basis for exploring the impacts on households and their efforts to build adaptive capacity. A main finding is that household-level impacts tend to manifest in similar ways, regardless of the origin of the crisis.

The unexpected rise in food prices in 2008 had a complex causality, with climate variability acting as an important trigger. This was followed by the financial meltdown in 2009 and high food prices again in 2011-12. These complex crises, with impacts that cascade across space and time in unpredictable ways, produce severe hardship among vulnerable groups in developing countries.

Household impacts tend to manifest themselves in similar ways regardless of the crisis origin, thus offering the possibility of a robust policy response for a broad range of crises. Based on an analysis of the food crisis, a review of coping strategies used by vulnerable groups, and their subsequent efforts to build adaptive capacity, this paper presents a set of four policy conclusions.