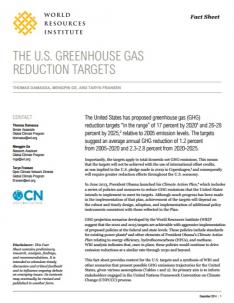 This fact sheet provides context for the U.S. GHG reduction targets and a synthesis of WRI and other scenarios that present possible GHG emissions trajectories for the U.S., given various assumptions.

Its primary aim is to inform stakeholders engaged in the UN Framework Convention on Climate Change (UNFCCC) process.

In June 2013, President Obama launched his Climate Action Plan, which includes a series of policies and measures to reduce GHG emissions that the United States intends to implement to meet its targets. Although much progress has been made in the implementation of that plan, achievement of the targets will depend on the robust and timely design, adoption, and implementation of additional policy instruments consistent with those reflected in the Plan.

GHG projection scenarios developed by the World Resources Institute (WRI) suggest that the 2020 and 2025 targets are achievable with aggressive implementation of proposed policies at the federal and state levels. These policies include standards for existing power plants and other elements of President Obama’s Climate Action Plan relating to energy efficiency, hydrofluorocarbons (HFCs), and methane. WRI analysis indicates that, once in place, these policies would continue to drive emission reductions at a similar rate through 2030 and beyond. However, GHG scenarios suggest it will take significant additional actions over the coming years if the United States is to achieve a long-term trajectory consistent with 2oC.