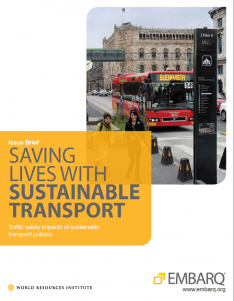 Traffic safety improvements are an often-overlooked benefit of sustainable transport projects and policies. New research from EMBARQ finds that investments in biking and pedestrian infrastructure, improved mass transit systems, and measures to limit motor vehicle usage can all significantly improve traffic safety, reducing traffic crashes and saving lives. The issue brief also contains recommendations for integrating safety into transport planning and policy, with a focus on the context of cities in the developing world.

This issue brief reviews evidence of the safety benefits of sustainable transport, with a particular focus on the applicability of these findings to cities in developing countries. Where the information is available, we also provide estimates of the magnitude of safety benefits that have been recorded for specific projects.

We consider the relationship between traffic volume and safety and present evidence that traffic volumes (measured as vehicle kilometers traveled, or VKT) are a strong predictor of accidents. Drawing on experiences in Europe, Latin America, and India, we show that cities that have restricted car traffic and promoted mass transit have realized measurable safety benefits. In London and Stockholm, charges levied on vehicles traveling through congested city centers reduced traffic volumes and were associated with a drop in accidents causing injuries. In Bogotá, Guadalajara, and Ahmedabad, bus rapid transit (BRT) systems have improved safety on the streets on which they run.

Similarly, cities that have invested in infrastructure for cyclists and pedestrians, such as Copenhagen, Minneapolis, and New York City, have reported safety improvements for these vulnerable road users. The evidence in New York City and Copenhagen suggests that these benefits extend to other road users as well.

To be sure, the safety benefits of sustainable transport—both motorized and non-motorized— should be weighed in light of the many other factors that determine road safety. Policies targeting only traffic volumes, for example, do not address hazards related to poor infrastructure design. Similarly, transit service without high-quality infrastructure and safety oversight will not bring any safety benefits. And one should also not overlook that even in the most bike-friendly cities, cyclists remain more vulnerable than motor vehicle occupants. Nevertheless, the evidence presented in this brief shows that well-planned and designed sustainable transport projects and policies can play a significant role in improving road safety.

After setting out the evidence linking sustainable transport and road safety, we draw implications for better integrating safety into transportation planning and policy. We focus specifically on policy implications for cities in the developing world, which are currently dealing with high traffic-fatality rates and increasing motorization.

We conclude by noting areas for future research, including the safety impacts of other transport modes (such as auto-rickshaws) and transit-oriented development policies. Finally, we recognize the need to develop estimates of the expected safety impacts of different types of transit systems so that policymakers can better integrate the safety benefits of transit into cost-benefit analyses for funding decisions.