Lessons from Peru in the Governance of Gas Production Revenues 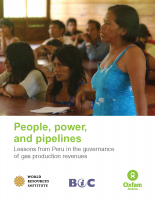 This report draws on lessons from recent experiences in Peru to suggest ways to help subnational governments manage extractive industry risks and revenues.

They also provide insights into SNG mechanisms for transparency and public accountability, as well as into local citizen awareness of Camisea revenue transfers.

The study produced a number of findings related to the management of gas production revenues from the Camisea project in Peru:

For poor countries with abundant natural resources, extractive industries offer the potential of generating enormous revenues. These revenues can fuel economic growth and be directed to combat poverty and improve the well-being of local communities. Experience has shown, however, that large-scale mining and oil and gas prospecting and extraction carry serious environmental and social risks for host countries, with many of the impacts borne by local communities. Host countries also face the risk of the “resource curse,” where poor management of the revenues generated from extractive industries slows economic growth, increases economic volatility and corruption, and sometimes leads to conflict, rather than creating prosperity.

Developing countries that are advancing their extractive industries sectors face the challenges of managing and mitigating the associated risks of development, while ensuring that the economic benefits are channeled to alleviate poverty. Many of these countries are taking measures to address these risks with help from public international financial institutions (IFIs), such as the World Bank and the Inter-American Development Bank (IDB).1 In this context, these institutions can play an important role by offering support for public-sector reforms to improve the transparency and accountability of extractive sectors at the national level.

Where fiscal decentralization schemes are in place, subnational governments (SNGs) assume a particularly vital role in managing extractive industry revenues. IFIs can help build the capacity, transparency, and accountability of SNGs, so SNGs can manage extractive industry revenues in a manner that provides long-term benefits to local communities. In many countries, IFIs also lend money to governments and the private sector in direct support of extractive projects, which enables them to use their influence as lenders and investors to empower government agencies to promote revenue-distribution schemes that benefit local community areas affected by projects.

This report suggests ways in which IFIs can improve their role in the extractives sector by giving greater support to SNGs in managing extractive industry risks and revenues and by drawing lessons from recent experiences in Peru. For IFI-supported initiatives in the extractive industries to be successful in reducing poverty and improving well-being, the initiatives must be linked to and preceded by support for programs to increase government capacity to regulate activities with high social and environmental risks and to manage revenue flows at both the national and subnational levels. Without this support, government agencies may find themselves unable to manage a myriad of challenges at each stage in the development of large-scale projects. The 2004 Extractive Industries Review (EIR),2 an independent review of the World Bank’s extractive industry lending, concluded that for the World Bank’s interventions to lead to sustainable development, governance systems must be strengthened before investments in extractive industries sector are made. The EIR spurred a number of initiatives to strengthen the quality of governance by increasing the transparency of private and public extractive industry revenue flows at the national level (see Box 1). Nevertheless, more attention is needed— particularly from the IFIs—on building the capacity of SNGs to manage these flows and to ensure that revenues are invested in the well-being of local communities.

Peru—which is highly dependent on income from extractive industries revenue—has been undergoing an aggressive process of political and fiscal decentralization and introduced policies to increase the transparency of its subnational revenue flows. As a result, SNGs3 in Peru must play a crucial role in managing the risks associated with extractive industries within their jurisdictions, while also ensuring that the revenues generated by the sector support local development that alleviates poverty and improves the well-being of local communities.

IFIs have supported the process of political and economic decentralization in Peru and have also invested in the extractive industries sector. They have provided technical and financial support to public-sector agencies, including support for public revenue management systems. IFIs also directly finance a number of extractive industries projects. The decentralization reforms and the expansion of extractive industries projects have increased the volume of funds being transferred to rural areas. However, official figures show that while national poverty rates declined steadily between 2005 and 2008 in Peru, as of 2008 close to 60 percent of the rural population remained in poverty.4 Given the important role IFIs have played in shaping this sector in Peru, they are well positioned to diagnose why poverty persists in the context of such wealth and to determine the role that IFIs, Peru’s national government, and SNGs each should play to address this challenge.

To inform such a diagnosis, this report examines Peru’s Camisea natural gas project and draws lessons from the challenges faced by SNGs in managing the revenues from that project. Between 2004 and 2009, the Camisea project generated approximately $1.13 billion5 in public revenues for SNGs, which the Peruvian national government distributed through mechanisms called “the gas Canon” and the Camisea Fund for Socioeconomic Development (FOCAM). The Peruvian national government uses gas and mining Canons (transfers of natural-resource-based revenues) to distribute half the revenue it collects from extractive industries to SNGs. The government created the FOCAM inter-governmental transfer to allow all regions impacted by the Camisea project—not just those containing physical gas reserves—to receive compensation.

The Camisea project—the largest producer of hydrocarbons in Peru— benefited from both public and private financing. The public banks that provided financing included the IDB, the Andean Development Corporation, Brazilian National Development Bank, and Peru’s Banco de Crédito. A second phase of the project, the Peru Liquefied Natural Gas Project (Peru LNG, also known as Camisea II) supports the export of natural gas from the Camisea fields through a new pipeline to a natural gas liquefaction plant on the Pacific coast. This $3.9 billion project, due for completion in 2010, received financing from a consortium of lenders, including the IDB, International Finance Corporation (IFC), Export-Import Bank of the United States, Export-Import Bank of Korea, and SACE S.p.A. of Italy.

To put the Camisea project into context, the report describes Peru’s turbulent history with extractive industries development as well as the recent decentralization process that has devolved revenue management authority to subnational governments. The report also examines the risks and governance challenges posed by the project and the mechanisms by which its revenues are distributed to subnational governments. Finally, the report analyzes SNG management of Camisea revenues generated between 2005 and 2007.

The report finds that planning failures by both the Peruvian national government and IFIs undermined governance by not building greater SNG capacity before massive extractives revenue transfers began to flow in 2006. The fragile SNG capacity places in question the long-term development impact of Camisea wealth.

IFIs have played an important role in catalyzing and providing investment in oil and mining projects, and thus they share with the Peruvian government the responsibility to ensure that the financial benefits of extractive industries projects are directed towards poverty alleviation and sustainable development. By highlighting the challenges of promoting good governance at the subnational level in the context of dramatic increases in revenue transfers in a region with limited strategic planning capacity, this report informs the design of future IFI investments in similar contexts.

Our analysis suggests a number of actions by IFIs to address the findings documented in this report:

A Seat at the Table