Weak Governance and the Gulf Oil Spill, a 30-Year Timeline 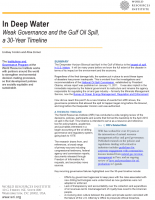 This timeline provides a wide-ranging review of the decisions, policies, participants and events that formed the backdrop to the April 2010 oil spill in the Gulf of Mexico. This timeline is intended to serve as a resource and reference tool for policymakers, academics and journalists interested in a larger accounting of the oil drilling governance and regulatory system, going back to 1978.

The timeline is accompanied by thematic icons to highlight specific streams of influence and decision-making areas that contributed to the complex system failure.

This timeline seeks to shed light on the circumstances, policies and decisions that helped enable America’s worst oil spill. It does not provide recommendations, but rather highlights key governance issues that need to be addressed if the U.S. is to avoid another such disaster. The National Oil Spill Commission Report, released early January 2011, clearly states the extent of governance reform required:

To assure human safety and environmental protection, regulatory oversight of leasing, energy exploration, and production require reforms even beyond those significant reforms already initiated since the Deepwater Horizon disaster. Fundamental reform will be needed in both the structure of those in charge of regulatory oversight and their internal decision-making process to ensure their political autonomy, technical expertise, and their full consideration of environmental protection concerns.

The report goes on to make detailed recommendations ranging from technical standards to auditing and permitting requirements. These recommendations will take time and resources to integrate and, as the new 112th Congress settles into office, proposed budget cuts and calls for regulatory reform may pose a challenge. It is therefore critical that non-governmental organizations play an active role in ensuring that environmental resources are managed safely and fairly and that the lessons of the last 30 years regarding U.S. deepwater oil extraction are learned and acted upon.

The Deepwater Horizon Blowout last April in the Gulf of Mexico is the largest oil spill in U.S. history. It will be many years before we know the full extent of the disaster in terms of its impact on the environment and the economy.

Regardless of the final damage tally, the system put in place to avoid these types of disasters has proven inadequate. This is evident from the investigations and recommendations of the National Oil Spill Commission, established by President Obama, whose report was published on January 11, 2011. It was also implicit in the immediate response by the federal government to restructure and rename the agency responsible for regulating the oil and gas industry – formerly the Minerals Management Service, now the Bureau of Ocean Energy Management, Regulation and Enforcement.

How did we reach this point? As a new timeline of events from WRI shows, the governance problems that allowed the spill to happen began long before the blowout, and long before the Deepwater Horizon well was authorized.

The World Resources Institute (WRI) has conducted a wide-ranging review of the decisions, policies, participants and events that formed the backdrop to the April 2010 oil spill in the Gulf. This timeline is intended to serve as a resource and reference tool for policymakers, academics and journalists interested in a larger accounting of the oil drilling governance and regulatory system, going back to 1978. The research draws from, and references, a broad range of primary sources including congressional testimony, federal agency and commission reports, documents released through Freedom of Information Act requests, and secondary news sources.

Key recurring governance failures highlighted over the 30-year timeline include: