Opportunities for Crop Research, Development and Adoption to Drive Transformative Adaptation in Agriculture 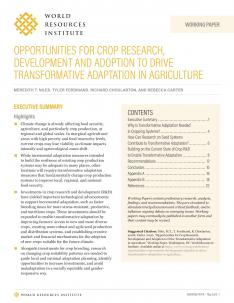 Climate change is already affecting crop production, and in some cases is undermining the viability of current crop systems.

Crop research and development plays a critical role in developing the technologies and practices farmers need to maximize productivity and manage the increasing risks they face. This paper investigates how transformative adaptation - long-term, systemic change to fundamental aspects of systems in response to or anticipation of severe climate change impacts – can be sped up and scaled through crop research and development.

The paper explains why transformative adaptation is needed in cropping systems, how seeds systems play a key role in these systemic shifts, and what changes are needed in crop research and development to enable climate-resilient transformations. The paper concludes by providing recommendations for researchers, policymakers, and adaptation funding entities.

Increasing frequency of extreme events, shifting temperature and rainfall patterns, and higher incidence of pests and diseases have negatively affected crop yields in many locations. Intensifying climate impacts are projected to exacerbate these issues, threatening the agronomic and commercial viability of various crops in different parts of the world. Where the viability of current cropping systems is threatened by climate change, transformative adaptation approaches will be needed. Carter et al. (2018) define transformative adaptation in agriculture as intentional alterations to an agricultural system in response to or in anticipation of climate impacts that are so significant that they change fundamental aspects of the system. Such alterations often include one or more of the following attributes:

Crop R&D systems play a critical role in developing the seeds farmers need to maximize productivity and manage the increasing risks they face. Great strides have been made in crop research and development over the last 75 years, contributing to development of the next generation of seeds that are more resilient against droughts, floods, pests, and diseases, as well as producing crops that are more nutritious and productive (Evenson and Golin 2003).

Despite these advances, this paper identifies a range of challenges that must be addressed if the global crop research and development system is going to successfully support the adaptation of crop production systems in contexts where transformative adaptation will be needed. The capacities to conduct modern and rapid crop research and development are lacking in many low-income countries and focused on major staple and cash crops, rather than on more localized traditional crops that may provide viable alternatives where major crops lose viability. Even with improved crop research and development capacities, the seed systems of low-income countries lack the capacity to quickly reproduce and distribute new seed varieties to farmers, highlighting that investment in adoption and extension pipelines is also critical. At the same time, the speed with which climate change is occurring means that crop research and development cycles must be shortened to stay ahead of climate change impacts. This is especially true in the areas most vulnerable to climate risk, such as the rainfed crop production systems that dominate agricultural systems in the developing world.

This paper examines these issues and identifies ways to promote long-term sustainability for food security and nutrition, economic livelihoods, and climate-resilient cropping systems by making strategic investments in crop research and development systems so that the public and private sectors in countries around the world have greater capacity to anticipate the needs of farmers, develop the seeds they need, and get those seeds into their hands.