Nationally determined contributions (NDCs) are a valuable instrument for countries to communicate adaptation priorities and bring international attention to adaptation needs. This paper discusses the adaptation components of the updated NDCs for the 2020-2021 submission cycle. Using a comprehensive qualitative assessment framework, it examines the updated NDCs and compares them to the first round of submissions. By understanding how the NDCs have changed, the paper contributes to a growing literature on adaptation ambition and assessment. 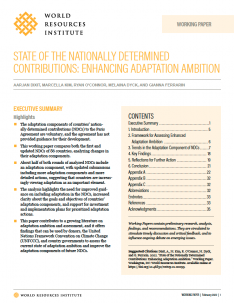 This Working Paper is part of the Climate Resilience Practice within our Center for Equitable Development, and was prepared in partnership with the Climate Program and in contribution to the NDC Partnership. Reach out to Ryan O’Connor for more information.

This Working Paper is part of the Climate Resilience Practice within our Center for Equitable Development, and was prepared in partnership with the Climate Program and in contribution to the NDC Partnership. Reach out to Ryan O’Connor for more information.

Adaptation components are a voluntary element of countries’ nationally determined contributions (NDCs) to the Paris Agreement. While the agreement establishes a basis for adaptation planning through other instruments, it does not provide designated guidance for the presentation of adaptation information in the NDCs. The voluntary inclusion of adaptation in the NDCs is politically salient, as Parties remain divided on whether adaptation components should be a core element of the NDCs or remain in separate instruments.

Using the nine qualitative criteria for assessing adaptation ambition developed in this paper’s methodology, the following are key findings for the updated NDC adaptation components:

The database is available for download through Open Data Portal.

All the data used in this working paper are coming soon on WRI’s Climate Watch platform.

Stories Behind the Adaptation Commitments in the Nationally Determined Contributions of Cambodia, Rwanda, Colombia, and Fiji