Locally Led Climate Adaptation: What Is Needed to Accelerate Action and Support? 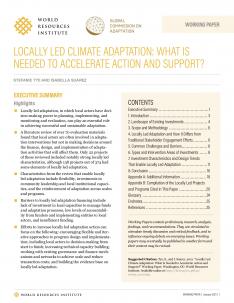 This Working Paper is part of the Global Commission on Adaptation within our Center for Equitable Development and Climate Resilience Practice. Reach out to Stefanie Tye for more information.

This Working Paper is part of the Global Commission on Adaptation within our Center for Equitable Development and Climate Resilience Practice. Reach out to Stefanie Tye for more information.

This working paper examines the existing literature on locally led adaptation, looking at efforts that have optimized finance through direct and consistent collaboration with local actors and identifying initiatives that embody locally led principles rather than traditional stakeholder consultation or participation. In line with the Global Commission on Adaptation’s Year of Action, the authors sought to identify projects and designs that aim to catalyze accelerated action and support for locally led adaptation.

Where possible, the paper includes examples of projects or programs that have been responsive to local priorities and produced benefits (whether initial or over time) in terms of climate resilience. The authors synthesized the essential characteristics and program designs of international and country-driven investments that have reached the local level and enabled locally led adaptation. The application of this knowledge could enhance efforts to increase focus on—and finance for—durable, positive changes via locally led adaptation.

The primary audience for this paper is funders, international and local institutions, and decisionmakers worldwide who are seeking to understand how to invest in locally led interventions that strengthen resilience, including climate resilience.

Despite the recognized need for climate adaptation efforts to be participatory, context-specific, and fully transparent, finance for local adaptation is still severely lacking, and the voices and concerns of local actors who are at the forefront of climate impacts have generally not been meaningfully included in deciding how interventions are financed, designed, and implemented (Mfitumukiza et al. 2020; Dinshaw and McGuinn 2019). The majority of adaptation planning still occurs at the international and national levels, with local institutions and actors participating on the margins and as beneficiaries instead of as agents of change (IIED forthcoming). More must be done to enable locally led adaptation, increase local efforts and capacities sustainably and equitably, and develop locally contextualized solutions.