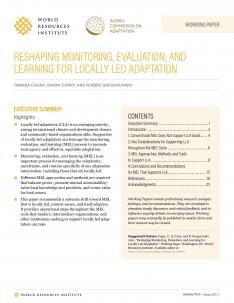 This Working Paper is part of the Global Commission on Adaptation within our Center for Equitable Development, Climate Program, and Climate Resilience Practice. Reach out to Tamara Coger for more information.

This Working Paper is part of the Global Commission on Adaptation within our Center for Equitable Development, Climate Program, and Climate Resilience Practice. Reach out to Tamara Coger for more information.

Locally led adaptation recognizes that people closest to the effects of climate change, especially those facing structural marginalization, require the financing and decision-making power to ensure that adaptation investments reflect their priorities. Supporters of locally led adaptation can leverage monitoring, evaluation, and learning (MEL) processes to balance power, promote mutual accountability, elevate local knowledge and priorities, and create value for local actors. This paper recommends a systemic shift toward MEL that is locally led, context-aware, and itself adaptive. It provides steps throughout the MEL cycle and specific approaches, methods and tools that promote local agency in the interest of more effective and equitable locally led adaptation interventions. It builds on the recommendations of the Global Commission on Adaptation to increase decentralization of adaptation finance to the local level, and aims to support implementation of the eight Principles for Locally Led Adaptation that were developed for the Commission.

A growing body of research and practice is grappling with the opportunities and challenges of MEL for adaptation. Emerging evidence and practice centers on the MEL’s role in building social capital and equalizing the power dynamics that underpin the use and governance of knowledge generated through MEL. Grounded in the principles of locally led adaptation, this paper builds on these fields of research and practice to discuss how MEL can support local agency and reflect local priorities and expertise in the interest of more effective and equitable locally led adaptation interventions.

About This Working Paper

The paper proposes key considerations relevant throughout the MEL cycle that align with the principles for locally led adaptation:

To operationalize these considerations, the paper discusses approaches, methods, and tools specific to each phase of the MEL cycle.

MEL of locally led adaptation requires a long-term systemic shift from traditional MEL to MEL that is locally led, balancing asymmetries in power and accountability. A range of MEL practices and tools are available in the short term to funders, intermediary organizations, and MEL practitioners to support locally led adaptation. However, limitations and practical constraints come with recommended changes to MEL practice, including changes in resources, time, and standard processes. Practical steps throughout the MEL cycle help navigate trade-offs and strengthen locally led adaptation interventions.

To support locally led adaptation through MEL, funders, intermediary organizations, and MEL practitioners should do the following: