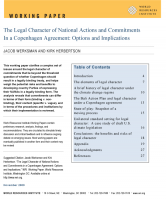 A Copenhagen agreement on climate change will likely take a legally binding form, but one that provides for a range of commitments by countries. This Working Paper clarifies a complex set of issues around the legal character of commitments and weighs the potential risks and benefits to countries of expressing their “nationally appropriate mitigation actions” (NAMAs) in a legally binding form.

The world’s governments may be negotiating the most important treaty in modern history: a multilateral environmental agreement (MEA) that may determine whether humanity can successfully reduce anthropogenic sources of greenhouse gases and avoid the most dangerous consequences of climate change. With less than two full weeks before negotiations are scheduled to conclude in Copenhagen, delegations have yet to agree whether they are aiming at a legally binding treaty or at a political declaration. If it is a treaty, will the text contain legally binding, specific commitments, backed by robust review procedures, or will it be a legally binding agreement with a hollow core?

Even as consensus builds around the need for urgent, collective action to combat climate change, countries remain deeply divided on how efforts to reach this global goal will be equitably shared among and between developed and developing countries. Part of the controversy centers around how developing country “nationally appropriate mitigation actions” (NAMAs) will be expressed in an international agreement, and how procedures for measuring, reporting, and verifying these actions might promote implementation. This Working Paper focuses on the choices facing developing country major economies participating in the Major Economies Forum (MEF) (China, India, Brazil, South Africa, and others) that are under pressure from industrialized negotiating partners to commit to actions that are comparable to those contemplated by richer nations.

This Working Paper clarifies a complex set of issues around the legal character of commitments that lie beyond the threshold question of whether Copenhagen should result in a legally binding treaty, and helps weigh the potential risks and benefits to developing country Parties of expressing their NAMAs in a legally binding form. The analysis reveals that commitments can differ in terms of their form (binding v. non-binding), their content (specific v. vague), and in terms of the procedures and institutions by which their implementation is reviewed.

To provide context, the authors note recent discussions within the Major Economies Forum (MEF) which suggest that MEF countries seem to be moving towards a “bottom up” approach to a climate agreement that places less emphasis on the international legal character of countries’ commitments. The authors then review the legal character and legal implications of previous undertakings in the UN Framework Convention on Climate Change (UNFCCC) and the Kyoto Protocol. The paper then reviews the major proposals submitted by countries to the Copenhagen process, as well as recent versions of the negotiating text (described in the Appendix). The paper also provides a case study of draft U.S. climate legislation, and analyzes the special challenges facing developing country major economies under pressure to take actions comparable to richer countries.

A key conclusion from our analysis is that a post-2012 climate agreement, whether agreed in Copenhagen or thereafter, should take a legally binding form, but one that contains undertakings by countries with a wide range of legal form and content, and that are subject to differentiated review procedures. It notes that some developing country major economies are likely to be held to a higher standard of legal content and review, than other, poorer or smaller developing countries.

Each country has the opportunity to influence the design the agreement’s content and, ultimately, will have to decide whether to become a Party. Signing up to legally binding, clear, specific, measurable, and ambitious commitments demonstrates strong political will to contribute and comply, encourages other countries to do the same, and thus should lead to stronger environmental outcomes. In most cases the international penalties associated with failing to comply with an international treaty are unspecified, and thus the risks of being found in non-compliance seem low. However, a post-2012 climate change regime, built from the “bottom-up” will likely combine multilaterally agreed rules and bilateral arrangements. There are indications that this regime will support performance-based financial mechanisms and carbon markets that could reward countries willing to make more specific undertakings. For example, our case study of draft U.S. climate change legislation suggests that countries undertaking commitments of a stronger legal character may have preferential access to large scale carbon markets, and may be able to avoid the unilateral trade sanctions contemplated by the U.S. and other countries. While each country must weigh these risks and benefits for itself, this Working Paper seeks to assist in this process.