How Can Indonesia Achieve Its Climate Change Mitigation Goal? An Analysis of Potential Emissions Reductions from Energy and Land-Use Policies 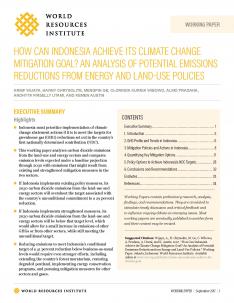 Indonesia is one of the world’s largest emitters of greenhouse gases (GHG). For the past two decades, GHG emissions have increased from almost all sectors, such as land-use (defined as land use, land-use change, and forestry including peat fires), energy, agriculture, industry, and waste. Currently, the land-use and energy sector contribute to 80 percent of greenhouse gas emissions in Indonesia. The national government of Indonesia has committed to reducing unconditionally GHG emissions by 29 percent against a 2030 business-as-usual (BAU) scenario and by up to 41 percent below the 2030 BAU level, subject to international assistance for finance, technology transfer, and capacity building.