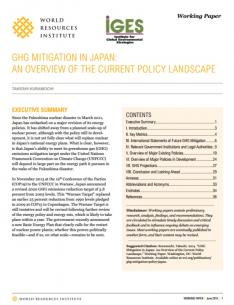 In 2013, in the aftermath of the Fukushima Daiichi nuclear power plant disaster, the government of Japan put forth a revised target to reduce greenhouse gas (GHG) emissions by 3.8 percent from 2005 levels by 2020.

This paper analyzes this target and finds that Japan can likely meet it by continuing electricity-saving efforts and ensuring implementation of existing mitigation policies. An overview of these policies and a comparison of the target to Japan’s earlier 2020 mitigation targets are also presented. The paper concludes with considerations for improving Japan’s current target, as well as future target-setting processes.

Since the Fukushima nuclear disaster in March 2011, Japan has embarked on a major revision of its energy policies. It has shifted away from a planned scale-up of nuclear power, although with the policy still in development, it is not yet fully clear what will replace nuclear in Japan’s national energy plans. What is clear, however, is that Japan’s ability to meet its greenhouse gas (GHG) emissions mitigation target under the United Nations Framework Convention on Climate Change (UNFCCC) will depend in large part on the energy path it pursues in the wake of the Fukushima disaster.

In November 2013 at the 19th Conference of the Parties (COP19) to the UNFCCC in Warsaw, Japan announced a revised 2020 GHG emissions reduction target of 3.8 percent from 2005 levels. This “Warsaw Target” replaced an earlier 25 percent reduction from 1990 levels pledged in 2009 at COP15 in Copenhagen. The Warsaw Target is still tentative and will be revised following further review of the energy policy and energy mix, which is likely to take place within a year. The government recently announced a new Basic Energy Plan that clearly calls for the restart of nuclear power plants; whether this proves politically feasible—and if so, on what scale—remains to be seen.

Even when factoring out GHG emissions avoidance by nuclear power, the ambition level of Japan’s Warsaw Target has taken a step back from the Copenhagen Pledge.

Japan’s Copenhagen Pledge relied on the expansion of nuclear power to help curb emissions. When the GHG emissions avoidance expected through nuclear power is factored out, Japan’s domestic mitigation efforts under the Warsaw Target are only marginally more ambitious than the target that preceded the Copenhagen Pledge (so-called Mid-Term Target of 2009, pledging -9 percent domestically by 2020 from 1990 levels). The Warsaw Target arguably takes a step backward from the Copenhagen Pledge by lowering the ambition level similar to the pre-Copenhagen Mid-Term Target and factoring out the CO2 emissions avoidance that would have been achieved by nuclear power. Moreover, the Japanese government has not yet explained how its Warsaw Target is consistent with a planned 80 percent reduction by 2050 from 1990 levels stipulated in the fourth Basic Environment Plan, a long-term comprehensive national plan for environmental conservation.

Japan’s evolving policy landscape includes sector-specific mitigation-related measures, but the lack of information on expected emissions makes it difficult to quantify their impact.

In the aftermath of the Fukushima disaster, Japan has implemented several policy measures that help position it to meet its mitigation targets, including a full-fledged feed-in tariff scheme for renewable electricity, a global-warming tax, and a number of measures to improve the thermal insulation level of households. These policies apply to sectors (renewable energy, residential, and commercial) where few aggressive policy measures were taken before the Fukushima disaster. However, the Japanese government has not reported the expected CO2 emissions reductions for most policy measures. This omission is at least partially attributable to the lack of a policy implementation plan to achieve the 2020 target.

The Japanese government is more explicit about promoting high-efficiency coal-fired power plants both domestically and overseas. While these plants are perhaps less CO2-intensive than those currently operating, they are still highly CO2-intensive compared to other fossil-fired power generation technologies in absolute terms. As with the Warsaw Target, the government has not clearly explained how its promotion of high-efficiency coal-fired power plants is consistent with its 2050 mitigation goal and the global 2°C target.

Another objective was to assess the achievability of the Warsaw Target by comparing it with three emissions projections under continued mitigation efforts available in the literature. Limited availability of information on how the target was developed made it impossible to draw definite conclusions. Nonetheless, the results indicate that the continuation of enhanced electricity-saving efforts begun after the Fukushima nuclear disaster is crucial to achieving the Warsaw Target. When such enhanced electricity-saving efforts are combined with the continuation of other mitigation efforts and the modest economic growth rates estimated by the International Monetary Fund (IMF) and the International Energy Agency (IEA), Japan will likely achieve the Warsaw Target.