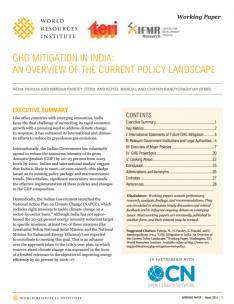 The Indian Government has made a voluntary international commitment to reduce the emissions intensity of its gross domestic product (GDP) by 20–25 percent from 2005 levels by 2020. Domestically, India’s National Action Plan on Climate Change (NAPCC) includes eight national missions to support areas such as energy efficiency and solar energy.

This paper provides an overview of these and other existing national policies, as well as policies under development, that are likely to reduce greenhouse gas (GHG) emissions in India. It also identifies priorities for effective policy implementation including improved coordination among different levels of government, institutional capacity building, and sufficient financing.

Like other countries with emerging economies, India faces the dual challenge of reconciling its rapid economic growth with a pressing need to address climate change. In response, it has enhanced its international and domestic efforts to reduce its greenhouse gas emissions.

Internationally, the Indian Government has voluntarily agreed to reduce the emissions intensity of its gross domestic product (GDP) by 20–25 percent from 2005 levels by 2020. Indian and international studies suggest that India is likely to meet—or even exceed—this pledge based on its existing policy package and macroeconomic trends. Nevertheless, significant uncertainty surrounds the effective implementation of these policies and changes in the GDP composition.

Domestically, the Indian Government launched the National Action Plan on Climate Change (NAPCC), which includes eight missions to tackle climate change on a sector-by-sector basis. Although India has not apportioned the 20–25 percent energy intensity reduction target to specific missions, at least two of these missions (the Jawaharlal Nehru National Solar Mission and the National Mission for Enhanced Energy Efficiency) are expected to contribute to meeting this goal. This is an advance over the approach taken in the 11th 5-year plan, in which concern about climate change was expressed in the form of a limited reference to the objective of improving energy efficiency by 20 percent by 2016–17.

This working paper summarizes the key national missions and policies already implemented and in development that are likely to reduce greenhouse gas (GHG) emissions in India. Some of the national missions (e.g., the National Solar Mission) are characterized by clear and ambitious targets, detailed policies and measures, and supporting action plans. Others, such as the National Mission on Sustainable Habitat, have not yet developed clear action plans for implementation. Even where the government has formulated policies and measures, a need remains for adequate financing, coordination between national and state implementing agencies, and better coordination of policy initiatives to meet the desired targets and goals.

Looking ahead, India will need to prioritize strategies that strengthen implementation of existing policies if it is to meet its mitigation goals. These strategies include ensuring adequate financing and institutional capacity, as well as better vertical coordination of national, state, and local governments and better horizontal coordination of concerned line ministries and departments. A systematic approach for tracking the progress of mitigation actions could build on the existing system for national communications to the United Nations Framework Convention on Climate Change (UNFCCC) and the Indian Network for Climate Change Assessment (INCAA). Such an approach also could help ensure effective and timely feedback for implementation of mitigation actions.