This paper examines how natural resource governance laws, policies, regulations and guidelines in 12 mining countries characterize women and gender, and consider their potential to bring about transformative change to achieve gender equality. 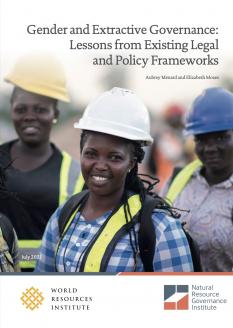 This Report is part of WRI's Gender and Environmental Rights work within our Center for Equitable Development. Reach out to Elizabeth Moses for more information.

This Report is part of WRI's Gender and Environmental Rights work within our Center for Equitable Development. Reach out to Elizabeth Moses for more information.

Greater gender equality accompanies economic advancement. However, in countries rich in oil, gas and minerals, economic advancement has not served women and gender minorities as well as men. On the contrary, gender inequality is more pronounced in countries significantly reliant on the extractive sector. The negative impacts of overreliance on the extractive sector appear at both the national level and the sites of major extraction projects. While the gendered issues related to the extractive sector have been broadly acknowledged, efforts to address them are not well developed.

This report focuses on gender and governance of the extractive industries, and is part of the larger Gender and Extractives project, funded by the Open Government Partnership (OGP) and the World Bank Multi-Donor Trust Fund, and executed by the Natural Resource Governance Institute (NRGI) in partnership with the World Resources Institute (WRI). It aims to inform a new generation of gendered OGP commitments in relation to the extractive sector, building on the momentum created by the Break the Roles campaign and the growth in attention now paid to advancing gender equality in the extractive sector. The research examined the legal and policy frameworks in 12 OGP countries: Argentina, Canada, Colombia, Ghana, Indonesia, Kenya, Morocco, Mongolia, Nigeria, Peru, Sierra Leone and Tunisia, identifying 62 laws, policies, regulations, guidelines and other official documents that referenced the extractive sector and gender or women.

A Community Action Toolkit: A Roadmap for Using Environmental Rights to Fight Pollution

Mongolia Shows How to Fight for Environmental Justice