Transparency and Poor People’s Struggle for Clean Water in Indonesia, Mongolia, and Thailand 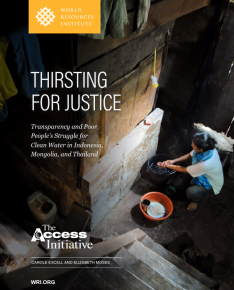 Industrial facilities release upwards of 400 million tons of toxic pollutants into the world’s waters each year. Yet secrecy around the amount and type of chemicals that companies discharge is still the norm, especially in Asia. Contaminated water threatens the region’s poorest communities—those who still depend on local water sources for their lives and livelihoods. Without access to water pollution information, they can’t determine whether their water is safe to drink, fish or give to their animals. They can’t participate in decision-making, hold law-breaking polluters to account or lead local cleanup efforts.

Thirsting for Justice: Transparency and Poor People’s Struggle for Clean Water in Indonesia, Mongolia, and Thailand reveals that, like many Asian countries, the governments of Indonesia, Mongolia and Thailand are not effectively telling the public if the water they rely on for drinking, bathing, farming and fishing is polluted or dangerously toxic. The Access Initiative (TAI) report finds that, despite passing strong “right to know” laws, these governments are putting their poorest communities at risk by not providing the water pollution information that people need.

Working with TAI partners, the report authors performed a legal analysis to identify what pollution information governments must release to the public. They then reviewed state of environment reports, water quality monitoring portals and other public databases and documents to assess the availability of this information in practice. They also tracked 174 information requests that local community members submitted and spoke with close to 150 affected people to understand the barriers that they faced when accessing water pollution information. This analysis shows that, although governments have passed laws that protect citizens’ right to environmental information and mandate disclosure of this data, officials are failing to provide information that they are legally obligated to release.