This paper, for the first time, analyses and presents the emission reduction potential of the Indian companies who have set science-based targets and highlight as to how it contributes to meeting the India’s NDC goals. The paper provides insights into the SBTs of 22 Indian companies who have adopted GHG emission reduction targets that are aligned with climate science. 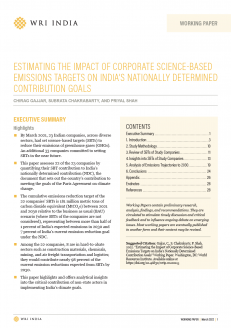 This Working Paper is part of the The Science Based Targets initiative (SBTi) within our Climate Program, and WRI's Center for Sustainable Business. Reach out to Subrata Chakrabarty for more information.

This Working Paper is part of the The Science Based Targets initiative (SBTi) within our Climate Program, and WRI's Center for Sustainable Business. Reach out to Subrata Chakrabarty for more information.

This paper quantifies the emissions reductions potential of the commitments by 22 Indian businesses that have set SBTs and their expected impact on India’s national emissions in 2030. This paper uses information such as baseline emissions (Scopes 1 and 2), approved SBTs, business activity in the base year and projected growth, and targets or goals adopted before setting the SBTs. The information was obtained from publicly available sources or through interviews with the companies’ representatives.

Other Prior Goals Set by Companies Play a Key Role in Adopting and Setting SBTs:

COP26: Key Outcomes From the UN Climate Talks in Glasgow

From Pledges to Action: What’s Next for COP26 Corporate Commitments