Coastal Capital: Ecosystem Valuation for Decision Making in the Caribbean 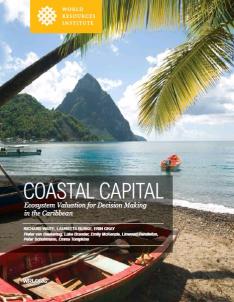 This Working Paper is part of the Coastal Capital: Economic Valuation of Coastal Ecosystems in the Caribbean within our Food Program, Water Program, Economics Center, and Food Program. Reach out to Richard Waite for more information.

This Working Paper is part of the Coastal Capital: Economic Valuation of Coastal Ecosystems in the Caribbean within our Food Program, Water Program, Economics Center, and Food Program. Reach out to Richard Waite for more information.

This guidebook details the steps in conducting a coastal ecosystem valuation to inform decision making in the Caribbean. It guides valuation practitioners—both economists and non-economists—through the three phases of a valuation effort (scoping, analysis and outreach), with an emphasis on stakeholder engagement in all phases.

The guidebook also includes examples of best practice studies that use valuation to answer the most pressing coastal policy questions in the Caribbean, detailed reporting guidelines for future studies, and numerous links to other economic valuation manuals and tools in the public domain—many of them freely available for download.

Tropical coastal ecosystems—including coral reefs, mangroves, beaches, and seagrasses—provide a range of valuable goods and services to people and economies across the Caribbean. These ecosystems contribute to tourism, fisheries, shoreline protection, and more. However, despite their importance, coastal ecosystems are under threat from numerous human pressures, including overfishing, pollution, and climate change. Left unchecked, these pressures will degrade coastal ecosystems, reducing benefits from these ecosystems in the future.

A wide range of policy, regulatory, and management tools are available to reduce pressures on coastal ecosystems and promote their sustainable use. These include marine spatial planning, marine protected areas, fishing regulations, land use planning, sewage treatment requirements, integrated watershed management, and many others. Decision makers rely on many types of information and analysis—including political, social, economic, and environmental—to identify issues of concern and choose among alternative courses of action. Balancing conservation and development requires consideration of all these factors in determining which projects to pursue, policies to enact and enforce, and investments to make.

Economic analysis, in particular, can help decision makers allocate scarce resources among competing societal demands. However, traditional economic analysis often fails to fully consider benefits provided by coastal ecosystems and other natural resources—especially those services, such as coastal protection, that are not bought and sold in markets. Undervaluing the benefits that coastal ecosystems provide—as well as the costs of insufficient coastal protection—can lead to underinvestment in the protection and management of these ecosystems, and encourage short-sighted decisions that fail to take the long-term benefits provided by healthy ecosystems into account.

Economic valuation has the potential to help turn the tide by making the economic case for investment in coastal ecosystem protection. Economic valuation can show the benefits that coastal and marine ecosystems provide to society using monetary, social, and biophysical metrics that are easily understood and are the basis for many policy decisions. In the Caribbean, coastal ecosystem valuation has contributed to better informed and more holistic decision making about resource use, justified policies and investments that protect coastal ecosystems or promote their sustainable use, and identified sources of finance for coastal conservation. However, while more than 100 valuation studies have been conducted in the Caribbean’s coastal areas, only a minority of these studies have had an observed influence on policy, management, or investment to date.

While these cases of observed use in decision making are limited in number, they contain valuable lessons for future studies and highlight economic valuation’s potential impact in the region. A number of key enabling conditions have contributed to these studies’ influence, including:

These enabling conditions informed the development of this guidebook, which details the main steps in conducting an economic valuation of coastal ecosystems to inform decision making in the Caribbean. The guidebook leads practitioners through the scoping, analysis, and outreach and use of results phases of a valuation effort, summarized below (Figure 1):

The most effective studies typically entail close collaboration between valuation practitioners, stakeholders, and decision makers throughout all phases of the valuation effort. This collaboration is often an iterative process, where analysis, interpretation of results, and reanalysis occur until the final results reflect scenarios and policy outcomes that are broadly acceptable to stakeholders and decision makers.

There are already many economic valuation guidelines, frameworks, and tools in the public domain. This guidebook builds on these resources whenever possible. It fills three significant gaps by providing:

Human pressures on coastal ecosystems are considerable across the Caribbean, but keeping these valuable ecosystems healthy is critical to the continued well-being of people and economies in the region. This guidebook aims to help practitioners conduct coastal valuations in the Caribbean that will have greater influence on policy, management, and investment decisions—ultimately helping to safeguard these resources for generations to come.