Toward an Environmental, Health, and Safety Regulatory Framework 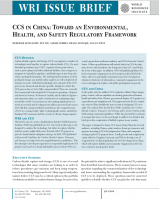 This Issue Brief is part of the Carbon Capture and Storage (CCS) within our Energy Program. Reach out to Deborah Seligsohn for more information.

This Issue Brief is part of the Carbon Capture and Storage (CCS) within our Energy Program. Reach out to Deborah Seligsohn for more information.

This brief frames how carbon dioxide capture and storage (CCS) might be regulated within the Chinese environmental policy context, with an emphasis on ensuring protection of people and the environment.

Carbon dioxide capture and storage (CCS) is one of several technologies that many countries are looking to in order to reduce greenhouse gas emissions and keep rising temperatures from reaching dangerous levels. Many experts and policy makers believe CCS may be a critical option in the portfolio of solutions available to combat climate change, because it has the potential to achieve significant reductions in CO2 emissions from fossil fuel–based systems. There remain, however, many questions regarding the commercialization of the technology and issues surrounding the regulatory frameworks needed if CCS is to be deployed. These questions must be answered quickly to identify whether CCS can play the role that many hope, and if so, how best to deploy it. Renewable energy sources are also projected to play a major role in the future and are rapidly expanding. Renewables, however, are not predicted to overtake fossil fuel generation for several decades; hence CCS, if safely deployed, could help provide a bridge to a more sustainable energy future.

As CCS technology moves from an R&D effort to demonstration- scale projects and ultimately commercial developments, governments in many major economies, including Australia, Brazil, Canada, China, the European Union, France, Italy, Norway, South Africa, the United Arab Emirates, the United Kingdom, and the United States have announced plans to construct commercial-scale CCS demonstrations. The International Energy Agency’s CCS Roadmap, designed to determine the role for CCS in achieving a 50 percent reduction in 2005 energy-related global CO2 emissions by 2050, states that 100 CCS projects should be online by 2020 (IEA 2009b; IEA 2009c).

The first tranche of announced demonstration projects—let alone the 100 projects suggested by the IEA—will require not only significant financial investments by industry and the private sector, but also a robust regulatory framework for ensuring that projects proceed safely. The development of rigorous regulations for ensuring environmental protection and managing the risks associated with CCS efforts is paramount, and pilot regulatory frameworks for protecting environmental health and safety have been developed—and in some cases adopted—for the European Union, Australia, and the United States.

China now emits more greenhouse gas emissions than any other country, due in large part to its reliance on coal to fuel its expanding economy. In 2009, China derived 70 percent of its primary energy from coal, and this heavy dependence is projected to continue into the future. Since CCS offers the prospect of reducing greenhouse gas emissions while coal use continues, the emerging technology is a key element in prevailing energy use models in China. These models estimate emissions rising to a peak by 2030, but declining after 2030 if CCS is widely deployed in China (IEA 2009).

Key elements to successful deployment of CCS include not only development of technology, geologic knowledge, financing instruments, and long-term stewardship rules,1 but also a regulatory framework for ensuring environmental health, safety, and efficacy. While CCS technology development and research are already underway in China, a comprehensive domestic regulatory framework to provide oversight of future CCS projects has not yet been developed. While China’s CCS framework should be informed by emerging regulatory frameworks in other countries, it must also be crafted to fit China’s specific legal and regulatory systems.

This brief frames how CCS might be regulated within the Chinese environmental policy context, with an emphasis on ensuring protection of people and the environment. After summarizing China’s existing CCS research and demonstration projects, it outlines the country’s existing CCS-related legal structure and the government agencies with a role in oversight of CCS development in China. The paper then lays out CCS-related environmental, health, and safety challenges and gaps in China’s existing regulatory and legal structures that need to be addressed for China to establish an effective and safe regulatory framework. Next it provides key criteria for geologic storage—universally applicable and based on WRI’s stakeholder-led Guidelines for Carbon Dioxide Capture, Transport and Storage—which China could apply in order to ensure environmental protection and human health and safety. This list of criteria focuses exclusively on regulations for geologic storage, the area where there is the most technical uncertainty and where existing regulations are less applicable compared with capture and transport.

Appendix I gives a comprehensive overview of the laws and policies in China that pertain to CCS development and deployment. Additional supporting materials, including a comparison of proposed CCS frameworks in the European Union, United States, and Australia, are available online. The information in this policy brief can be utilized by Chinese officials, other governments, and industry representatives to better understand the evolving regulatory environment for CCS in China. As governments and businesses begin bilateral and multilateral CCS demonstration projects, a shared basis for communication and a common understanding of regulatory approaches will be increasingly critical.

Findings and Next Steps

This brief demonstrates that political institutions exist to support a CCS regulatory framework in China, along with some potentially adaptable laws and regulations. However, elements of CCS regulation not closely related to current industrial activities, primarily those related to geological storage, are not yet established. These will need to be in place before large-scale commercial CCS initiatives can move forward. One approach is to develop and implement a pilot regulatory framework for the first demonstrations that can be revisited prior to wide-scale deployment of the technology. With regard to environmental, health, and safety issues related to storage, China can and should look to key criteria used by other countries, that are also outlined in this paper, in designing its own CCS regulations and legislation.

Opportunities and Challenges for Carbon Capture and Sequestration

Testimony: China's Prospects for Shale Gas and Implications for the U.S.