Bus Rapid Transit in China: A Comparison of Design Features with International Systems 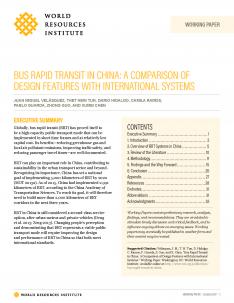 As the recent white paper on China’s transport for the 13th Five-Year Plan period (2016–2020) states, China must set higher standards for the transport development to “realize the Chinese Dream of the great rejuvenation of the Chinese nation” (State Council Information Office 2016). In this spirit, the working paper benchmarks BRT systems in China against international standards, in order to identify areas that need improvement. The document assesses 30 of the 38 BRT indicators established in the BRT Standard, by employing analysis of variance (ANOVA) to compare the differences between mean Chinese and international BRTs, based on 99 data points, representing 59 cities (18 in China) and 21 countries.

Chinese cities are growing very rapidly, and the number of individual motorized vehicles is rising, with negative impacts on air pollution, congestion, and traffic fatalities. At the same time, demand for transit services is increasing. Chinese leaders have recognized public transportation as a key element for addressing all of these issues and helping the national government achieve its transport and climate change mitigation goals.

To guide planners as they prepare to expand China’s BRT, this working paper benchmarks China’s BRT systems against international standards. It identifies 11 design indicators on which Chinese systems score significantly lower than international counterparts and makes recommendations for improving them:

BRT can play an important role in China, contributing to sustainability in the urban transport sector and beyond. Recognizing its importance, China has set a national goal of implementing 5,000 kilometers of BRTs by 2020 (MOT 2013a). As of 2015, China had implemented 2,991 kilometers of BRT, according to the China Academy of Transportation Sciences. To reach its goal, it will therefore need to build more than 2,000 kilometers of BRT corridors in the next three years.

BRT in China is still considered a second-class service option, after urban metros and private vehicles (Deng et al. 2013; Zeng 2013). Changing people’s perception and demonstrating that BRT represents a viable public transport mode will require improving the design and performance of BRT in China so that both meet international standards.