Bioeconomy for the Amazon: Concepts, Limits and Trends for a Proper Definition of the Tropical Forest Biome

This working paper seeks to compare what has been understood by the term bioeconomy; its connotations, limitations, and trends when applied to the Brazilian Legal Amazon. It also seeks to highlight the specific needs of the bioeconomy in the region—especially for the tropical forest biome—where the objective is to safeguard and value the biological, cultural, and social diversity present in the region. 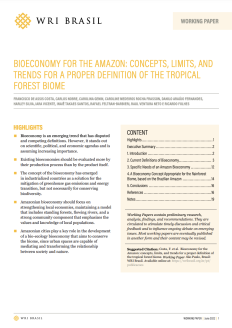 This Working Paper is part of the New Economy For the Brazilian Amazon (NEA-BR) within WRI Brasil and WRI's New Climate Economy. Reach out to Carolina Genin for more information.

This Working Paper is part of the New Economy For the Brazilian Amazon (NEA-BR) within WRI Brasil and WRI's New Climate Economy. Reach out to Carolina Genin for more information.

Bioeconomy is an emerging term with several disputed definitions. Its first definitions and uses (e.g., OECD and EU) were aimed at clarifying the transition from fossil fuel-dependent economies to models based on biological inputs of agricultural origin but not necessarily biodiverse.

These definitions were adopted by Brazilian institutions and economic sectors focused on the production of biofuels and biochemistry at scale and are more appropriate for consolidated agricultural areas.

Faced with this new frontier of economic thinking and with the need to preserve the planet's biotic and climate balance without sacrificing local development, it is understood that the bioeconomy in tropical forests such

as the Amazon must integrate both into an economic system and a socio-ecological landscape, with an emphasis on the interaction with human societies and the forest. Above all, it must be based on the integral conservation of the biome, understood as a living, diverse, and deforestation-free system.