The Economic Contribution of Belize's Coral Reefs and Mangroves 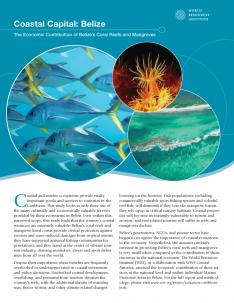 This study evaluated the average annual contribution of reef- and mangrove-associated tourism, fisheries, and shoreline protection services to the economy of Belize.

Coastal and marine ecosystems provide vitally important goods and services to countries in the Caribbean. This study looks at only three out of the many culturally and economically valuable services provided by these ecosystems in Belize. Even within this narrowed scope, this study finds that the country’s coastal resources are extremely valuable. Belize’s coral reefs and mangrove-lined coasts provide critical protection against erosion and wave-induced damages from tropical storms; they have supported artisanal fishing communities for generations; and they stand at the center of vibrant tourism industry, drawing snorkelers, divers and sport fishermen from all over the world.

Coral reef- and mangrove-associated tourism contributed an estimated US$150 million to $196 million to the national economy in 2007 (12 percent to 15 percent of GDP). Fishing is an important cultural tradition, as well as a safety net and livelihood for many coastal Belizeans. Annual economic benefits from reef and mangrove dependent fisheries is estimated at between US$14–16 million. Reefs and mangroves also protect coastal properties from erosion and wave-induced damage, providing an estimated US$231 to US$347 million in avoided damages per year. By comparison, Belize’s GDP in 2007 was US$1.3 billion. These estimates capture only three of the many services provided by coral reefs and mangroves, and should not be considered the “total” value of these resources. These numbers should be regarded as a lower bound estimate.

Despite their importance, these benefits are frequently overlooked or underappreciated in coastal investment and policy decisions. Unchecked coastal development, overfishing, and pressures from tourism threaten the country’s reefs, with the additional threats of warming seas, fiercer storms, and other climate-related changes looming on the horizon. Fish populations, including commercially valuable sport-fishing species and colorful reef fish, will diminish if they lose the mangrove forests they rely upon as critical nursery habitats. Coastal properties will become increasingly vulnerable to storms and erosion, and reef-related tourism will suffer as reefs and mangroves decline.

Belize’s government, NGOs, and private sector have begun to recognize the importance of coastal ecosystems to the economy. Nevertheless, the amount currently invested in protecting Belize’s coral reefs and mangroves is very small when compared to the contribution of these resources to the national economy. The World Resources Institute (WRI), in collaboration with WWF Central America, assessed the economic contribution of these services at the national level and within individual Marine Protected Areas in Belize.