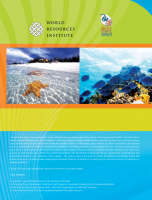 This working paper looks at the benefits that coastal ecosystems provide to the Dominican Republic. The studies highlight the contribution of coastal ecosystems to the economy and the need for greater investment in protecting coastal and marine ecosystems, including better management of marine fisheries, protection of existing reserves, and enforcement of coastal development guidelines.

Coastal and marine ecosystems provide many valuable services to the people and economy of the Dominican Republic. At first glance, these benefits can be difficult to see. Reefs and mangroves help to build beaches and slow erosion, draw local and international tourists to the coast, and provide habitat for valuable recreational commercial fish. Unfortunately, these services are often overlooked in key development and policy decisions. As a result, coastal ecosystems are threatened by unsustainable coastal development, pollution, overfishing, and other local and global pressures.

One of the key barriers to better decision-making is lack of information and understanding of the scope and value of benefits provided by these ecosystems. Little work has been done on this topic in the Dominican Republic, and data gaps make it difficult to assess the economic impact of ecosystem services provided by coral reefs at the national level.

The studies presented here look at a small sample of the benefits that coastal ecosystems provide to the Dominican Republic. These ecosystems (a) protect white sand beaches in vital tourism areas; (b) provide habitat for commercial fisheries; (c) provide the engine for potential tourism growth in a small marine protected area; and (d) generate local tourism dollars in the southwestern part of the country. The studies highlight the contribution of coastal ecosystems to the economy and the need for greater investment in protecting coastal and marine ecosystems, including better management of marine fisheries, protection of existing reserves, and enforcement of coastal development guidelines.

The first two studies in this paper look at the importance of coralline beaches in the Dominican Republic. The first study makes the case for the economic importance of beaches by assessing the losses that could ensue from continuing beach erosion. The second study argues that coral reefs play an important role in reducing wave energy and thus protecting coastal beaches from erosion. Together, these studies make the case for investing in protection of beaches in the Dominican Republic, including renewed efforts to protect coral reefs.

Potential economic impacts of beach erosion. This study assesses potential losses to the hotel industry alone if beach erosion continues at the current pace. We use a hedonic price technique to estimate the relationship between the price of a hotel room and the width of the beach (perpendicular to the shoreline) in front of the resort. Our results suggest that current rates of beach erosion would result in revenue losses to the resorts of $52–$100 million over the next 10 years.

Modeling the potential impacts of coral reef decline on beach erosion. In their natural state, beaches are in a dynamic equilibrium between the sources that supply their sand and the forces that erode it. Corals and other organisms that inhabit coral reefs supply sand to adjacent beaches and control the rates of beach erosion by reducing the energy of incoming waves. The Dominican Republic has suffered from increased rates of beach erosion in recent years. This study uses an Excel-based model to examine the role of coral reefs in reducing wave energy and to estimate the potential increase in beach erosion that could result from further degradation of the reefs. We find that 10 years after the disappearance of live corals, erosion rates could increase by more than 100 percent on eastern beaches and by more than 65 percent in the south.

Slowing the pace of beach erosion in the Dominican Republic will require protecting the ecosystems that help to protect the coastline, including coral reefs, mangroves, and sand dunes. Regulations for coastal development should be strengthened and enforced, including limiting construction in sensitive areas. The protection of coral reefs will require curbing overfishing, reducing pollution (both from the hotel industry and from agricultural runoff), and reducing deforestation.

Marine fisheries in the Dominican Republic support an estimated 9,000 fishermen. It is a small-scale industry, with 99 percent of landings sold domestically. In this study, we identify the major commercial species in the Dominican Republic that depend on mangroves or coral reefs at some point in their life cycle, and examine the changes in landings and associated revenues for these groups over the past few decades. Using FAO landing data for three periods (1982–86, 1992–96, and 2002–06), we find that landings for many key commercial species—including spiny lobster, king mackerel, southern red snapper, and yellowtail snapper—grew significantly between the first two periods and then dropped sharply in the third, with recent landings for most species falling well below levels during the 1980s. This pattern typically suggests that fish populations have been overexploited, and unless steps are taken to protect remaining stocks, fisheries will continue to decline. For local fishermen, gross income from reef-dependent fisheries has decreased by nearly 60 percent over the past decade.

These results demonstrate that the protection of coral reefs and mangroves is vital to the welfare of the fishing communities that depend on these resources for their livelihoods. It is essential for the Dominican Republic to improve its capacity to enforce regulations protecting mangroves and fisheries (Silva 2003). Existing regulations include Decree 303 of 1987, which bans activities that destroy mangroves, and Law 307 of 2004, which regulates fishing and aquaculture.

La Caleta National Marine Park is located 15 miles from Santo Domingo and just two miles from the airport. Due to its healthy reefs and multiple shipwrecks, the park has become a popular SCUBA diving site for people living in the city. The area around the park is also important for fishing, traditionally providing a source of food and income for people living in the town of La Caleta and its vicinity. In recent years, the park has suffered from overfishing, threatening the livelihoods of local fishermen. In response, the fishermen have begun exploring the potential for the tourism industry, and are working to establish an aquatic center to offer recreational activities in the park. This study assesses the willingness to pay (WTP) of dive tourists for a dive trip in the park. We find that the revenue maximizing fee would be $53 per two-dive trip for local visitors and $59 per two-dive trip for international visitors. Assuming a gradual increase in visitation, we estimate that fishermen could earn 90 percent of their current income over the short term through dive tourism alone.

Additional income from snorkeling, kayaking, and other business opportunities associated with the reserve should enable fishermen to earn more from tourism than from fishing over the coming years.

The three national parks that make up the UNESCO Biosphere Reserve in the Dominican Republic provide habitat for many rare and threatened plant and animal species. In Parque Jaragua, the beach at Bahía de las Águilas is considered one of the most beautiful and best preserved beaches in the country. Each year, the reserve receives over 24,000 visitors, mostly Dominican citizens. Visitors travel to the reserve by land from all over the country, stopping at different locations along the way to purchase gasoline and food. These travel expenses provide important economic benefits to the small communities on the way to the reserve. Visitors spend approximately $523,000 during stopovers between their cities of origin and the reserve, and $511,000 in lodging (hotel rooms and food) each year. Visitors pay an additional $136,000 in park fees, which help cover the management activities of the reserve.

Areas in and around the reserve in the southwest, however, are currently being considered for mining and mass-tourism developments that could have significant impacts on the ecologically fragile areas in the reserve (ACRD 2004). If this area follows the established tourism-development model, which focuses on attracting foreign visitors, it is likely that its value as a center for recreation and enjoyment for Dominicans will be diminished, impacting the economic benefits for towns in the surrounding areas as well as the ecological value of the park itself. Maintaining the region’s low-intensity, ecologically friendly tourism model and discouraging large-scale, intensive tourism and mining in and around the reserve would be a benefit to the Dominican people and the nation’s biodiversity.

These studies provide insight into the value of some of the key ecosystem services provided by coastal ecosystems in the Dominican Republic. We examined the value of coralline beaches, reef- and mangrove-dependent fisheries, and ecotourism. This is a critical first step in a country where ecosystem services are typically given very little consideration in decision-making, both in the public and the private sector. Some of the main findings include:

Protecting coastal ecosystems will provide the longest-term, most cost-effective solution to problems of beach erosion, while also sustaining fisheries, improving biodiversity, and enhancing other ecosystem services. It is in the long-term economic interest of the Dominican Republic to: