Seven Barriers to U.S. Business Leadership on Climate Policy and How to Break Them Down

Corporate climate action in the United States has accelerated over the past decade. However, many companies have yet to include climate action as a central tenet of their government affairs agenda. This working paper identifies seven barriers that can stall corporations in the U.S. from advocating for climate policy at the federal level, so that companies can break them down and embrace climate advocacy. 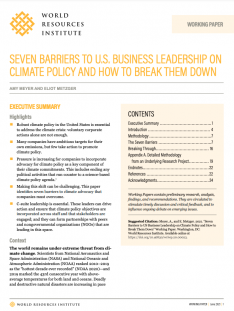 This Working Paper is part of Responsible Corporate Advocacy within WRI's Center for Sustainable Business. Reach out to Daniel Baker for more information.

This Working Paper is part of Responsible Corporate Advocacy within WRI's Center for Sustainable Business. Reach out to Daniel Baker for more information.

This paper identifies barriers that prevent corporations in the United States from advocating for climate policy so that companies can break them down and embrace climate advocacy. We find companies face seven key barriers to comprehensively adopting a science-based climate policy agenda. None of these barriers are an excuse for inaction. The purpose of this paper is to help individuals within a company anticipate and overcome these obstacles. In the conclusion, we offer a checklist of specific actions and strategies to clear multiple barriers (e.g., conducting a risk analysis) and to help advance essential public policies that address climate change.

The audience for this paper is C-suite and other key staff members within large (Fortune 500) companies that strive to be climate leaders. Though the United States grants companies of all sizes the right to engage in political lobbying and campaign financing, those that have larger operations and revenue have a greater capacity, empowered by greater resources, to directly participate in the federal policymaking process. Similarly, this paper focuses on political influence at the federal level.

This paper identifies seven key barriers to U.S. business leadership on climate policy. As shown in Figure 1, the barriers fall into the categories of Organization and Strategy, Intermediaries, and Policy Context.

In corporate structures, the sustainability team is not necessarily empowered by the chief executive officer (CEO) or board to incorporate climate leadership into lobbying priorities. Other key decision-makers, such as the government affairs or investor relations team, may be unaware of or unconcerned with the company’s climate goals. Disconnection here can lead to misalignment between a company’s climate and lobbying strategies. Companies will struggle to advocate effectively for climate policy outcomes unless they have clear mandates and priorities, from executive management and the board, to align these teams’ objectives.

Climate change is not a top advocacy priority for most companies. Many companies see climate policy as “not in our lane” if they are not major emitters, energy-intensive users, or clean energy producers. Instead, they prioritize their advocacy efforts around other issues (e.g., tax or trade policy) considered to be more material. A sense of having limited political capital exacerbates this dynamic.

Understanding the science of climate change, the policy impacts on an individual business or industry sector, and the costs of inaction require significant expertise. Not all companies have invested the necessary time and resources to “get smart” on climate change and the policies that could avert its worst effects.

Short-term profit often prevails over long-term public (and private) interests. The pressure of quarterly reporting, driven by legal requirements and a model of shareholder primacy, disadvantages long-term investments in climate change. Companies too often have short-term motivations, which may lead them to act against the company’s, and society’s, long-term interests.

Business associations wield immense influence with policymakers, and some have been built to defend industries with the most to lose. For some multisector trade associations, this means that on climate change, the interests of fossil fuel–dependent industries come first and at the expense of other members’ interests.

Perceived risks of lobbying for climate action can outweigh perceived benefits. Companies risk facing backlash from numerous stakeholders, including politicians, consumers, customers, employees, and even the board of directors.

Major climate policy had been absent from the congressional agenda for the decade prior to the 2020 election. Without large-scale climate legislation to rally behind, many companies are unclear on what role they should play.

The world remains under extreme threat from climate change. Scientists from the National Aeronautics and Space Administration (NASA) and National Oceanic and Atmospheric Administration (NOAA) ranked 2010–2019 as the “hottest decade ever recorded” (NOAA 2020)—and 2019 marked the 43rd consecutive year with above-average temperatures for both land and oceans. Deadly and destructive natural disasters are increasing in pace and intensity (NOAA, NCEI 2020). Meanwhile, research continues to show links between climate change, poverty, health, and racial justice, just to name a few salient issues (Kaplan 2020). Now is the time to act.

Until recently, many companies have been far ahead of the federal government in the United States when it comes to taking individual climate action. It has become commonplace for companies to publish annual sustainability reports that address climate change. Increasingly companies are setting emissions targets for themselves through the Science-Based Targets initiative (SBTi), committing to 100 percent renewable energy and funding research and development for technologies such as carbon capture, energy storage, and more. Companies are taking these actions in the absence of or beyond their legal requirements, and in recent years they have done so while the US federal government has rolled back environmental protections. Given new federal leadership in 2021, it is expected that the government will pivot and take strong climate action.

Voluntary corporate action is not enough—public policy is needed to shift the United States to a 1.5˚C pathway. Even if every company in the world were to commit to decreasing its emissions in line with the goals of the Paris Agreement, we would still be far from meeting our targets. Not only are there additional sources of greenhouse gas (GHG) emissions outside of private industry, but many commitments can only be met if government action is forthcoming; moreover, voluntary commitments can be disregarded with limited cost. Companies are not the only source of emissions, and without proper government-imposed policies and market signals, this transition will fail to happen as fast as is needed.

Historically, some private sector interests have worked against the adoption of robust climate policy. Some companies have obstructed progress directly by lobbying or indirectly through the funding of trade associations, think tanks, political advertising, and other methods. In addition to this destructive engagement, there has also been a lack of robust positive engagement from companies that support or would benefit from proposed policies. Until private sector actors stop blocking and start advocating for science-based policy, there will be little progress in addressing climate change in the United States.

How US Companies Can Become Effective Climate Policy Advocates

Despite Shared Membership, US Chamber of Commerce and Business Roundtable at Odds Over Climate Policy

How the Chamber of Commerce's Scorecard Elevates Climate Deniers

Corporate Lobbying on Climate Change: Silence is not Neutrality