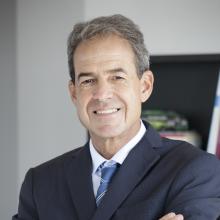 Prof. Luis Antonio Lindau, Ph.D., is the Director of WRI Brasil Ross Center for Sustainable Cities, where he leads and provides technical guidance to a team of professionals working for the implementation of projects under WRI Ross Center for Sustainable Cities’ strategy. He also provides input to worldwide outreach and activities as member of the WRI Ross Center’s executive team. In 2013, he was awarded the President Juscelino Kubischeck medal in recognition to the organization’s contribution to Bus Rapid Transit (BRT) development in the city of Belo Horizonte.

Prof. Lindau was one of the founders of ANPET, the Brazilian Association for Research and Education in Transport. He served as ANPET's president for two successive mandates (2002-2006). In 1995, he implemented LASTRAN, the Laboratory for Transport Systems of the School of Engineering at UFRGS, one of Brazil's top universities, where he lectured, coordinated research projects, and supervised thesis in transport engineering. He organized the 2000 edition of the PanAmerican Conference in Transport Engineering.

He also worked as a consultant for the Brazilian Agency for Urban Transport (EBTU) in the mid-1980s. EBTU coordinated the national and international actions that led to the implementation of high performance busways in several Brazilian cities. EBTU's successful model of centralizing the coordination and promotion of public transportation policies was later transferred to other countries in Latin America such as Mexico and Venezuela, where Prof. Lindau trained staff working for local authorities.

Prof. Lindau took post-doctorate leave at University College London, earned his Ph.D. in transportation from University of Southampton, and holds a bachelor's degree in Civil Engineering from UFRGS, Brazil. He is author of more than 200 book chapters and academic papers published in scientific journals and conference proceedings. He delivered more than one hundred speeches for the public and private sectors in Brazil and abroad on transit systems and performance, road safety, sustainable mobility and on the future of urban transport.