As Trump Steps Away from Paris Climate Agreement, U.S. States, Cities and Businesses Step Up

U.S. states, cities and businesses are an essential part of the response to the global climate crisis – and their role is ever more crucial as the Trump administration moves to pull the United States from the historic Paris Agreement.

The next step could come as soon as November 4, when the administration would finally be able to formally submit a request to withdraw from the Paris Agreement (while President Trump has signaled his intention of leaving the accord, the United States remains a party to it). Regardless of what the White House does, there is inspiring leadership in cities and states to accelerate climate action across the country.

In the two years since the current administration announced it would withdraw from the agreement, states, cities, businesses, universities, and others have joined coalitions supporting the Paris Agreement, including We Are Still In, the U.S. Climate Alliance, and Climate Mayors. Today, these subnational climate actors represent 65% of the U.S. population and 68% of the economy, according to the America’s Pledge Initiative.

The rise of these leaders tracks with a growing American consensus: 71% say they want the federal government to do more on climate change, while 67% say it will have a positive impact on the economy and jobs.

Most importantly, the growing momentum for climate action has brought an impressive array of new legislation and concrete measures that will be necessary to make good on aspirational climate pledges. Hawaii adopted the first full carbon neutrality target in 2015, and California, New York and Maine have recently followed. In all, 23 states and the District of Columbia now have mandates to reduce greenhouse gas emissions. These mandates are backed up by actions across economic sectors.

The Regional Greenhouse Gas Initiative (RGGI), which caps carbon dioxide emissions from power plants in nine northeastern states, is poised to grow. New Jersey will rejoin as the 10th state in January, and Virginia is expected to join in 2021. Pennsylvania’s governor recently signed an executive order to develop rules to join the initiative, which will make Pennsylvania the first major fossil-fuel producing state to join. To further accelerate the transition to cleaner energy, California, Nevada, Washington, Maine, New York, New Mexico, the District of Columbia and Puerto Rico have joined Hawaii in enacting 100% clean electricity legislation. Most of them have set their targets for 2040 to 2050, with preliminary targets along the way. Combined, they make up 16% of America’s electricity demand. Other states, including New Jersey, Vermont and Maryland, have set goals to reach 50% or more clean electricity by around 2030.

In the transportation sector, Colorado recently adopted California’s zero-emission vehicle (ZEV) mandate requiring automakers to achieve minimum levels of electric vehicle sales through 2025. With Minnesota and New Mexico also planning to join, 13 states representing over 30% of vehicle sales in the U.S. will have ZEV mandates. 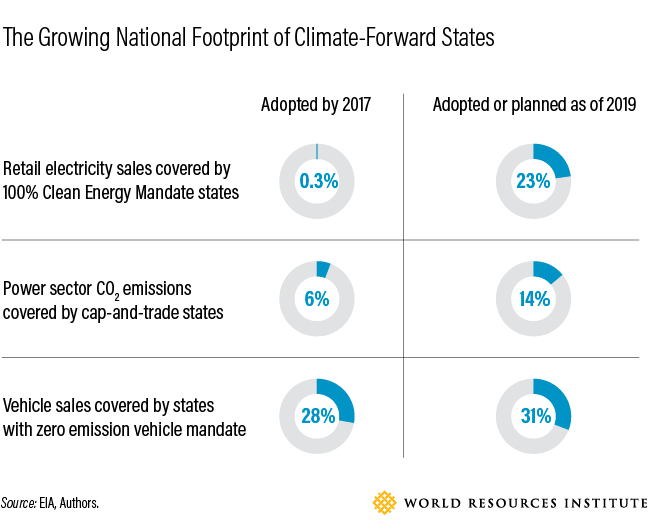 These state-level actions are reinforced by commitments from cities and businesses. According to a Sierra Club report, 138 cities have committed to 100% renewables — up from 58 cities in 2017 — including Chicago, Cleveland, Los Angeles, Minneapolis, Philadelphia and St. Louis. At least 43 electric utilities now have decarbonization goals as well. These include Xcel Energy — which aims to go 100% coal free by 2030 and 100% carbon free by 2050 — and National Grid, which aims to reduce emissions 80% by 2050. These two utilities alone serve over 5 million customers. The Climate Mayors Electric Vehicle Purchasing Collaborative, which will leverage the purchasing power of major cities across the U.S. to cut costs and eliminate barriers to electrify the public transit fleet, now has 157 cities, counties and other public entities as members. Since June 2017, 107 U.S. companies have set or have committed to set Science Based Targets to reduce their emissions in line with the Paris Agreement. 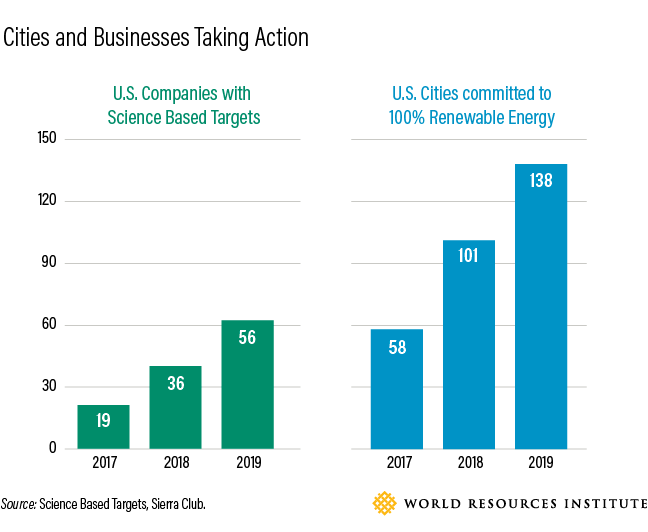 While these are all promising indicators, federal actions still threaten to hold the United States back. Since 2017, major regulations to limit emissions in key sectors of the economy have been dismantled, vacated or otherwise thrown into legal uncertainty. The ultimate impact of this backsliding will depend in part on how subnational actors are able to continue to build momentum and tip the scales, and when the federal government again recognizes the need to address the climate threat.

A case in point is what’s happening in California, where the state has been allowed to set vehicle emissions standards that are stricter than the nation’s, as allowed by the Clean Air Act. The current U.S. administration is trying to lower national standards and revoke California’s right to have its own. However, California and four major automakers representing 30% of U.S. market share have agreed on a deal to keep improving fuel economy; 15 states have now formally joined or have announced their intention to join California’s vehicle emissions standards. This is the type of cooperation the federal government should be supporting.

Similarly, while the courts have vacated Significant New Alternatives Program (SNAP) rules designed to move away from super-polluting hydrofluorocarbons used in refrigerants and industrial equipment, California, Vermont and Washington state have adopted measures to backstop these rules within their own jurisdictions. New York, Maryland, Connecticut and Delaware have announced they plan to adopt similar measures.

These moves are making a real dent in emissions and compensating — to a degree — for federal backsliding on climate. However, to truly tackle the climate challenge, the federal government and subnational actors will need to work in harmony to promote clean energy and reduce greenhouse gas emissions. Instead of withdrawing from the Paris Agreement, the United States should be recommitting to international climate efforts and building on the promising steps taken by states, cities, and businesses across the country.

The America’s Pledge Initiative will release new research at this December’s COP25 international climate meeting to show how a re-committed federal government after 2020, building on what subnational actors have done, could get the United States back on track to meet the long-term goals of the Paris Agreement.