By the Numbers: America’s Pledge Shows How US Is Taking Climate Action Without Trump

Even after President Trump announced his intention to pull the United States out of the Paris Agreement, much of the country is moving forward with climate action anyway. According to new analysis, more than 2,500 non-federal actors representing more than half the U.S. economy—including cities, counties, states, businesses and more—have pledged their support for the Paris Agreement goals. If these actors were their own country, they’d be the world’s third-largest economy. 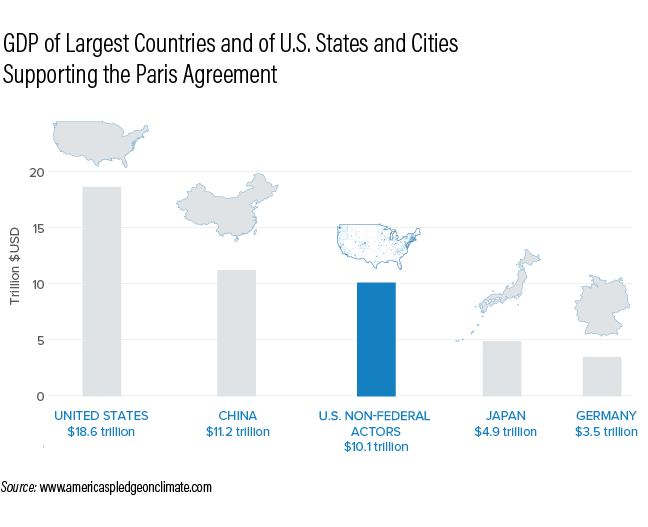 This research is presented in a report by America’s Pledge, a new initiative led by California Governor Jerry Brown and UN Special Envoy on Cities and Climate Michael Bloomberg to quantify the climate actions and recent commitments from non-federal actors. WRI, along with the Rocky Mountain Institute and CDP, conducted the analysis for the Phase 1 America’s Pledge Report released at COP23 in Bonn, Germany. 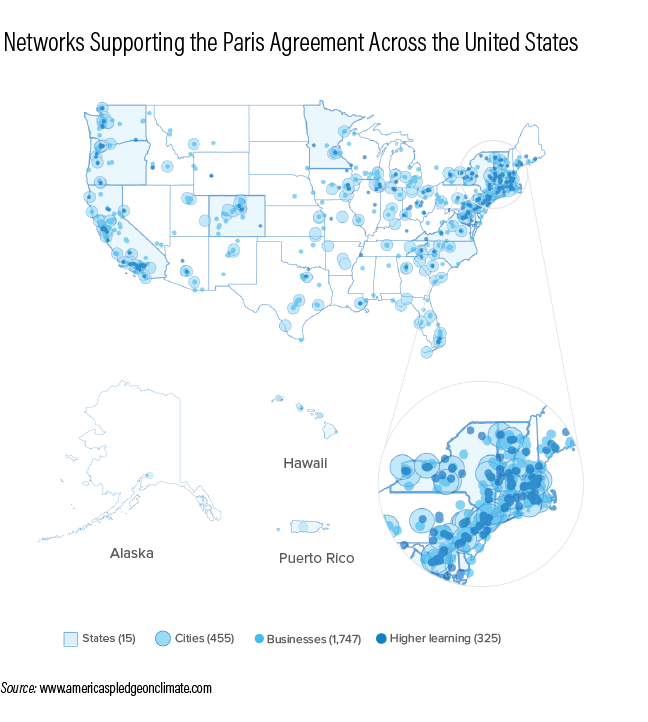 Here are some other key findings on the progression of U.S. climate action:

In addition to the 10 states with cap-and-trade programs and 96 U.S. businesses using internal carbon prices, our analysis shows that non-federal actors are already reducing emissions from major sectors. For example:

The Low-carbon Transition Is Taking Off in Several Key Sectors

Cleaner energy and electric transportation are emerging as not just emissions-reduction leaders, but cost-savings leaders as well. Within the electricity sector, coal is no longer competitive with cheaper renewable energy and natural gas, thanks to state-level clean energy mandates, declining clean technology costs, low-cost and cleaner-burning natural gas, citizen mobilization against dirty power plants and Congressionally approved renewable tax credits. For example, in August 2017, the Department of Energy announced that its “SunShot” target to make solar power cost competitive with conventional forms of energy had been met three years early.

Within the buildings sector, energy efficiency gains have outpaced most official projections: Since 2005, the EIA’s estimate for 2025 total energy use by U.S. buildings has dropped by more than 20 percent.  The transportation sector has overtaken electricity as the largest source of U.S. emissions, but is also potentially on the cusp of major change. For example, electric vehicles are widely anticipated to be less expensive and have lower lifetime costs than conventional vehicles by 2025-29.

Falling clean technology prices, emerging innovations, and actions by states, cities and businesses have helped reduce U.S. net greenhouse gas emissions by 11.5 percent between 2005 and 2015, while the economy grew by 15 percent over that period. This has allowed states, businesses and cities to take on steeper emissions-reduction targets and accelerated renewable energy commitments. For example, nine Northeastern states have implemented the Regional Greenhouse Gas Initiative (RGGI) to create a market-based system that reduces electric sector emissions 2.5 percent a year through 2020. RGGI has reduced power sector CO2 emissions more than 45 percent since 2005 while the region’s per-capita GDP continued to grow. In August, RGGI announced that it will accelerate emissions reductions over the next decade to provide an additional 30 percent cap on 2030 power sector emissions, compared to 2020 levels.

Across the United States, governors, mayors and business leaders are acting to fill the climate action void created by current federal climate policies. With public support and effective collaboration, they can drive U.S. climate action forward.

These efforts, however, must accelerate. Sustained action by states, cities and businesses can help maintain momentum going forward and lay the foundation for future re-engagement by the federal government after 2020.

In its next phase of work, the America’s Pledge initiative will aggregate and quantify the full range of potential U.S. non-federal actions, including how they affect our ability to reach the U.S. emissions-reduction target. In the meantime, expect to see more and more non-federal actors stepping up for climate action.

4 Opportunities for U.S. States, Cities and Businesses to Step Up for America’s Pledge

U.S. States, Cities and Businesses Are Cutting Emissions, and Poised to Do Even More. New Report Does the Math