In late March, Russia released its draft long-term strategy for diversifying economic development and reducing greenhouse gas emissions by 2050. Given Russia's role in the global economy and its status as the fourth-largest emitter of greenhouse gases, the country's long-term plan is consequential for the world's efforts to rapidly cut emissions and avoid the worst consequences of climate change. Unfortunately, this plan misses the mark, allowing emissions to creep upwards through 2030 and not drop to net-zero until as late as 80 years from now. This also means missing out on the economic opportunities presented by the transition toward a low-emissions economy, including growing the renewable energy sector.

Russia models four long-term pathways or scenarios in the draft strategy, two of which are focused explicitly on low-carbon development. Even under the most ambitious scenario in the strategy, Russia will only reach carbon neutrality "close to the completion" of the century. This will be decades later than other major economies, which have laws in place to reach net-zero by 2050 (the United Kingdom, France, Denmark and New Zealand) or sooner (Sweden is committed to reach net zero by 2045).

Here are three takeaways from the draft strategy:

1. Russia's Projected Emissions in 2030 and 2050 are Higher than Current Levels in All Scenarios

The "base" scenario is the main scenario guiding Russia's proposed long-term strategy. It involves continuing current climate measures through 2028, followed by more aggressive policies between 2028-2050, predominantly focused on energy and resource efficiency, as well as strengthening forest protection. An "intensive" scenario focuses on additional measures, including carbon pricing, increased renewable energy generation and large-scale electrification of transport, among others. The other two pathways are less ambitious than the base scenario — one excludes measures that are currently under implementation (the "without government measures" scenario) and another includes current measures through 2028 but doesn't build on them (the "inertia" scenario). 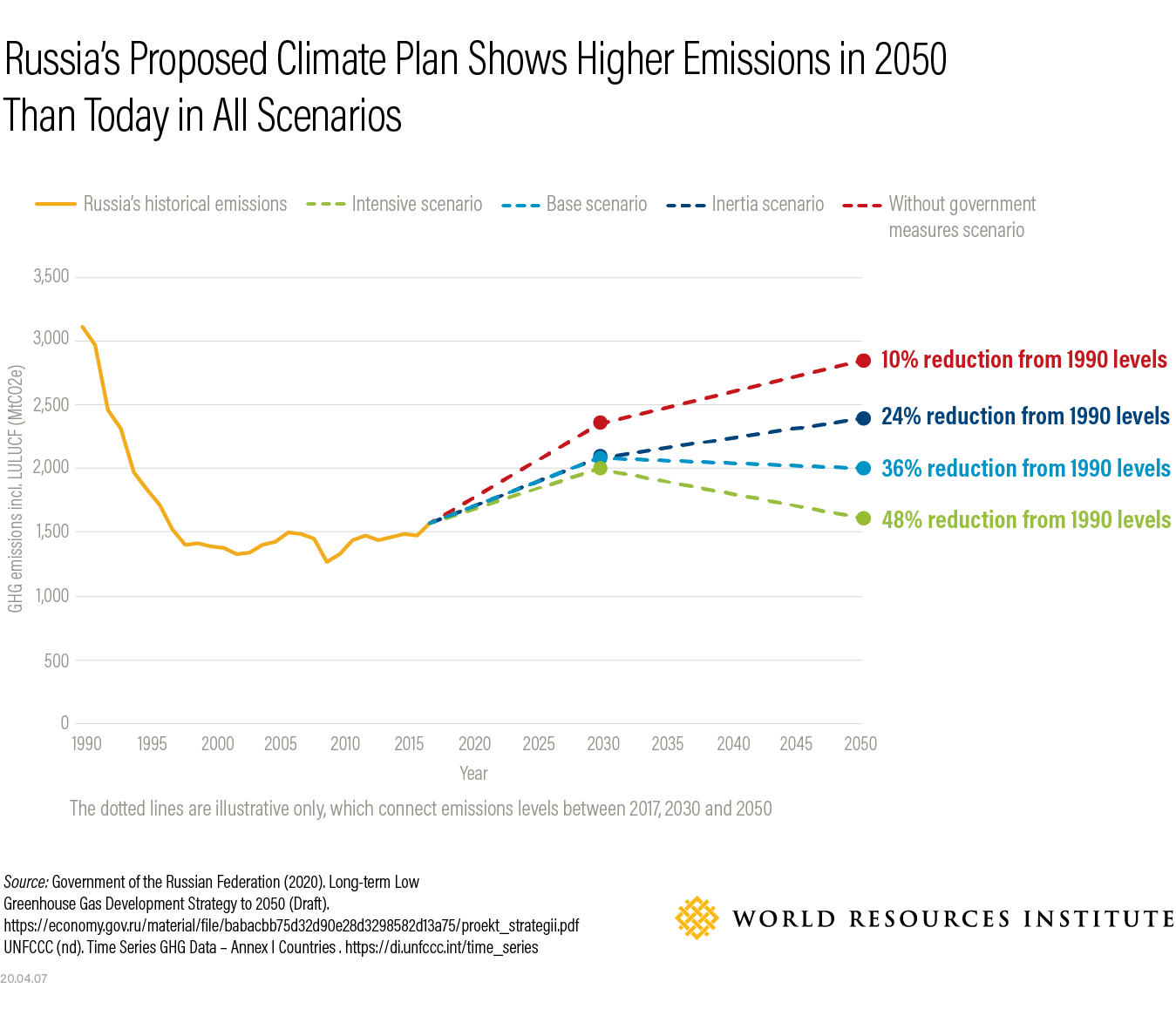 According to the latest climate science, global carbon dioxide emissions must roughly halve by 2030 and reach net-zero around 2050 in order to limit warming to 1.5 degrees C (2.7 degrees F) and prevent the worst impacts of climate change. None of Russia's scenarios come close to aligning with this trajectory.

Russia's electricity mix is dominated by fossil fuels, with carbon-free energy sources providing 36% of the nation's electricity (mainly nuclear and hydropower). Other forms of renewable energy, like wind, solar, geothermal and bioenergy, currently provide less than 0.1%. For comparison, the share of renewables in the electricity mix in 2015 was 74% in Brazil (including large-scale hydropower), 24% in China, 15% in India and 2% in South Africa.

Russia's draft strategy does not foresee much change in its electricity mix through mid-century in the base scenario. Fossil fuels would continue to play a leading role, with carbon-free energy accounting for only 43% of the electricity mix in 2050. This is in stark contrast with the scale of renewable energy needed in the global electricity mix to limit warming to 1.5 degrees Celsius, around 70–85% by 2050.

But Russia has significant potential to grow its renewable energy sector, which comes with broader economic and societal benefits. As acknowledged by its proposed strategy, developing renewable energy in all areas suitable could provide five times the amount of electricity currently needed. Increasing the share of renewables in the electricity mix to 30% by 2030 would save Russia up to $8 billion per year when factoring in benefits to human health. This would also include 1.1 million total jobs in the renewable sector by 2030. (Russia's hydropower sector currently employs 65,000 people, ranking the country fifth in the world for jobs in this industry.)

Because of its northern latitude, Russia is feeling the heat from a warming world far more than almost any other nation, warming 2.5 times faster than the global average. Russia's strategy makes the case that a warming climate presents some opportunities for the country, such as longer ice-free periods to navigate the Arctic Ocean, warmer winters (and consequently, reduced energy consumption), and increased crop production. The strategy also notes, however, that Russia's high proportion of degraded land, lower soil fertility and lagging agricultural technology could keep farming opportunities from coming to fruition.  The country faces significant risks from climate change, which the new strategy does acknowledge. These include increased risks of fires and melting permafrost. Russia's government auditors estimate that the country's wildfires between 2016 and 2018, which burned 15.7 million hectares, caused damages equivalent to $900 million (68.9 billion rubles). And thawing permafrost creates ground instability, which can cause significant damage to buildings, pipelines and other infrastructure.

Russia's trade is also particularly exposed as a result of the global shift toward low-carbon development. The country is currently the world's largest exporter of fossil fuels. In 2018, Russia supplied Europe with 41% of its natural gas imports. But the European Union is aiming to reach climate neutrality by 2050, a target that will be difficult, if not impossible, to reach at its current levels of fossil fuel consumption. Cultivating newer, green industries could help Russia diversify its trade and create longer-term economic security.

It is encouraging that Russia is following eight other G20 countries in preparing to submit a long-term strategy this year, in line with the Paris Agreement's invitation to do so. Yet both Russia's 2030 and 2050 goals fall well short of what major economies must deliver to limit warming to 1.5 or even 2 degrees C, and are incongruent with the ambitions of many G20 peers. Now is the time for Russia to strengthen these targets to match the scale and pace of the climate crisis, and seize the economic opportunities from a low-emissions and climate-resilient economy.