Editor's Note: This blog was updated on August 12, 2020 to include WRI's recent paper on designing and communicating net-zero targets. You can read the paper here.

The latest research is clear: To avoid the worst climate impacts, global greenhouse gas (GHG) emissions will need to drop by half by 2030 and reach net-zero around mid-century.

Recognizing this urgency, an unprecedented number of business and local government leaders are supporting strong national climate ambition through the U.N. High Level Climate Champions’ Race to Zero campaign. The global initiative sets minimum criteria for designing net-zero targets, asking regions, cities, businesses, investors and civil society to pledge to reach net-zero emissions by 2050 and submit a plan in advance of the next U.N. Climate Summit in 2021. This comes on the heels of the U.N. Secretary General asking countries to come forward with net-zero targets. In addition, a growing number of countries have joined the Climate Ambition Alliance with aspirations to reach net-zero emissions.

Here we explore what a net-zero target means, explain the science behind net-zero, and discuss which countries have already made such commitments.

1. What Does It Mean to Reach Net-Zero Emissions?

We will achieve net-zero emissions when any remaining human-caused GHG emissions are balanced out by removing GHGs from the atmosphere in a process known as carbon removal.

First and foremost, human-caused emissions — like those from fossil-fueled vehicles and factories — should be reduced as close to zero as possible. Any remaining GHGs would be balanced with an equivalent amount of carbon removal, for example by restoring forests or through direct air capture and storage (DACS) technology. The concept of net-zero emissions is akin to "climate neutrality."

2. When Does the World Need to Reach Net-Zero Emissions?

Under the Paris Agreement, countries agreed to limit warming well below 2 degrees C (3.6 degrees F) and ideally 1.5 degrees C (2.7 degrees F). Climate impacts that are already unfolding around the world, even with only 1.1 degrees C (2 degrees F) of warming — from melting ice to devastating heat waves and more intense storms — show the urgency of minimizing temperature increase to no more than 1.5 degrees C. The latest science suggests that to meet the Paris Agreement's temperature goals, the world will need to reach net-zero emissions on the following timelines: 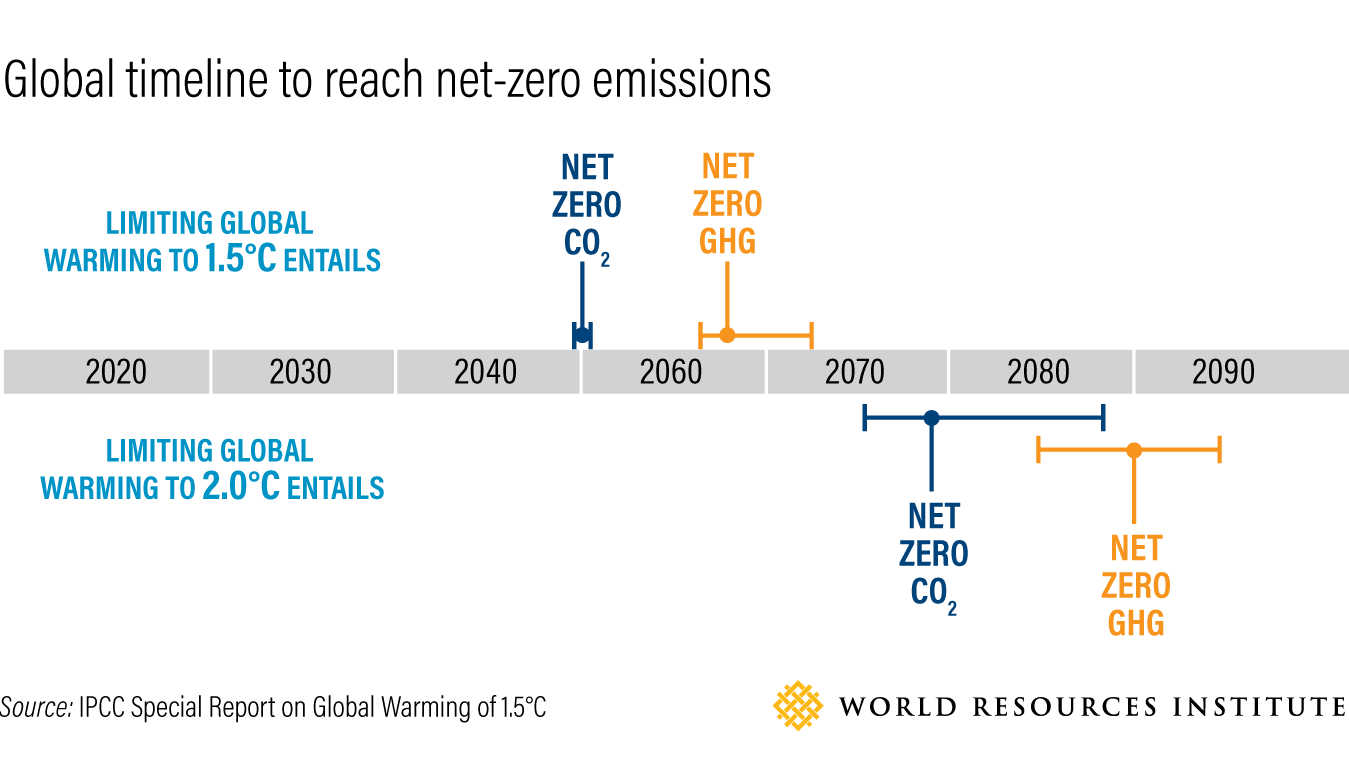 The Special Report on Global Warming of 1.5˚C, from the Intergovernmental Panel on Climate Change (IPCC), finds that if the world reaches net-zero emissions one decade sooner, by 2040, the chance of limiting warming to 1.5 degrees C is considerably higher. The sooner emissions peak, and the lower they are at that point, the more realistic it is that we achieve net-zero in time. We would also need to rely less on carbon removal in the second half of the century.

Importantly, the time frame for reaching net-zero emissions differs significantly if one is referring to CO2 alone, or referring to all major GHGs (including methane, nitrous oxide, and "F gases" such as hydrofluorocarbons, commonly known as HFCs). For non-CO2 emissions, the net-zero date is later because some of these emissions — such as methane from agricultural sources — are somewhat more difficult to phase out. However, these potent but short-lived gases will drive temperatures higher in the near-term, potentially pushing temperature change past the 1.5 degrees C threshold much earlier.

Because of this, it's important for countries to specify whether their net-zero targets cover only CO2 or all major GHGs. A comprehensive net-zero emissions target would include all major GHGs, ensuring that non-CO2 gases are also reduced.

3. Do All Countries Need to Reach Net-Zero at the Same Time?

The timelines above are global averages. Because countries' economies and stages of development vary widely, there is no one-size-fits-all timeline for individual countries. There are, however, hard physical limits to the total emissions the atmosphere can support while limiting global temperature increase to the agreed goals of the Paris Agreement. At the very least, major emitters (such as the United States, the European Union and China) should reach net-zero GHG emissions by 2050, or it will be hard for the math to work regardless of what other countries do. Ideally, major emitters will reach net-zero much earlier, given that the largest economies play an outsize role in determining the trajectory of global emissions.

4. How Many Countries Have Net-Zero Targets?

This list only includes countries that adopted a net-zero target in law or another policy document. This does not include targets in political speeches, such as China’s noteworthy announcement. The Energy and Intelligence Climate Unit maintains an updated list of net-zero announcements here. As of June 2020, 120 countries are committed to working on net-zero targets through the Climate Ambition Alliance, including all least-developed countries and a handful of high-emitting countries. However, only around 10% of global emissions are covered by some form of an adopted net-zero target. Some net-zero targets have been incorporated directly into countries' commitments under the Paris Agreement. 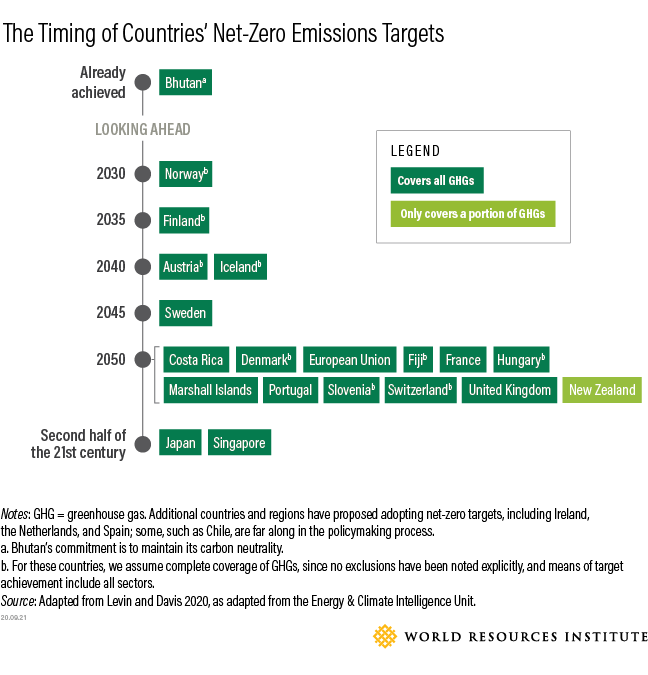 5. How Do We Achieve Net-Zero Emissions?

Policy, technology and behavior need to shift across the board. For example, in pathways to 1.5 degrees C, renewables are projected to supply 70-85% of electricity by 2050. Energy efficiency and fuel-switching measures are critical for transportation. Improving the efficiency of food production, changing dietary choices, halting deforestation, restoring degraded lands, and reducing food loss and waste also have significant potential to reduce emissions. It is critical that the structural and economic transition necessary to limit warming to 1.5 degrees C is approached in a just manner, especially for workers tied to high-carbon industries. The good news is that most of the technologies we need are available and they are increasingly cost-competitive with high-carbon alternatives. Solar and wind now provide the cheapest power for 67% of the world. Markets are waking up to these opportunities and to the risks of a high-carbon economy, and shifting accordingly.

Additionally, investments will need to be made in carbon removal. The different pathways assessed by the IPCC to achieve 1.5 degrees C rely on different levels of carbon removal, but all rely on it to some extent. Removing CO2 from the atmosphere will be necessary to compensate for emissions from sectors in which reaching zero emissions is more difficult, such as aviation. Carbon removal can be achieved by several means, including land-based approaches (such as restoring forests and boosting soil uptake of carbon) and technological approaches (such as direct air capture and storage, or mineralization). 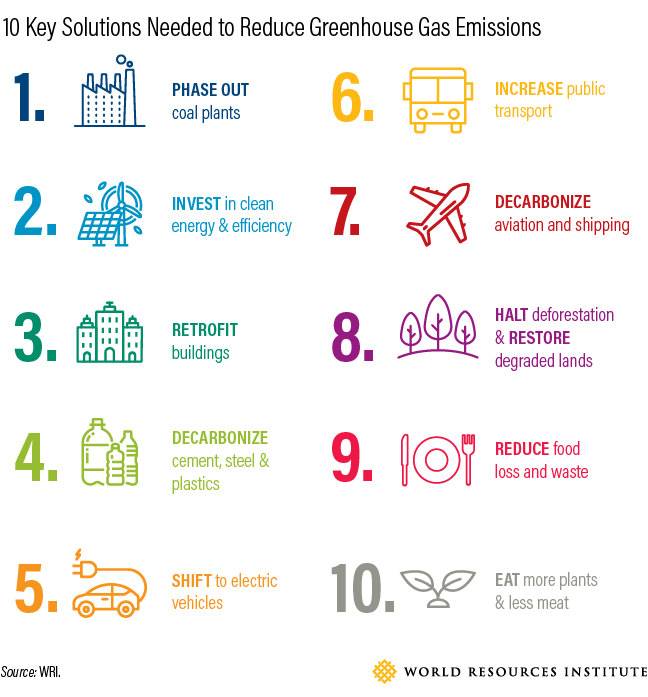 6. Does the Paris Agreement Commit Countries to Achieving Net-Zero Emissions?

The Paris Agreement has a long-term goal of achieving "a balance between anthropogenic emissions by sources and removals by sinks of greenhouse gases in the second half of this century , on the basis of equity, and in the context of sustainable development and efforts to eradicate poverty." The concept of balancing emissions and removals is akin to reaching net-zero emissions.

Coupled with the ultimate goal to limit warming well below 2 degrees C, and aiming for 1.5 degrees C, the Paris Agreement commits governments to sharply reduce emissions and ramp up efforts to reach net-zero emissions in time to avoid the worst consequences of climate change. The Paris Agreement framework also invites countries to submit long-term, low-emissions development strategies by 2020. These strategies can be a vehicle for setting net-zero targets and chart how countries aim to make such transitions.

Commitments to create bold short- and long-term targets that align with a net-zero emissions future would send important signals to all levels of government, to the private sector, and to the public that leaders are betting on a safe and prosperous future, rather than one devastated by climate impacts.