Japan officially submitted its new climate action plan late last week, and it falls short of what many had hoped for.

The country committed to reduce its emissions 26 percent below 2013 levels by 2030, one of the least aggressive targets of any developed country to date. Research shows that the country could go much further, reducing its emissions 31 percent below 2013 levels through additional investments in renewable energy and efficiency even without nuclear power; 37 percent if it also brings some nuclear plants back online, as the government has indicated it intends to do.

One of the world’s largest emitters, Japan joins the growing list of countries putting forward post-2020 climate commitments, or “intended nationally determined contributions” (INDCs), which will form the basis of a new global climate agreement to be reached in Paris this December.

Here’s a closer look at the highs and lows of Japan’s new climate commitment.

Japan’s target uses 2013 as its base year, in contrast to most other developed countries, which have selected 1990 or 2005. (Japan’s 2013 emissions were slightly higher than its 2005 emissions.) Japan’s reduction target is equivalent to 18 percent below 1990 levels, in contrast to the European Union’s 40 percent pledge; or 25.4 percent below 2005 levels, the least aggressive target to date, according to this measure, except for that of the Russian Federation. 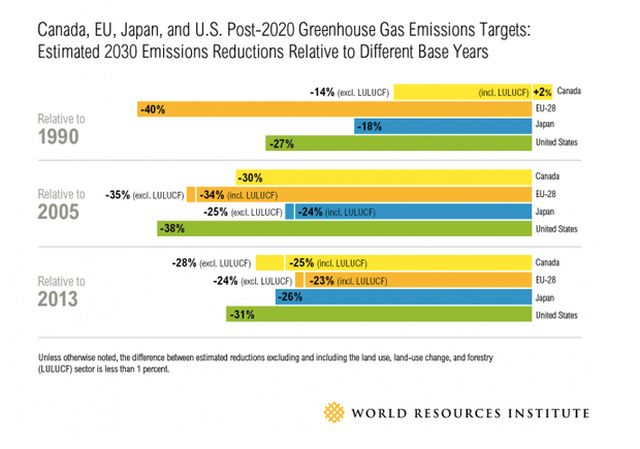 In contrast to the limited ambition of its INDC, the Japanese Cabinet has committed to an impressive long-term target to reduce the country’s emissions 80 percent below 1990 levels by 2050. The average rate of reductions implied by the INDC, however, are not fully consistent with those needed to meet the 2050 target – a linear path to the 2050 target would imply at least 30 percent below 2013 levels by 2030. Failure to achieve this rate of reduction by 2030 will necessitate steeper reductions later in order to achieve the 2050 target. Unless Japan stems its investments in long-lived coal-fired power plants, it’s unclear that such reductions will become more economical later.

Japan also plans to purchase some of its reductions from developing countries through its Joint Crediting Mechanism. The INDC indicates that these purchases will be counted towards Japan’s target, in which case domestic emissions may not be cut by as much as the INDC target suggests. Moreover, without robust accounting measures at the international level, those reductions may be “double counted” by the developing countries from which credits are purchased, weakening global ambition.

According to the INDC, 56 percent of Japan’s energy will still be supplied by fossil fuels in 2030, while 20-22 percent will come from nuclear and 22-24 percent from renewables. This target is out of step with the recent G7 pledge to decarbonize the global economy this century.

Japan’s demand for imported fossil fuels has grown to make up for nuclear power plants that the country phased out after the Fukushima disaster. However, studies show that more ambitious renewable targets in the absence of nuclear power are not only achievable, but beneficial.

New Climate Institute research estimates that if Japan used 100 percent renewable energy, by 2050 the country could save 15,000 lives from reduced air pollution, create 67,000 jobs and save $25 billion annually by reducing needs for imported oil, natural gas and coal.

Leaders in Japanese industry have recognized these benefits. The Japan Climate Leaders’ Partnership (Japan-CLP), a corporate network, has called for more ambitious reduction targets of at least 30 percent below 2005 levels. The group submitted detailed target and policy recommendations to Japanese decision makers, urging government to set more ambitious targets, promoting carbon pricing measures, and recognizing the role and responsibility of private sector in “the development of a low-carbon society.”

A Mixed Bag for Transparency

Despite its relative lack of ambition, Japan’s INDC is reasonably clear and transparent about how it set and intends to achieve it emissions-reduction target, laying out key details like the reference point, time frames for implementation, scope and coverage, planning processes and assumptions.

Nonetheless, there is room for improvement on transparency. In particular, the INDC would benefit from further details on the use of international market mechanisms, such as whether there is any limit in applying emissions reductions achieved overseas toward its target, and how to avoid double counting those reductions towards targets by multiple countries. Clarification on the accounting approach and method for the land sector would further strengthen the INDC.

Little Action from a Major Emitter

With its INDC, Japan had the opportunity to show the world that it could transcend the challenge presented by the Fukushima disaster and transition to a truly sustainable energy sector, creating jobs and securing a position of international leadership in the process. The INDC submitted last week falls short of Japan’s potential.

There’s still time for Japan to step up in advance of the December climate summit. By setting a more ambitious target, Japan can get back on track to fulfill its commitment in achieving a low-carbon economy in the long-term.

Japan Can Go Much Further than its Rumored Emissions-Reduction Target