The United States is grappling with serious economic and environmental challenges – from sluggish economic growth to rising greenhouse gas emissions and escalating impacts of climate change. Policymakers have traditionally addressed these challenges separately, but there’s one policy that can address them together—a carbon price.

WRI’s new paper, Putting a Price on Carbon: A Handbook for U.S. Policymakers, is the first in a series examining the concept of making emitters pay for the carbon pollution they produce. As the title suggests, the Handbook sets out the lay of the land around the different carbon-pricing models—such as cap-and-trade and carbon taxes—and can be used as a “how-to” guide for what to consider when designing a carbon-pricing policy.

It’s important to reignite a national conversation on this topic—for the good of the planet and the economy. 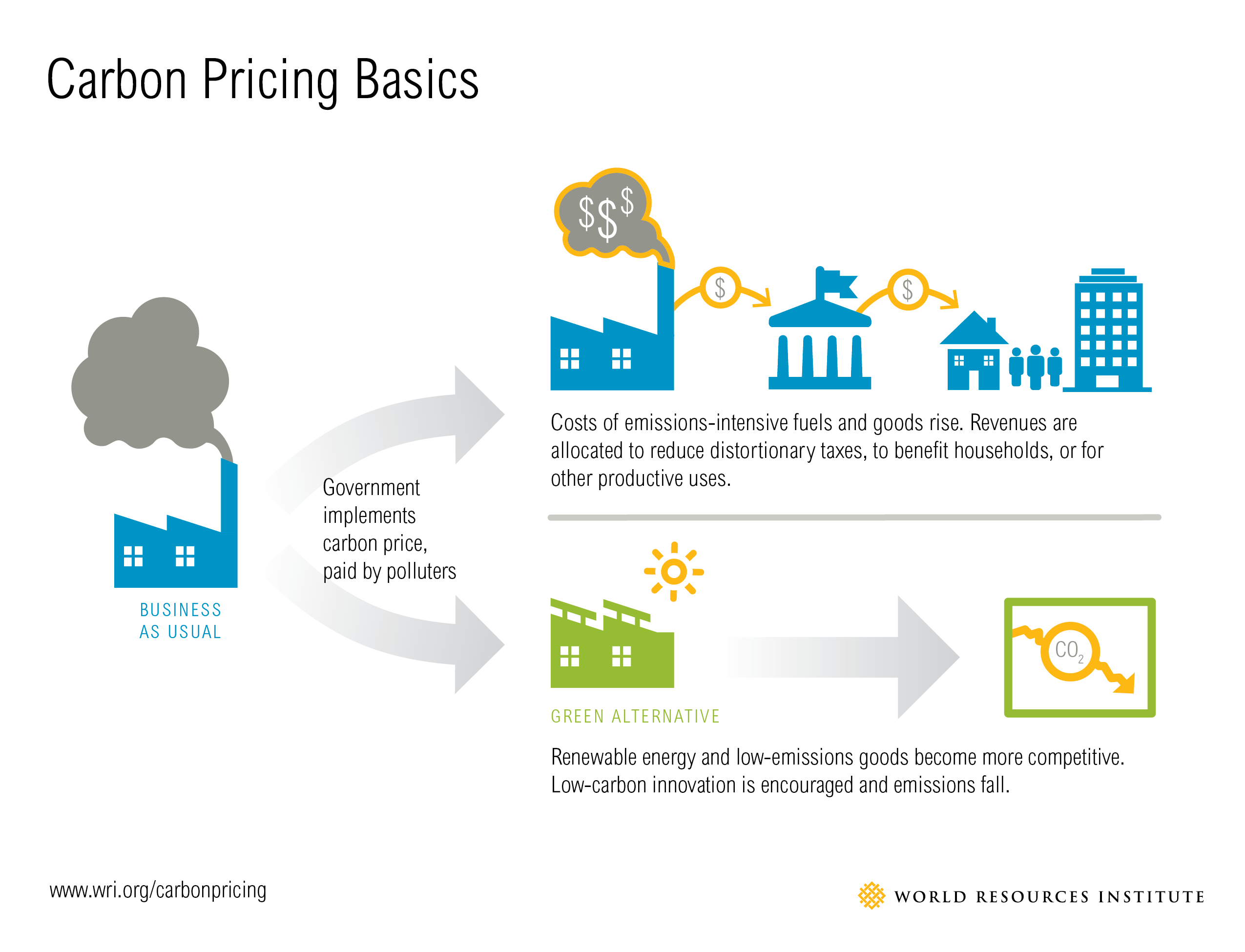 Carbon Pricing Can Rein in Emissions

It’s been nearly six years since comprehensive climate legislation passed either house of Congress. In the absence of Congressional action, the Obama administration has proposed a number of measures to reduce greenhouse gas emissions across the economy. While WRI analysis shows that these measures can help the United States meet its near- and medium-term climate goals, existing legal authorities are insufficient for meeting long-term emissions-reduction targets. A policy that puts a price on greenhouse gas emissions could be just the ticket.

We’ve already seen the climate benefits carbon pricing yields at the local level and internationally. Nine northeastern states have participated in a power sector cap-and-trade program since 2009, and California’s economy-wide cap-and-trade program went into effect in 2012. Globally, almost 40 countries and more than 26 sub-national jurisdictions have implemented carbon-pricing programs that cover approximately 12 percent of global greenhouse gas emissions, some of which have been in effect for more than 20 years. One of those early adopters, Denmark, has seen its emissions fall by nearly 33 percent since 1990. 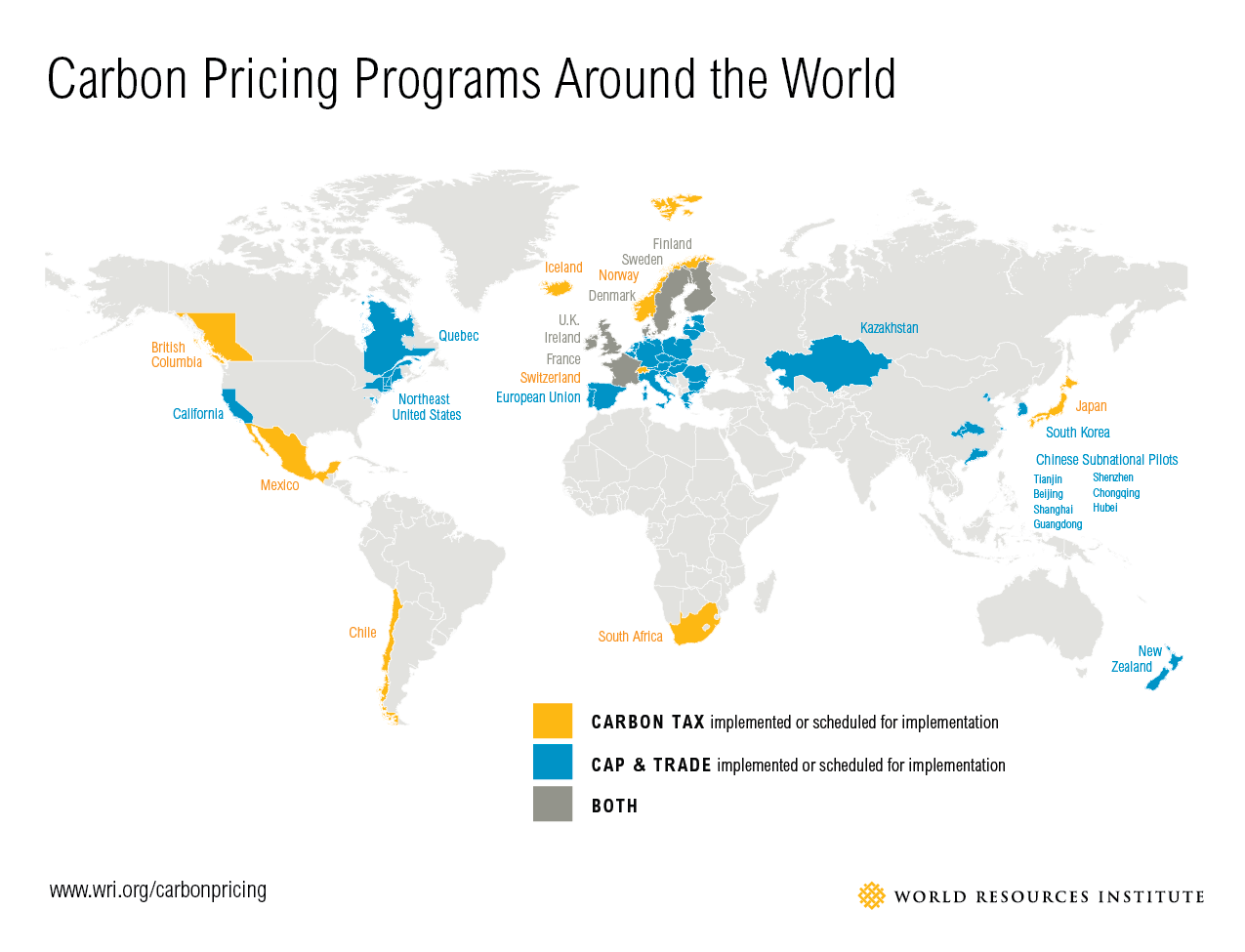 But carbon pricing policies are about more than just the climate – they’re economic policies as well.

When the price of carbon-intensive fuels and goods increases, the government takes in new revenues, which it can put to use in any number of productive ways. In this way, a carbon price can achieve several policy goals simultaneously.

For example, politicians from across the political spectrum support comprehensive tax reform. A carbon-pricing policy would provide the opportunity to reduce taxes on things we want to encourage (such as work and investment) by discouraging things we want less of (greenhouse gas emissions). It’s no wonder that such a win-win opportunity has the support of an overwhelming majority of economists, the American public and residents of British Columbia, where that policy was put in place seven years ago. As a result of the revenue-neutral tax swap it implemented, the province used carbon tax revenue to reduce other taxes. It now has the lowest personal income tax rates in Canada and one of the lowest corporate income tax rates in North America.

Deficit reduction is another priority of Democrats and Republicans alike, and carbon pricing revenues can be used to pay down the federal debt. Others support simply returning all of the revenues to consumers in the form of lump-sum dividends. This would ensure minimal government involvement and that lower-income households are not negatively affected. While the carbon price itself would spur innovation in clean energy technologies, the government can enhance that incentive by using revenue to support research and development – a proposal that has polled well among the American public. Of course, policymakers could decide to mix and match among these options, as well as others that are discussed in more detail in the Handbook.

Moving Toward a Low-Carbon Economy

Research shows that curbing climate change and growing the economy can and must go hand-in-hand. A well-designed carbon price can help the United States achieve its climate goals while improving economic efficiency and fostering growth.

In the coming months, we will publish a series of issue briefs that dive more deeply into some of the many issues that arise when putting a price on carbon. We hope to help reignite a national conversation that’s lain dormant for too long—one that focuses on the convergence of climate and economic policy.