New research out of the London School of Economics should wake up many in the food industry.

In a first-of-its-kind experiment, Linda Bacon, a graduate student in behavioral science and former global strategy director at Mars, Inc., tested whether placing plant-based dishes in a separate vegetarian section on restaurant menus influenced ordering. The study’s findings have important implications for how the food industry might move more people to eat healthier and more sustainably, and may just change how we talk about plant-based foods.

As director of WRI’s Better Buying Lab, Daniel Vennard advised the study. The Lab brings together the brightest minds from consumer research, behavioral economics and marketing strategy – along with companies like Sodexo, Panera Bread and Hilton – to research, test and scale strategies that help consumers buy sustainable foods. They work together to solve problems like the one Bacon is working on: finding strategies that will shift diets to more sustainable options. He spoke with Bacon about her findings and what’s needed next.

Daniel Vennard (DV): We know that many people want to eat food that’s good for the environment, but people’s consumption of plant-based foods – typically the most sustainable food type – is relatively low. Why is this?

Linda Bacon (LB): Having spent 25 years in the food industry, I can tell you that, despite our very best intentions, as consumers we don’t always make the buying decisions we wish we would. Our brains are often too busy or distracted to fully evaluate what we should eat. We can be unconsciously influenced by many factors, including what we notice first, how attractively a product is described or displayed and social norms. The environment around us can have a real impact on our behavior.

Understanding that, I wanted to determine if current positioning of plant-based foods as “vegetarian” on menus helps or hinders the ordering of these dishes.

DV: How was the study set up, and what did you find?

LB: We took a menu that contained eight main course dishes, of which two were plant-based: risotto primavera and ricotta and spinach ravioli. We created four different versions of the menu and tested them on 750 adults in the United Kingdom who usually eat meat and/or fish. Using an online survey, each person was shown one menu version, allocated at random, and asked to choose what dish they would select if they were in a restaurant having dinner with friends. 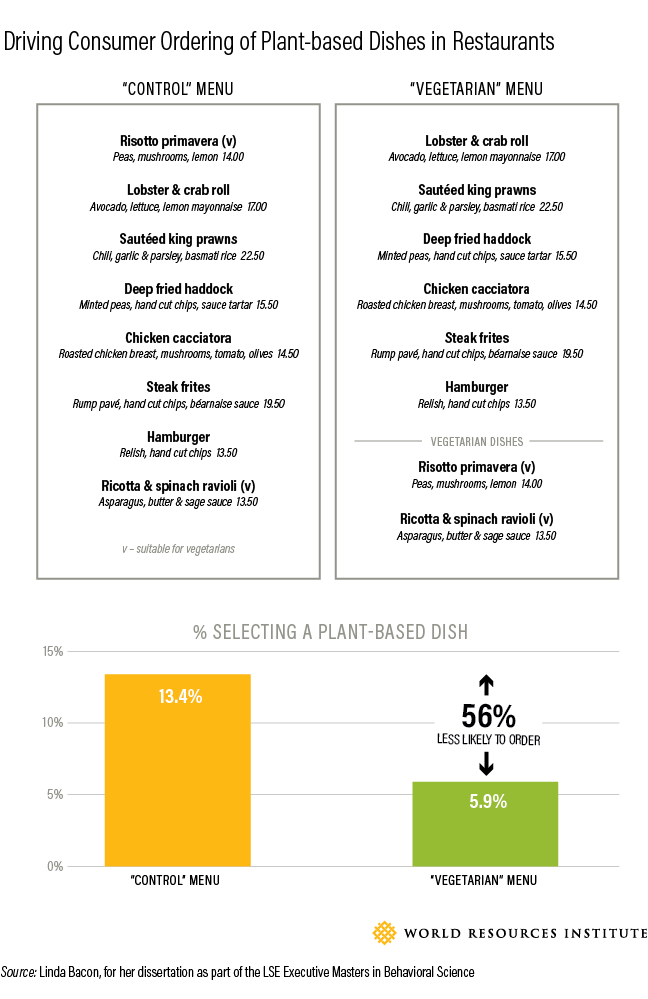 DV: What is it about the term vegetarian that could have reduced preference?

LB: The problem with putting some dishes into a separate vegetarian section of the menu is that it highlights the lack of meat or fish, and makes these choices look exclusive to a certain group. Our study’s participants may have seen this section of the menu and automatically thought it wasn’t relevant to them. Those who don’t identify as vegetarian, which is most people, might see a vegetarian section as for someone else and ignore the dishes listed there.

Having a vegetarian menu section may also prime people with negative associations about vegetarian food. For example, some people may think it is less tasty or nutritious, and men may be influenced by the association between meat-eating and masculinity.

DV: What else did this study reveal?

During the experiment, we also tested, using the same methodology, the impact of putting one of the plant-based dishes in a “Chef’s Recommendation” box. This didn’t have any effect overall. However, amongst those who eat meat and fish most often, we did see a significant increase in the proportion of people choosing a plant-based dish from this menu.

We also tested the use of certain descriptive language for plant-based dishes, such as “fresh” and “seasonal.” The initial insights from this show limited impact; however, the range of language tested was quite small, and it was possibly the wrong language. Other researchers have found that descriptive language can have an important impact. Ultimately, we need more research.

DV: Your research is just a start. What must happen next to fully understand consumer behavior when it comes to plant-based foods?

LB: Right, this is just one study and its findings are preliminary. While it gives some important insights, they aren’t full conclusions yet. The next step is field testing, where consumers are engaged inside restaurants, canteens and dining halls. This should look at whether the impact of vegetarian naming and boxes translates into a real-world environment, and whether alternative ways of referencing vegetarian foods – such as a logo or stamp – have similar impacts. We also need more testing of alternative language to see if there is framing that can drive increased preference.

There is a lot of research which shows that factors in our environment can influence our food decisions not only in restaurants, but in grocery stores, offices, schools and homes. We have the opportunity to expand this thinking beyond just restaurants.

DV: What impact do you think this research might have?

LB: Given just how many real-world menus currently separate vegetarian dishes, there is a real opportunity to increase sales of these foods and have a positive impact on the planet. How we see and talk about plant-based foods is ripe for innovation, and it’s potentially a cost-effective way of driving demand. It’s important, however, as we go through this research, that we figure out a solution that works for meat and non-meat eaters. Vegetarians are an important consumer group, too.

Linda Bacon’s research was undertaken for her dissertation as part of the LSE Executive Masters in Behavioral Science.

The Better Buying Lab has partnered with Yale University and the Behavioral Insights Team to build on this online testing of menus, and lead field tests in our partners’ restaurants and canteens. Our aim is to create a lexicon that the food industry can use to describe plant-based foods and their benefits in a way that appeals to mainstream consumers. Learn more about the Better Buying Lab’s work on language and how to shift more people to sustainable diets.