Climate Plans in the Lead-up to Paris: Where Do We Stand?

Halfway through the year in which the world is slated to adopt a new international climate agreement, countries responsible for more than half of global greenhouse gas emissions have now released their post-2020 climate action plans. The rest of the world’s nations are expected to submit their own plans, or “intended nationally determined contributions” (INDCs) between now and December, with many expected before October 1st.

So the big questions are: How do these INDCs stack up, and what impact will they have in reining in climate change?

We’ve been tracking INDCs as they come in, attempting to understand what they mean for the Paris negotiations, and evaluating whether they are transparent enough to allow us to gauge global progress on climate action. Here’s a comprehensive look at progress so far on mitigation, equity and transparency. A separate blog post takes stock of progress on adaptation.

A goal for mitigating greenhouse gas (GHG) emissions has been a centerpiece of all INDCs submitted. So far, all countries have set some kind of GHG target, with others also submitting non-GHG targets—for example, goals to increase renewable energy. This in itself represents progress since countries released their pre-2020 climate plans five years ago,, as no countries have put forward actions without a GHG target.

Even countries with base-year targets are not directly comparable due to (among other factors) differences in the base years selected. The figure below shows the INDC targets for developed countries against the range of base years used so far. The selection of the base year has tremendous bearing on which countries appear to be making the steepest reductions. 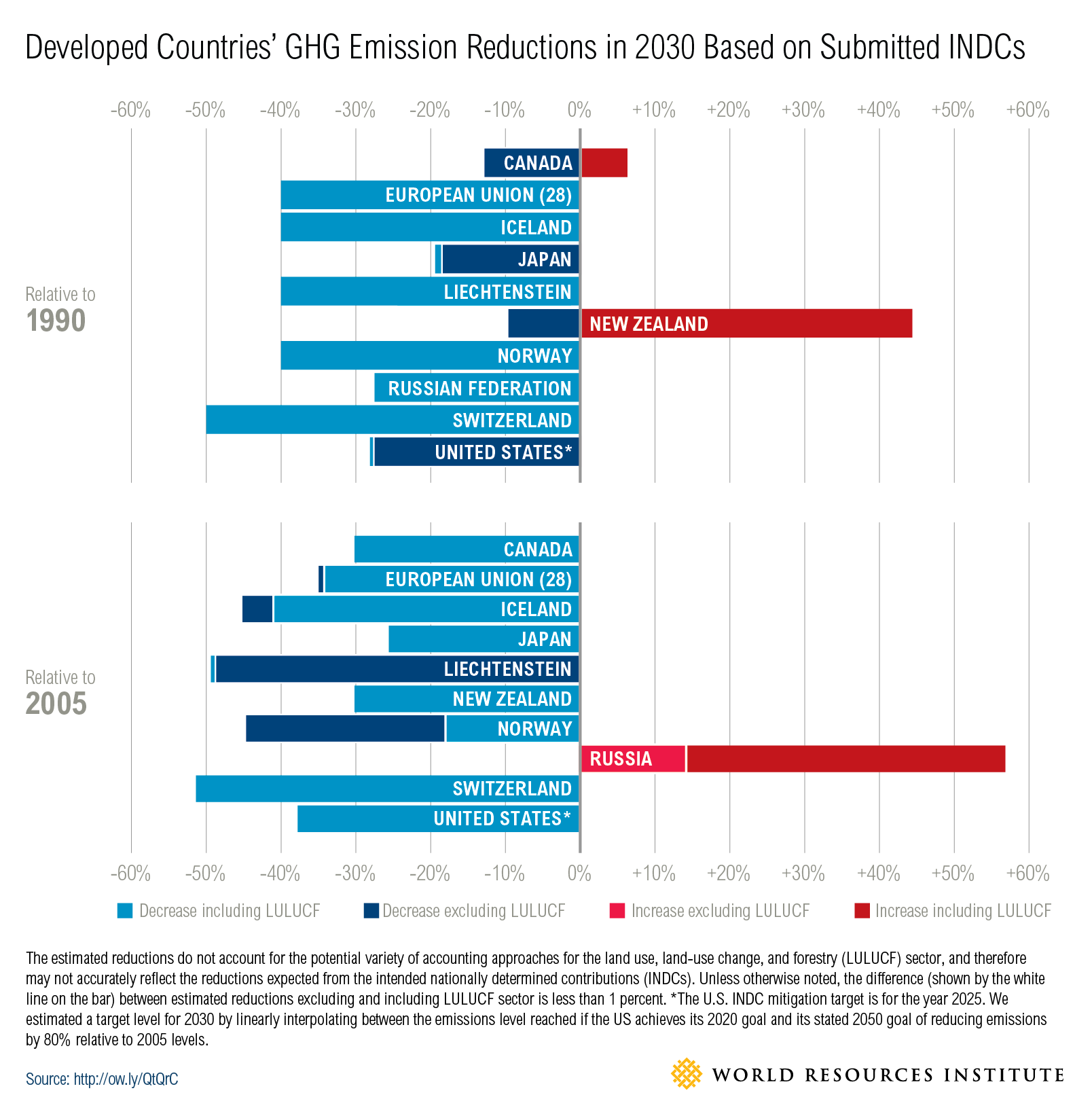 Another way of comparing mitigation targets is to examine their implications for annual decarbonization, the rate at which GHG reductions would occur, from 2020 to 2030. This illustrates significant differences among developed countries’ targets. Switzerland sets the benchmark at an annual reduction of more than 4 percent, though some of this reduction may be achieved through the purchase of offsets from other countries.

While the INDCs submitted to date get the world closer to keeping warming within 2° C (3.6° F), a level at which the most dangerous impacts of climate change are limited, there is more to be done to deliver on this global objective. Elements of the Paris agreement will be crucial to keeping the 2° C goal within sight.

Under the U.N. Framework Convention on Climate Change (UNFCCC), countries are expected to describe how they consider their contributions to be fair and ambitious, in light of their national circumstances. Fairness can be a catalyst for increasing ambition, and ensure meaningful participation by all countries ahead of COP21. Like ambition, there is no single formula or metric to determine whether a contribution is “fair,” but a number of key indicators provide guidance.

Many countries (such as Mexico, Morocco, Liechtenstein, Andorra, Singapore, Japan and Marshall Islands) have explained their emissions “responsibility,” either through percentage of global emissions, current and projected emissions per capita or historical emissions. Other countries, such as Ethiopia, Marshall Islands and Switzerland, also discussed their capacity to reduce emissions, factoring in economic and development indicators such as Human Development Index, GDP, GDP per capita, and energy access. For countries with limited capabilities and high vulnerability, prioritizing measures that achieve adaptation and development co-benefits has been important (as in the cases of Ethiopia, Mexico and Morocco).

China and Canada were the only countries that didn't explicitly address fairness, while some countries such as the United States provided only minimal information on these issues.

Transparency is critical for allowing us to understand whether the INDCs are collectively ambitious enough to limit global temperature rise to 2°C, as well as to foster accountability, trust and understanding among countries. WRI laid out transparency criteria in consultation with governments under the Open Book project.

While countries are generally providing more information in this round of INDCs than they did five years ago, the commitments submitted so far are not uniformly transparent. Several countries—such as Singapore, Switzerland and the United States—have adhered closely to the Open Book suggestions. Critical information gaps exist, however, in many INDCs. These center largely around assumed land sector accounting approaches, assumed use of market mechanisms, the assumptions underlying baseline scenarios, and the expected emissions levels in peak years and target years. This is a problem because meaningful analysis and comparison of countries’ INDCs depend on detailed information about how they’ve approached their targets.

What Can We Conclude About the INDCs to Date?

The bottom line is this: INDCs collectively are both encouraging and inadequate. On the one hand, they represent progress beyond business as usual, and cement a number of promising policy approaches for addressing climate change. With few exceptions, countries have put forward targets that both exceed the commitments they made six years ago and will require further policy interventions to deliver. In a number of cases, countries have spelled out in detail how they intend to move toward fundamental transformation in key economic sectors, for example by dramatically scaling up renewable energy or eliminating deforestation.

Yet on the other hand, the INDCs are inadequate in that they are not yet enough to limit warming to 2° C. It’s fundamental that the Paris agreement lay the groundwork not only to implement the INDCs, but to keep countries coming back to the table on a regular basis to re-up their commitments. Increasing ambition is fundamental to address the increasingly risky impacts posed by climate change.

China’s Climate Policies: How Have They Performed, and Where Do They Need to Go?