Australia’s just-announced plan for tackling climate change over the next decade proposes to cut emissions 26-28 percent from 2005 levels by 2030. Some of the country’s major peers, including the United States and European Union, are committing to more aggressive targets to drive down carbon pollution (the Australian target is different from the U.S. commitment to reach the same reduction level five years earlier, by 2025). Australia’s proposal would mean that other countries will have to do more to achieve the goal of limiting global temperature rise to less than 2 degrees C (3.6 degrees F) -- including developing countries with fewer resources.

Australia is likely to experience more global warming than the rest of the world on average, and its populace is deeply concerned about the threat of climate impacts. For instance, a recent poll found that 63 percent of Australians think the Abbot government should take climate change more seriously, while 72 percent of Australians agree that governments should implement a plan to facilitate a shift towards clean energy.

Let’s take a closer look at two examples of how Australia’s climate plan (also known as its Intended Nationally Determined Contribution, or INDC) stacks up against what other countries have offered.

Comparing Australia’s Proposal with Other Countries

In the run-up to global climate talks in Paris this December, countries have put forth emission reduction targets with different base years against which their reductions can be measured. As the graphic below shows, with a 1990 base year, Australia’s effort comes last behind Canada, the United States, the European Union and Japan. Using a 2005 base year, Australia fairs slightly better, with the United States and European Union putting forward notably stronger targets. 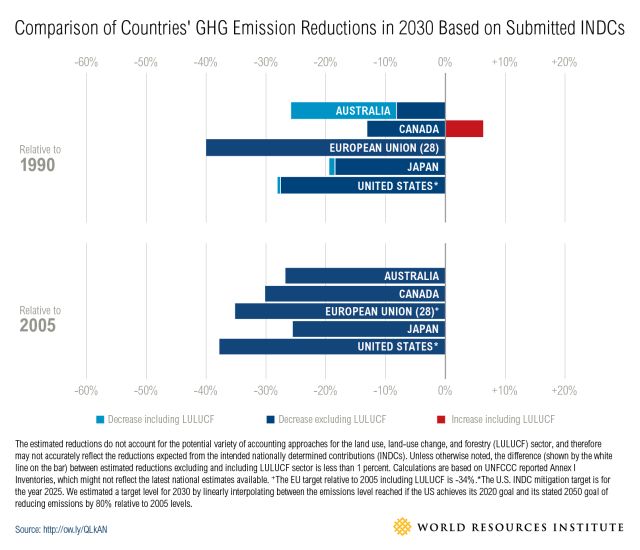 Another helpful way to assess countries’ level of effort is by comparing the annual rate of reductions these targets may require. According to WRI estimates, the EU and U.S. proposals aim to reduce greenhouse gas emissions between 2020 and 2030 by approximately 2.8 percent per year. Australia and Canada are at the back of the pack with 1.8 and 1.7 percent annual reduction rates, respectively. 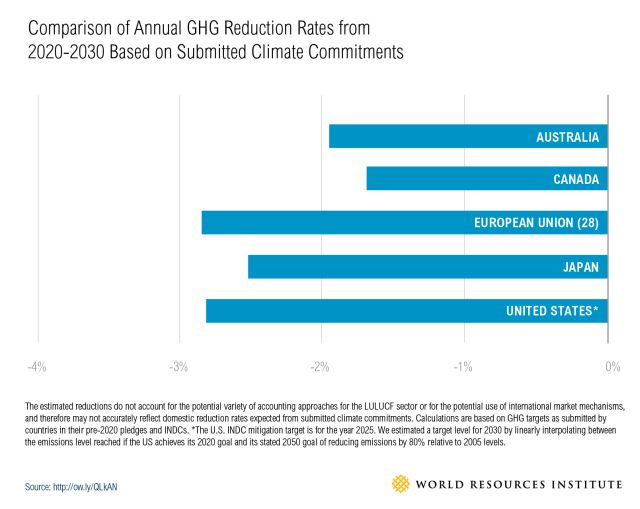 Australia’s status as the sunniest country in the world makes it ripe for solar power, and it also has huge potential for wind energy, but thus far it has failed to adequately invest in its abundant, affordable clean energy resources. With smart policies and more ambitious international targets, that can change.

The global community expects Australia to play a constructive role at the Paris climate summit, and its own citizens are demanding the government act more aggressively. As a highly developed economy and home to the iconic and valuable Great Barrier Reef, it is in Australia’s interest to reconsider this proposal and steer the country towards a safer and prosperous future.